OVER the past month, at least three international drug trafficking syndicates were smashed in Johor and the Klang Valley with drug seizures totalling RM100mil.

The syndicate busted in the Klang Valley last week, which had links to Australia, Japan and Taiwan, were even equipped with an array of weapons including pistols, hand grenades and a submachine gun.

In the raids in Johor last month, 25 people were arrested including seven Singaporeans, six Mexicans, one Canadian and a Thai. The rest were locals.

Unlike most criminal activities, which take place in secluded areas, these syndicates operated in residential areas in Kajang and Old Klang Road in the Klang Valley, and Taman Pelangi and Permas in Johor. 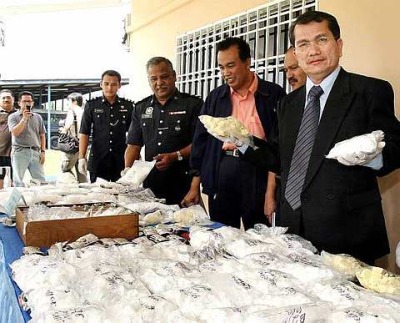 It is learnt that neighbours interviewed by police about the syndicate’s activities were oblivious to drugs being prepared and packaged in these homes.

Foreigners are playing an increasingly important role in running the syndicates and investigations showed that Singaporeans headed both the syndicates busted in Johor.

Last year, Inspector General Tan Sri Musa Hassan, during a visit to Johor, revealed that police had identified seven gang leaders terrorising the state with the help of influential people.

The IGP admitted that, besides locals, Singaporeans controlled certain areas in Johor.

The arrests in Johor involving 15 foreigners affirms that Malaysia, especially Johor, is a hot bed for Singaporean syndicates.

How did the Narcotics Department manage to disrupt these syndicates?

Definitely good intelligence gathering and networking between Bukit Aman and its counterparts in other states, and Singapore’s Central Narcotics Bureau.

A senior narcotics official from Bukit Aman pointed out that experienced officers played a vital role.

Many narcotics chiefs in major cities in the country had served the department for 12 to 20 years.

He said these officers were specialists in their fields and knew their stuff.

The officer pointed out that job matching was important as a person’s full potential was not realised if the wrong officer was matched with the wrong job.

Maybe it is time that other branches in the police, especially Criminal Investigations Department (CID), revamped to having crime busters running the show.

It is no secret that CID personnel get transferred to the General Operations Force (GOF) over the slightest of complaints.

Even officers who trained as anti-gambling experts, investigating officers and officers who opened case files against gangsters have not been spared of sudden transfer orders.

In fact, many commanders and deputy commanders in the five GOF brigades around the country are former CID men.

This figure even got Prime Minister Datuk Seri Abdullah Ahmad Badawi worried and security was included in the Barisan Nasional manifesto during the recent general election.

Abdullah, during a recent visit to Johor, affirmed the Government’s commitment to beef-up security in Johor, Penang, Perak and the Klang Valley.

Assigning officers without CID experience will slow investigations, as they will need time to learn the job before guiding their investigating officers.

The police cannot afford such delays as each year they investigate tens of thousands of new cases.

The time has come for the police leadership to form a special committee to look into proper streamlining of manpower to avoid wastage of talents, especially in the CID.

Instead of transferring personnel, including to Sabah and Sarawak, proper disciplinary methods should be considered as mass transfers only increase the operating budget by millions of ringgit.

Senior CID officers lying idle in certain positions need to be brought back and placed under the IGP’s office in Bukit Aman to enable them to coordinate operations nationwide.

Maybe this method should be implemented in Johor and extended to other areas perceived to be crime hotspots.

Proper human resource management coupled with the RM6bil allocated to the police to address hardware problems will ensure continuous success against organised syndicates.