THE once popular Mimaland Recreation Park in Gombak, Selangor, is a sorry sight in a dire state of abandonment. It has been like this for the last 15 years, after it ceased operation in 1993.

The recreation park used to be a popular premier outing destination for families in the Klang Valley.

After it was closed, many people had hoped that it would be renovated and reopened as the place was a convenient site for picnics, being not too far from the city and yet having a raw natural environment, with plenty of trees and plants and a lake for swimming, fishing and boating.

The wish for its rejuvenation may not materialise in the foreseeable future as the landowner Magnum Corporation Bhd has no plan to revive and redevelop it.

According to Magnum spokesman Cheah Ho Wee Hock, there is no plan to redevelop the recreation park in the near future and the land is being kept for the purpose of investment.

“It will be sold when the right price is offered,” Cheah told StarMetro during a telephone interview.

Until it is sold, Cheah said, the land would be left idle.

This is bad news for many who are hoping that the idle park, which started operation in the 1970s, will be given a new lease of life.

A StarMetro team visited the area about 25km from Kuala Lumpur, along the old Gombak-Bentong road, and found that it was undergoing a natural destruction process after left without maintenance since its closure in 1993.

The signs of decay caused by being abandoned for nearly 15 years is evident.

The arch that used to hold a welcome signboard is in deplorable state with overgrown creepers. The wooden shops near the arch are in disrepair and deserted.

A road leading to the park is covered with grass and undergrowth and also damaged.

Barricade in the form of hoarding have been placed at the entrance where the remnant of the office structure can be seen from a distance.

A solitary security guard was stationed bear the entrance to prevent trespassing and encroachment by unauthorised people.

The lookout towers, the office, bus stops and pillars have been left to rot, a sad reminder of the lost wonder.

It is also learnt that two security personnel are assigned round-the-clock duty to prevent unauthorised people and vehicles from entering.

However, when StarMetro visited the area, some people were seen fishing in the lake.

It is also learnt that some people had also gone there for camping.

Some nearby villagers also claim that wild animals, including tigers, have been spotted in the green forest with their pet dogs and cats failing prey.

In the past, the park had the country's first water-slides, a Pre-historic Kingdom featuring replicas of dinosaurs and related creatures of that era, a flower nursery, chalets built on stilts (called Bagan), a lake for boating and fishing, and other attractions.

The rundown buildings and chalets are only mere reminder of glorious past of this premier recreation centre, when the city folks used to enjoy camping or staying at the cosy water front chalets with their family members.

Villager Mohd Yusof Sarman, 52, who was born and lived in the area since, said that some people had claimed that they had seen a tiger at Mimaland although he had not seen it himself.

“When Mimaland was operating, we had more income from doing business with the visitors and tourists,” he said.

“I used to sell sugar cane water, Malay cakes, nasi lemak when Mimaland was operating but had to stop business after the park was closed,” Yusof said.

He said that the village had became very quiet since then.

Dasimah Abdul Hamed, 48, who has been staying there for 34 years, recalled that the roads were very busy when Mimaland was in operation, the safety of the village children was then a prime concern.

“I also used to make quite a bit of money from a foodstall nearby then. Now, business is slow and so is the traffic,” she said.

Normalah Baharim, 20, who remembered her happy childhood days, said that she would spend all her free time at Mimaland as her father was working there.

“Because I love the park so much, I kept a head of a hippopotamus outside my house to remember my sweet old days,” Normalah said.

“I used to remember playing at the playground, staying in the chalets and hotels for free as my father works there,” she said

The Kampung Batu 11 lass said those were the best moments of her childhood and many of her friends envied her for that.

The Mimaland was opened in 1975 and ceased operation about 15 years ago following some unresolved plans for expansion.

The natural setting of the park makes it a very ideal natural holiday resort. It is certainly regrettable that such a beautiful natural recreation park should be left in such a dismal and dreadful condition.

Perhaps, some visionary entrepreneur should consider buying the place and redevelop it into a natural country resort, offering recreational activities and weekend conferences and retreats.

It is also a good place for setting up an international tertiary educational centre for environmental studies. 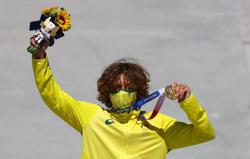