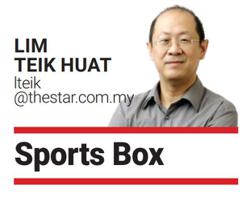 In a post on the Istana Negara's official Facebook page Thursday (Aug 4), Their Majesties expressed their sadness over his death and hoped that his family would be patient and persevere in facing this sad situation.

"Their Majesties greatly appreciate the service, deeds and contribution by the deceased to the country and regarded his death as a great loss to the country’s badminton sport," the post read.

The former national badminton doubles player died at the Hospital Raja Permaisuri Bainun (HPRB) in Ipoh at 4pm Wednesday. He was 84-years-old.

Ng and his partner Datuk Tan Yee Khan became champions the first time they represented the country at the All England Championship in 1965.

He also managed to give the Malaysian contingent a silver medal at the 1972 Munich Olympic when paired with Datuk Punch Gunalan. - Bernama