It started out as a desire to make books affordable, grew into a tiny bookstore (BookXcess) that sold books below retail prices, then flourished with its wildly popular annual Big Bad Wolf book sales. Andrew Yap, 39, is still amazed at what he and his wife Jacqueline Ng have achieved, writes JOY LEE.

Have you always liked books?

I know the importance of reading. My parents never read to me when I was young, and there was a huge difference when you look at friends and schoolmates whose parents read to them. Their English comprehension was so much greater. That’s why I’m a real advocate for literacy and starting from a young age.

Is that why you started BookXcess?

What were you doing before that?

I ran a workshop for cars. I’m a car person. I love motor racing. But racing cars is expensive. If you have your own workshop, you can get the mechanics to build the car you desire, that kind of thing. But I sold it because the book business was getting more serious and required more attention and time. Jacqueline, my wife, has an accounts background.

Andrew Yap, 39, is still amazed at what he and his wifehave achieved. Photo: SAM THAM/TheStar

We had about 120,000 books. And we didn’t know anything. Never ran an event before, never hired staff for events or did licensing.

But we did everything ourselves because we couldn’t afford an event organiser. We literally sweated blood. But it taught us a lot. The response was tremendous and that led us to do another one six months later, double the size. From then on, it became a yearly affair. And it just got bigger and bigger.

But we always listen to our customers. And one of the feedbacks was that they now have a lot of books they haven’t read. When this company started, the first thing on our minds was to get people to read. To discover the joy of reading, not buying.

Was there any concern going abroad?

I’ve got a huge risk appetite. If it’s not dangerous, then it’s not fun. When we decided to do Bangkok and Jakarta, we found that majority of them don’t speak English. So we thought this is one way to help them. It won’t be a solution, but it will be a start.

When we decided to go into Indonesia, a lot of friends who have dealings there said it was crazy. It’s a different culture there with a lot of red tapes. It was drama all the way.

But somehow, through some sort of miracle, things just fell into place. So did we have any considerations when we went in? We just thought Indonesia needs this, and we went.

Doing two new countries a year for the first time and only a few months to plan is already crazy. We don’t have time. But next year, we are doing China, Bangkok and Jakarta. We are hoping to squeeze in Vietnam next year. Then moving forward, South-East Asia. The dream is to do one in Brazil. I think it’d be cool to do it there, what with the favelas and all.

Is the plan just to keep expanding into new markets?

We always live for today. Other companies will have their 10-year projections and all. But we’ve never thought about stuff like this. We don’t have the time or expertise. Current revenue is about RM100mil. But I would be happy and proud if one day, we had a turnover of RM1bil. That is when I’d say that we’ve done it. After that? Don’t know lah (laughs).

But at the end of the day, I would like to give the company back to the employees. I like an employee-owned company. This company can never be sold or listed. It has to be run by passion. So it’s a go-along and see what happens.

And I would like to see if we can actually reach Fortune 500 level as a go-along company. And we can go back to zero tomorrow, I’d still be happy. I’m a very simple person and so is Jacqueline.

When all’s done, would you go back to motor racing?

Haha. Yes. The dream is to join Le Mans.

What are you reading now?

I’ve never really finished a book. My schedule is crazy! But what interest me is books like Send Them to Hell. I almost finished the book. I would read books more on self-help like Malcolm Gladwell and Paul Arden. 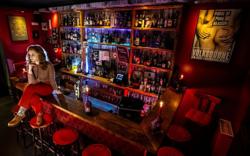