A scrum near the SMSS touchline during the finals.

Schools rugby is actively played across the country albeit in different forms. The more popular versions are the seven-a-side and 10-a-side tournaments staged throughout the year.

But some also prefer the conventional norm – the 15-a-side which is the requirement at the highest levels of the sport at the World Cup or in Test matches.

The Super Six Schools Rugby Tournament was organised in 2013 with a view to raise the status of the game and to grow the game at the grassroots stage. It remains as the only 15-a-side tournament for schools outside the bi-annual Malaysian Schools Sports Council tournaments.

“We wanted to give an opportunity to the schools to get the feel of international Test matches, that is by playing 15-a-side rugby, “ saidShahrizin Shaharudin, principal founder and tournament director.

“As you know most of the tournaments played in the schools belong to the sevens and 10s formats but we prefer this type of tournament even though it takes longer and more cost to organise.

“We are fortunate to receive support from corporate sponsors such as Malaysia Airports and others to make this event a success,” he added.

STAR and SMSS players lock horns in a well-fought final.

Shahrizin stated that the choice of the six schools was based on the fact that they were the crème de la crème in the rugby circle. The tournament is played in two stages – the round-robin league from where a ranking is derived before the knockout stage.

He foresees a bigger tournament next year. “We know there are many other good rugby-playing schools out there so we are thinking of expanding the tournament to include more schools.”

In this year’s tournament, the round-robin matches saw SekolahTuanku Abdul Rahman (STAR) finishing on top of the table with five wins while Sekolah Menengah Sains Selangor (SMSS) was second with three wins, one draw and one loss.

As it turned out the two schools proved their worth by making it to the final, where they contested for the Chairman’s Challenge Trophy at the Sayyidina Hamzah Stadium at the International Islamic University.

The two sides contested at a torrid pace either pushing through the middle or using the flanks. STAR opened accounts through a try by Nadzmi Hakim Jamaludin who made it 5-0. Teammate IlhamyIshraff Ahmad Fadzil successfully converted to make it 7-0.

A SMSS player rises high in the lineout ahead of his opponents.

But SMSS were not daunted by the deficit fighting back grittily with a try from Muhd Irfan Syafiq to make it 7-5. MuhdShateer’s conversion brought relief and satisfaction to the SMSS supporters as they drew level 7-7. The score line remained the same until half-time.

It was SMSS who turned aggressor after the interval with a dropkick goal by MuhdIsyraf that gave the team the lead for the first time at 10-7.

But STAR battled back gallantly with a try by MohdArif Zaidi to retake the lead at 12-10. They struck again with a try by Aizi Putra making it 17-10 before teammate IlhamyIshraff Ahmad Fadzil made the conversion to take the scoreline to 19-10.

SMSS made a valiant effort to bridge the gap with a try byMuhdTaufiq to make it 19-15. They failed to convert and STAR kept them at bay to emerge as deserving winners.

STAR’s llhamyIshraff Ahmad Fadzil was named as the best player of the tournament. 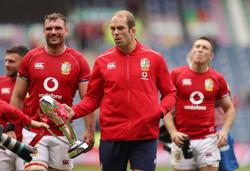