YOUNGSTERS got a crash course in the skilful art of footwork with four weekends of futsal fever at Milo’s Champions Clinic.

The clinic prepared parents on the trials and joys of guiding children with an affinity for sports. It also consisted of a personal sharing session with parents that provided tips on supporting their children’s active lifestyle. The mentors included experienced parenting coaches in their own right as part of Milo’s campaign that inspires the spirit to ‘Never Give Up’.

“Instead, be involved, try to know the rules of the game, learn the tactics and make it a point to travel as a family when they compete,” he said. Nurdhiyaa with mother Norizan as she shows off her medal and certificate of participation.

When asked by Mohd Arif Liew Abdullah, 51, a father of four, about motivating children through their failures, Abdul Hadi said, “As long as we keep on trying, we have not failed.

“Sports is not just about winning, it’s also about how it moulds people into becoming good human beings.

“You have to be close to your children, make them trust you and open up about their problems; only then can we know what is stopping them from winning,” he added.

Mohd Arif, who once played with Harimau Malaya, comes from a family of football players, so it came as no surprise that three of his four sons decided to follow in his footsteps.

“It’s been a big challenge raising sons in sports, and although my eldest is more studious, the other three naturally picked up futsal and soccer.

“My 13-year-old, Azim, also plays with the Ombak FC under-14 team, which was picked by Milo and Astro’s Takkan Gentar reality series.

“I think it was not because of their skills as a team, but what appealed most to them were the parents’ cooperation during training and how the players could work together,” he said.

Norizan Harun, 36, is the proud mother of the only girl at the clinic.Nurdhiyaa Addin, 9, who signed up for Milo’s futsal training programme in Selangor, was accompanied by her mother every weekend. Mohd Arif knows the challenges that come with bringing up children who are active in sports.

“Our family loves watching football and I think that’s where her high passion for it came from.

“But that passion had to start from her and her interests; all I can do is to show my support by following her for every tournament and training session,” she said.

The event ended with SEA Games gold medallist Welson Sim, 18, who started swimming at age 10, taking to the stage.

“I am still young so I don’t see the need to give up. No matter what happens, never give up following your dreams.

“My dream is to be the best swimmer in the world and I am now training to qualify for the Olympics,” said the determined youngster. 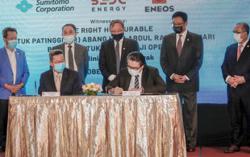