UiTM do the double

UiTM won a grand double in the QNET-Selangor Hockey League (SHL) when they were crowned overall champions.

UiTM, the Division One champions, won the QNET Challenge Trophy when they defeated Bukit Jalil Sports School (BJSS) 10-1 in the final for the overall title at the Tun Razak Stadium in Jalan Duta.

The final was an anti-climax as BJSS, comprising a group of youngsters, were unable to match UiTM, with several seasoned and experienced players on their side.

It did not take long for UiTM to score their opening goal. It came in the fourth minute when Muhamad Hafiz Zainol scored from a penalty corner. 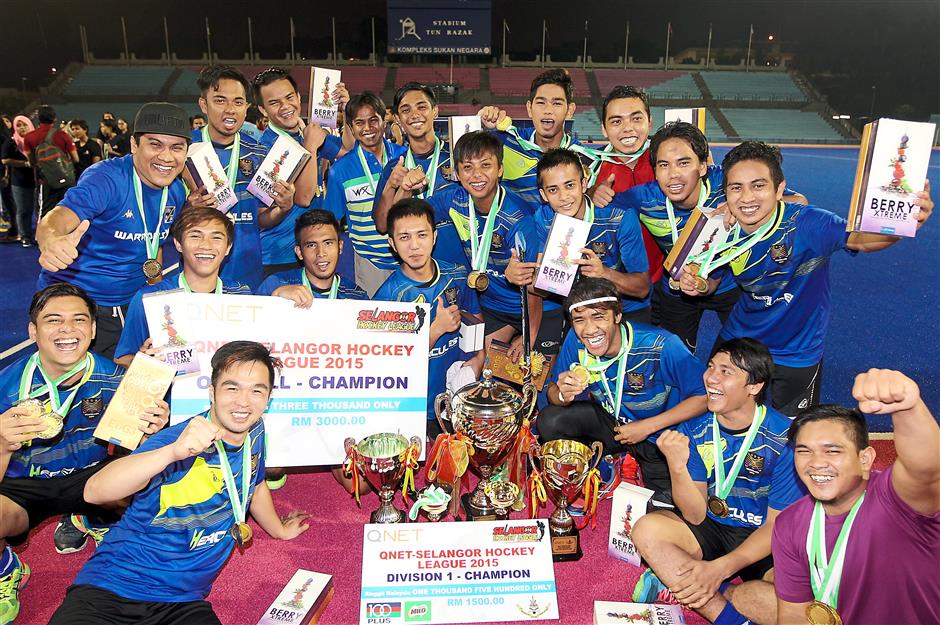 UiTM players celebrating with their challenge trophies and individual awards.

BJSS’ only goal came from Mohd Rahimi Rosley in the dying minutes of the game.

UiTM’s Muhammad Noor Faeez was named as the Best Player of the Tournament and his teammate Muhamad Hafiz Zainol was presented with the Man of the Match (final) award.

KJLJD were third after a 2-0 win over Selayang.

For UiTM, it was their third silverware. Last month, they won the Division One title in the Malaysia Hockey League(MHL).

UiTM team manager Ahmad Tarmizi was elated with the win but surprised with the big margin. “We defeated BJSS 6-4 in the league. It was a close match and we had expected a tough time once again. But our players gave their best and got the goals.

“It has been an impressive season. We have to commend the players for their excellent results. They were consistent throughout the season.

Although BJSS were beaten in the final, they should be commended for their progress. En route to the final, BJSS, who finished fifth in Division One, defeated RAMD 3-1 in the quarter-finals and upstaged KJLJD 6-4 in the semi-finals.

BJSS coach S. Prakash praised his players, all aged below 16, for making the final.

“Most of them were playing in the final for the first time and that was an achievement. The atmosphere was also different. But I am pleased with their attitude. To be frank, we also had some good scoring opportunities but the forward, due to their lack of experience, missed them. “The only setback was the big margin. Otherwise it was a valuable exposure and something which the players had to face,’’ said Prakash.

Ganesh said despite the haze and weather conditions, the SHA had completed the season on schedule.

“We have to thank the participating teams for their excellent cooperation,’’ said Ganesh.