Pusat Pakaian Hari Hari has now embarked on supporting sports in the country by making its inaugural sponsorship in a seven-a-side football championship at Stadium Kajang starting tomorrow until Nov 1.

The store, which is a leading distributor of shirts, uniforms and apparel, is sponsoring this championship as part of its corporate social responsibility.

“Previously we used to distribute school uniforms to the poor as well as assist in the production of local dramas that were popular. Football is a popular sport worldwide and locally.

The football following in Malaysia is huge and we want to be part of it while giving back to the community,’’ said Pusat Pakaian Hari Hari public relations manager Amilludin Latip.

Thirty-two teams are expected to take part in this championship. The other sponsors are Revive, Munich and Molten.

The champion team will receive RM1,500 while the second and third placed winners will get RM1,000 and RM500 respectively.

There are also prizes for best player and top goal scorer.

Sport , Central Region , Seven a side futsal in Kajang 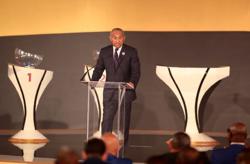