Cause for celebration: The champions with their trophy after topping the round-robin Bauer tournament.

KELANTAN clinched the Bauer Under-19 Inter-State Division One Cricket Championship and did so with a flawless record as they finished the round-robin competition unbeaten.

The winners, who were third in the one-day competition last year, tipped the scales in their favour with their victory over Kuala Lumpur that left the latter in second place.

In the last match of the league fixtures, and one played at the Kiara Oval in Bukit Kiara, Negri Sembilan beat Selangor by 45 runs to secure third place.

Negri Sembilan were put into to bat and reached 200 before being bowled out in 47.5 overs.

Islah Muhaimin top-scored with an unbeaten 48, while captain Anwar A. Rahman chipped in with 42 runs and Haziq Hashim 30.

In their run chase, Selangor managed a mere 155 before being bowled out in 41.5 overs.

Ahmad Zubaidi Zulkifle, who made 60, and Vimallan Palaniandy 28 and Divakaran Santhosam 20, propped up their innings. 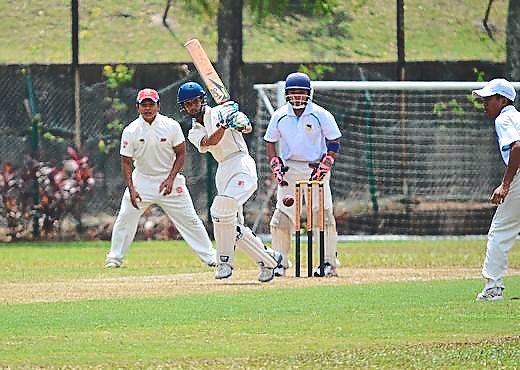 Pride of Kuala Lumpur: Batsman Arjoon had his team finish second in the event.

For their exploits in the 50-overs championship, Kelantan were also rewarded with two of their players winning individual honours.

Mahathir bagged a total of 15 wickets during the competition, with a best 7-21 highlighting his bowling stats. He also scored a total of 145 runs and a hundred thrown in as his best with the bat was 102. 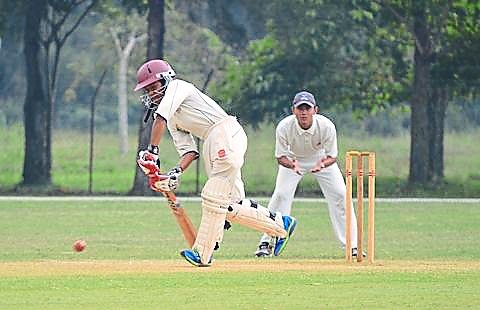 Technique: With a straight bat Mohd Shahril plays the ball down the line.

Kuala Lumpur’s Virandeep Singh collected the Best Batsman award, on the back of 194 runs scored and a highest of 117, against Selangor.

His teammate Muhammad Hafiz Khair took the Best Bowler honours, having claimed 16 wickets in all, and with an outstanding seven wickets for no runs, in the match with Sabah.

This year’s prizes were sponsored by Kasel Sports, who are the official equipment partners of Malaysian Cricket Association.

The four top teams in the tournament, Kelantan, Kuala Lumpur, Negri Sembilan and Selangor, will now go through to Premier League showdown, schedule for Aug 1 to Sept 17 in the two-day format of the game. Brimming with excitement: The action was plentiful in the Bauer Under-19 tournament and enjoyed in equal measure by the players and spectators.

Speaking of this, Dinesh Muthurama, the Malaysian Cricket Association’s development manager said, “The Premier League has been designed to provide the pool of the better players the opportunity to test their patience and endurance in applying their batting and bowling skills over a longer format of cricket.

“The national association continues to find ways to improve our players and we believe these players will no doubt benefit from it.”

“Playing in these sort of conditions and getting our players to familiarise themselves with the protracted game will hold our teams in good stead when we come up against sides like, Afghanistan, India and Sri Lanka, for example,” he added.

Virandeep Singh (KL): Scored 194 runs with a highest 117 against Selangor.

Muhammad Hafiz Khair (KL): Took 16 wickets with a best performance of seven for no runs against Sabah.

Mohammad Mahathir Razali (Kelantan): Took 15 wickets with a best of 7 for 21 runs and scored 145 runs with a best performance of 102.