Penang squeak out a narrow win, thanks to an own goal by opponents

Splendid defence: Penang’s Moreira (No. 10) is left sprawling on the ground after Kuantan FA’s Kwang Hyeong (No. 25) slides in with a tackle.

THE Penang Panthers failed to be as lethal as they could be and did just enough to send their fans home happy after their opening Premier League assignment.

Unlike the Kedah Eagles which clawed their way to an impressive 5-1 victory over Kuala Lumpur SPA Putrajaya FC at the Darulaman Stadium in Alor Setar, the Penang Panthers gave a lukewarm display at the City Stadium in Penang.

Despite their dominance over newly promoted Kuantan FA, they lacked the killer touch.

For their win, the Panthers had to depend on an own goal by their former South Korean defender Lee Kwan Hyeon, who was drafted to join Kuantan FA.

Brazilian coach Jacksen Ferreira Tiago, who was roped in to chart Penang’s chase for a promotion to the Super League, admitted that there was still much to be done.

“Frankly, I have no complaints as far as our performance and the outcome of the clash are concerned, 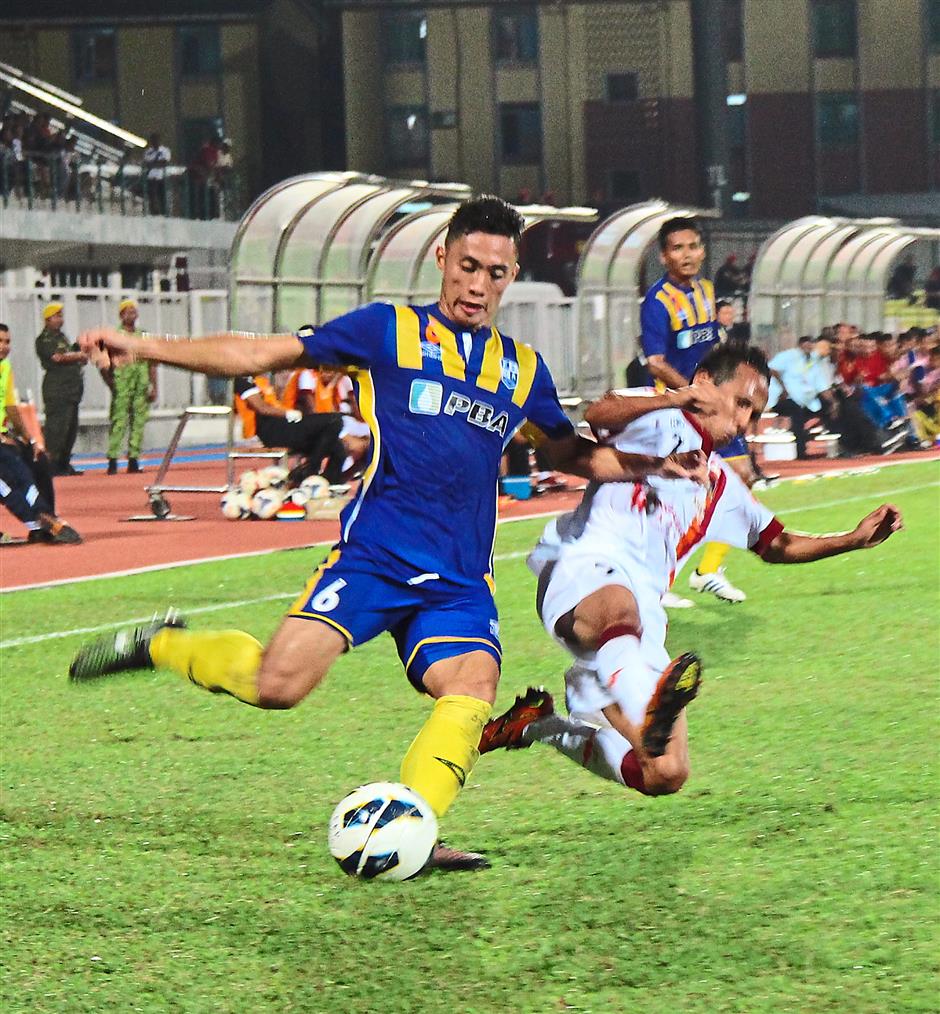 “Although, we had to rely on an own goal to grab maximum points, our creativity and ability to penetrate Kuantan FA’s tight defence were enough to keep everyone happy,” he said.

Tiago was quick to add that their inability to score goals was a problem.

That, he stressed, would have to be quickly ironed out when they get back to training to prepare for an away assignment against Terengganu T-Team in Kuala Terengganu tomorrow.

The coach, who enjoyed a brief stint as coach of the national Indonesian team prior to his arrival in Penang, said such teething problems were normal for most teams, particularly in season openers.

Determined to get their new season off on a sure footing, the Panthers came roaring out from the beginning of the match against Kuantan FA.

They twice threatened to draw first blood barely three minutes into the game.

But if it was not to be as Hilton Mauro Moreira misfired both his attempts, to the disappointment of the Penang bench.

However, these two, so lethal as goal poachers in the pre-season warm-up games, seemed to have left their scoring boots at home.

There were numerous missed chances but no attempt hit the mark.

As if to rub it in, former Penang defender Kwan Hyeon was in good form for his new team.

Kwan Hyeon and his fellow defenders did a good job by effectively setting up their offside traps to frustrate Penang’s raids.

Their ability to stop the marauding Penang Panthers allowed Kuantan FA to keep a blank score sheet at half-time.

Kuantan FA then returned for the second half looking more determined than ever.

Kuantan FA’s other imports — Moroccan midfielder Tarik El Janaby and Montenegro striker Milan Purovic — were on offensive mode and they gave Penang some anxious moments in the second half.

Luckily for the Panthers, their Brazilian defender Oliveira Reinaldo Lobo proved to be a pillar of strength in organising his defence.

This enabled the Panthers to neutralise the brief Kuantan FA threats.

There was trouble for Kuantan FA in the 53rd minute when Kwang Hyeon, in a bid to turn away fellow South Korean Lee Gil-Hoon’s cross which came screaming past the face of goal, put the ball into his own net.

The mistake give Penang the lead.

The own goal rattled Kuantan FA, allowing Penang to regain control of the game.

The Panthers continued their squandering ways in front of goal, unable to take advantage and the score remained 1-0 until the end of the match,