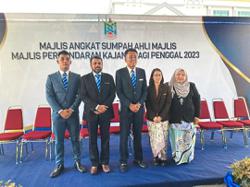 BANGI MP and lawyer Syahredzan Johan is planning to set up a legal clinic in the constituency, sometime next month.

He said the details were being sorted out but his team would look into several locations, including his service centre.

“The legal-related matters people tend to ask about are concerning labour laws and local council. I will seek help from councillors on the latter,” he said.

Balakong assemblyman Wong Siew Ki said that domestic or marital-related matters would be referred to the Pusat Wanita Berdaya (PWB) legal clinic under each state constituency.

Syahredzan also said that Bangi was the largest constituency in Malaysia in terms of number of voters and residents.

“I am also planning to organise an inter-parliamentary esports competition to reach out to younger constituents in addition to meeting as many Bangi residents to understand their issues and needs,” he said, adding that there were more than 680,000 people living in the constituency.

At the next parliamentary session, Syahredzan said he would raise local issues with the relevant ministries as well as an appeal to the Federal Government to repair a slope in Bukit Mewah, Kajang as the local council lacked funds.

Syahredzan, who has taken over the office previously occupied by former Bangi MP Dr Ong Kian Ming, is also setting up an online platform for the public to lodge complaints.

The complaints will then be channelled to the respective authorities for further action.

“The designs are of stalls or shops in Balakong as this is my way of helping promote local businesses and encouraging tourism,” she explained.

The zone was previously handled by Edward So.

“I’m familiar with Zone 4 as I served as So’s assistant for three years.

“Most of the issues there are related to infrastructure.

“A landslide incident happened in Taman Cheras Perdana last year and repairs have since been completed.