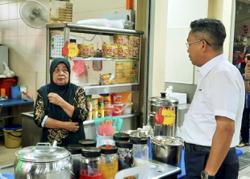 DBKL put up a noticeboard on the proposed redevelopment of the former Lanson Place condominium at Jalan Ampang Hilir, Taman U-Thant, Kuala Lumpur.

A PROPOSAL to build two high-rise condominium blocks in Jalan Ampang Hilir, Taman U-Thant in Kuala Lumpur, is causing unease among residents in the area.

The development proposal covers 1.45ha of land and comprises a 43-storey block and a 20-storey block with a total of 457 units.

The proposed project will take place at the site of unoccupied Lanson Place (Kondominium 8) which will be demolished to make way for the towers.

While residents are not against the development itself, they are unhappy with the project’s new population density as the area comprises mostly low-and medium-built residential blocks.

“The project will have a huge impact on the area if it is not scaled down.

“Most homeowners in this area purchased their property because it is a mature and low-density area.

“The highest blocks are no more than 10 or 12 storeys high, which suit the existing infrastructure.

“The new development should remain low-density to suit the rest of the neighbourhood,” he said, adding that they had until May 29 to send in their objections.

He said drainage and other infrastructures in the area could not cope with the added stress.

“In 2020, there were sinkholes nearby Jalan Taman U-Thant.

“Floods too are a common occurrence and have not been addressed,” he said. Lor says the project will have a huge impact on the area if it is not scaled down.

Committee member John Priamo said traffic in the area would surely increase with the added units.

“Peak-hour traffic is already at a standstill, what more with the extra vehicles once the project is completed.

“We also foresee a lot of roadside parking should there not be enough parking bays within the premises.”

“These are single carriageway roads that lead to busy Jalan Ampang and there is no more space to expand the roads.”

The residents added that if the proposed project was approved, it could set a dangerous precedent, whereby land meant for low-density structures could be used to build high-rise buildings.

Lor added that residents had sent in their objections.

They hope DBKL will take their concerns into consideration and scale down the project.

“For now, the Traffic Impact Assessment has been completed, including modelling traffic flow during peak hours and taking future projections into account.

“The findings have revealed that the existing road and junction capabilities will adequately accommodate the new development,” he said in a statement to StarMetro.

He added that the company would be building a residential development at a lower plot ratio of 1:4.5 which is below the permissible level of 1:6 for this area.

“The land came with old condominiums that have limited potential for market value appreciation.

“We aim to rejuvenate this into a vibrant upscale development that will provide city folk with secure and smart living in this prime location.”

On parking concerns, Chee said there would be adequate parking space with two to four parking bays per unit.

“We are already in contact with the residents and are committed to ensuring that this project is developed responsibly in a manner that is respectful to those living around us.”

Meanwhile, Kuala Lumpur mayor Datuk Seri Mahadi Che Ngah said public feedback as per Rule 7 of the Planning (Development) Rules 1970 would be given due consideration.

“Their concerns will be brought to the one-stop centre (OSC) meeting where the committee will discuss and deliberate the proposal,” he said.