Rosli showing some of the prizes offered in two competitions organised by the Perak DOE to encourage people to recycle their e-waste this year.

AS WE embrace the trappings of a modern lifestyle, our homes have become cluttered with electronic appliances both big and small.

But as the pile of used computers, gaming consoles, mobile devices, batteries and other electrical equipment grow, the problem of their disposal or ensuring they are recycled becomes ever more pressing.

Improper disposal of electronic and electrical waste (e-waste) can have damaging consequences to the environment because of the toxic materials in them.

Thankfully, there is a growing awareness at least among some segments of society, namely the younger generation and non-governmental organisations, about the dangers of e-waste.

Digital analyst R. Charroogesinee, 26, feels that the community in urban areas is more open to adopting recycling of e-waste.

She said social media played an important role in educating the community on the importance of reusing and recycling materials that might pose harm to the environment.

“More people are embracing pre-loved wearable and refurbished devices these days, including me,” she observed.

Charroogesinee added that with consumer technology evolving more rapidly than ever, the younger generation seemed to be more aware of the consequences of improper disposal of e-waste.

“On the contrary, the older generation is still far behind, firstly in understanding the use of technology, and secondly the importance of recycling them safely,” she said.

An avid recycler, Charroogesinee noted that in her younger days, she used to drop off dead batteries into boxes placed at shopping malls after she first became aware of the need to recycle these items.

> TURN TO PAGE 3However, she said despite many years passing, the awareness level on e-waste has not increased all that much, although our lives revolve around technology more so than ever.

It is not just small items that need to be recycled, as big-ticket electrical equipment need proper disposal too.

Advertising representative Shirley Yew, 44, said these days, if she had to replace big electrical items like television, refrigerator or air-conditioner, she would ask workers from the store to help her take away the old items.

Yew said since she did not know where to discard such items, it was easier to give away the items to the technicians or delivery workers.

“I do not want to simply leave it just anywhere, so it is better to hand it to them, as they may know what to do with the items.

“As for my old mobile phones, I still keep them, unless I get a good trade-in deal from a vendor.” Campaigns increase collectionE-waste collection and recycling is something the Perak Department of Environment (DOE) has been actively involved in over the past few years.

Its director Rosli Zul said the department had been organising e-waste campaigns in the state since 2019 and fine-tuning them as they go along.

For this year, he said the department exceeded its collection target, where more than 250 tonnes of e-waste, including bulky items, had been collected so far.

“We revised our strategy by holding two separate competitions just recently (Sept 10 to Oct 21) involving all 15 local councils in the state and 25 private companies.

“We were able to collect 150 tonnes of e-waste during that period.

“During the same competition last year, only 44 tonnes was collected and the total collection for that year (2020) stood at 65 tonnes,” he added.

Rosli said people who handed in their e-waste to the respective councils received cash tokens, besides being eligible to take part in a lucky draw competition.

Rosli said the department was working with three licensed contractors this year to ensure smooth collection process for e-waste.

He said the 15 local councils were eager to collect as much e-waste as possible by having their own programmes to come out tops in the competition, as were the 25 companies that participated.

“We found this approach effective and we will continue to fine-tune the competition next year.

“Without a strategy, it is pointless to have collection centres set up all over,” he added.

Rosli said the department welcomed more contractors to work with them in the disposal of e-waste according to the stipulated guidelines.

“Usually, scrap metal dealers will collect such items and take what is valuable to them but the hazardous items are not disposed of properly.

“So if they have proper facilities for the disposal, such outlets are most welcome to work alongside the department,” he added.

Rosli said Perak DOE had to come up with programmes, campaigns and competitions on e-waste to create awareness among the public on proper disposal methods for the next five years.

“After that, people must be more disciplined in ensuring that they dispose of the items at the right places, without expecting remuneration.”

On the disposal of dry-cell batteries, mainly from households, Rosli said the department had a separate campaign for this.

However, he said more had to be done as the campaign had not been effective.

“We have collection boxes placed at shopping centres, among others.

“But the real question is how many people are going to bring batteries from their houses to the malls to place it in the boxes provided.

“For them, it is much easier to just discard the batteries into the bins,” he said, adding that more concerted programmes and strategies were required to instil awareness and increase participation of households in this matter.

Ensuring proper disposalIpoh City Watch president Richard Ng lauded the efforts by the authorities such as Perak DOE in creating awareness among people on the importance of proper e-waste disposal.

He said before this, there was no proper place or avenue for people to discard their e-waste, leading to their dumping the items by the roadside and in the jungle or rivers.

“Before the pandemic, there were a few shopping complexes that placed e-waste bins to collect smaller items such as batteries and mobile phones, but there was hardly any avenue to discard the bigger items,” he said.

Ng hoped that in future, local councils would work with licensed e-waste collectors to place bins at convenient locations for people to discard unwanted electrical and electronic items, and not just in malls.

“Some sort of incentive, such as using a reward point system, should be introduced, offering cash or shopping coupon redemption,” he added.

Sahabat Alam Malaysia field officer Meor Razak Meor Abdul Rahman, however, thinks we have a long way to go in terms of changing habits when it comes to recycling technological consumables.

He said the level of awareness on environmental well-being among society in terms of recycling e-waste was still low and a cause for concern.

Most people, he claimed, were still not aware of the impact of discarding e-waste haphazardly.

“Similarly, some in our society are still unaware of the impact of plastic and polystyrene-based solid waste that takes too long to decompose and its impact on the ecosystem.

“If basic practices such as the 3R (reduce, reuse and recycle), waste segregation, energy and water resource conservation as well as healthy lifestyle practices are not cultivated in society, it will be difficult for us to adopt global policies,” he added.

Meor Razak said commitment and continuous action from the authorities was needed to provide awareness to the community on the importance of managing solid and e-waste efficiently. 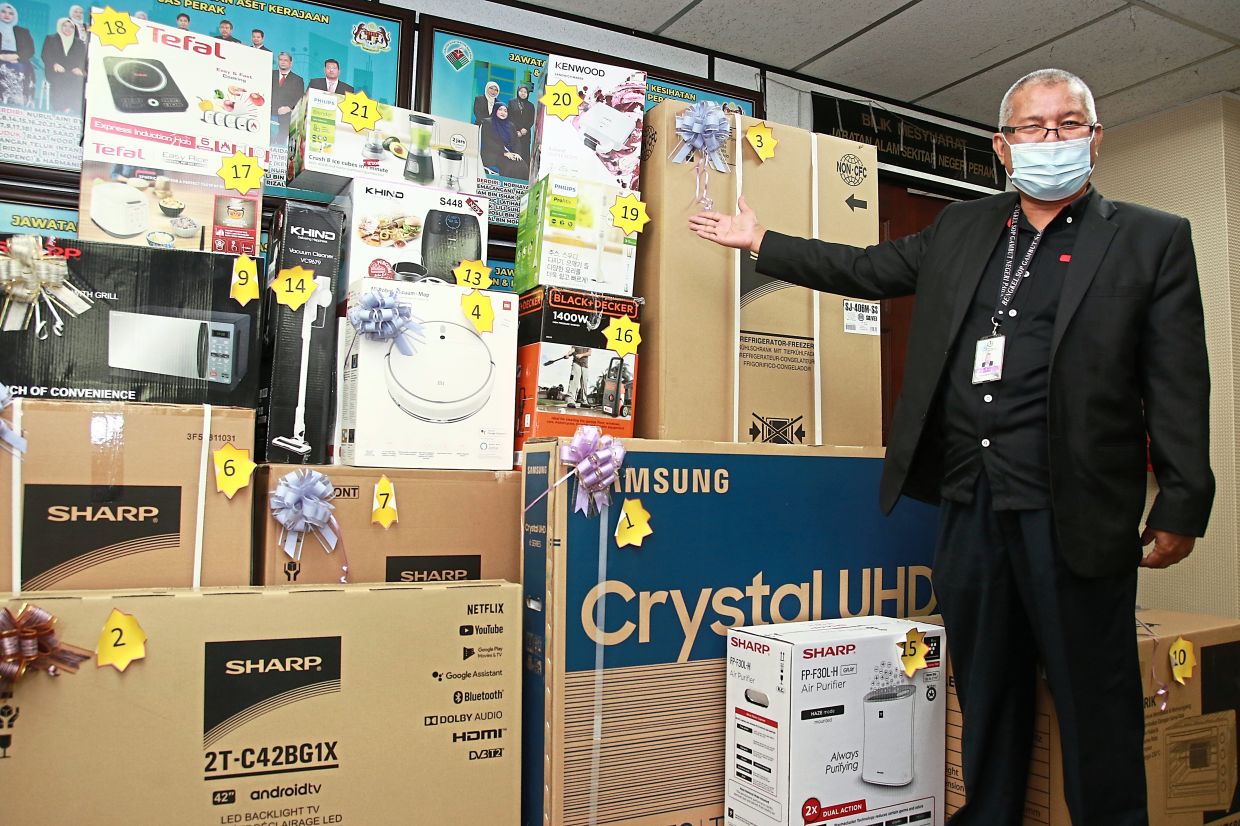 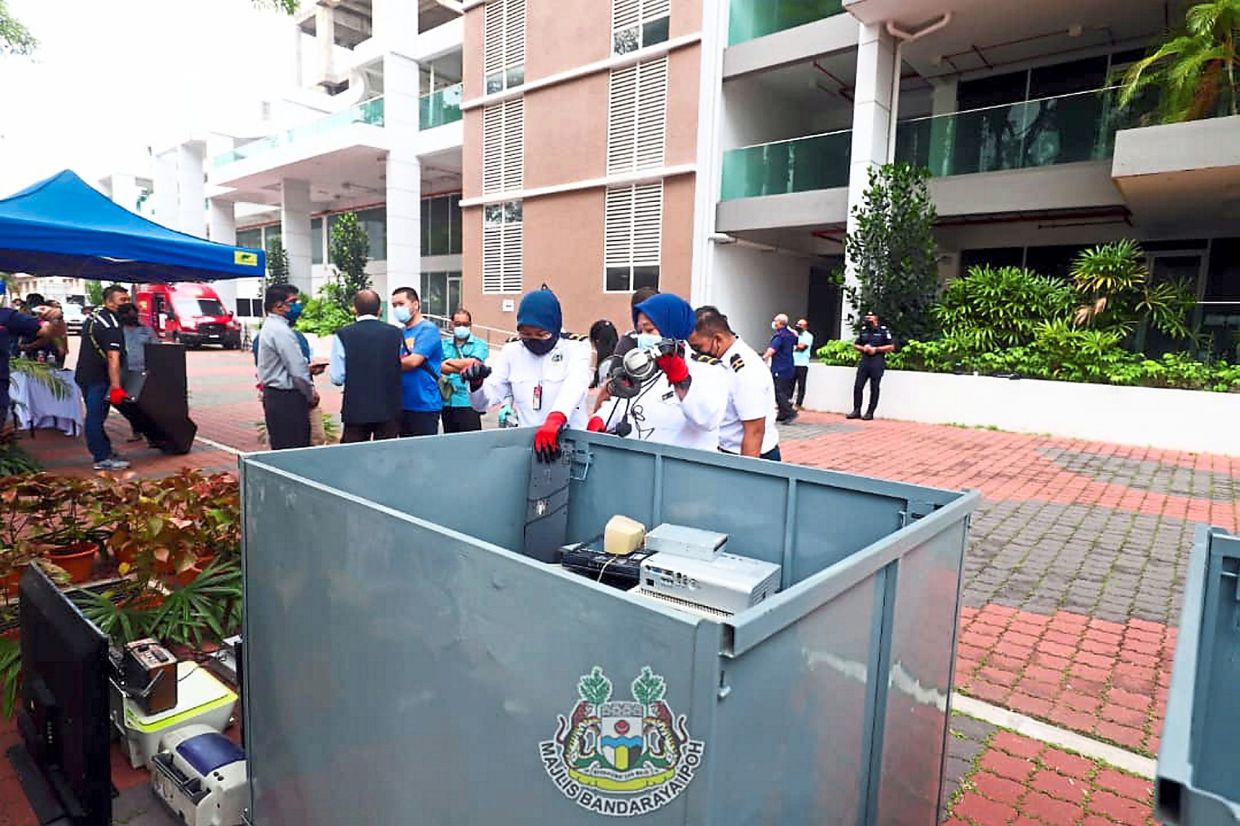 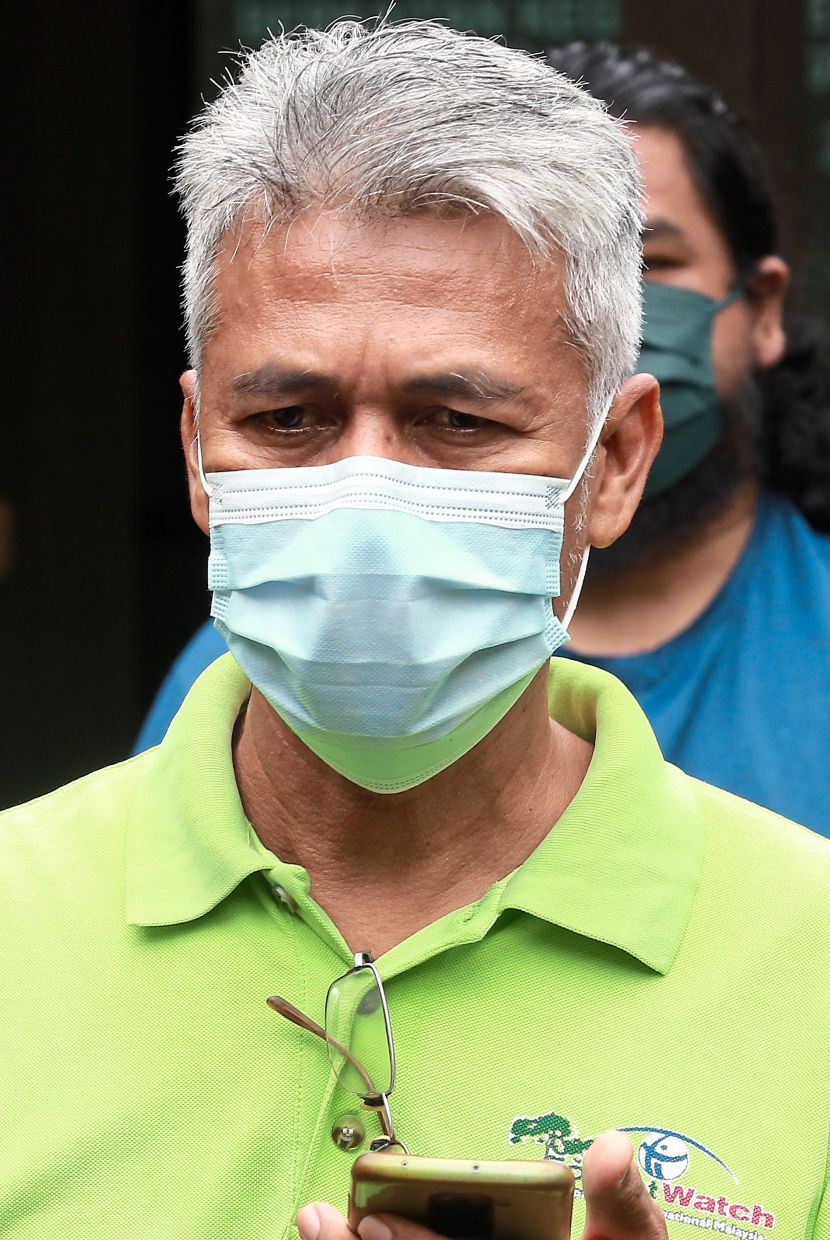 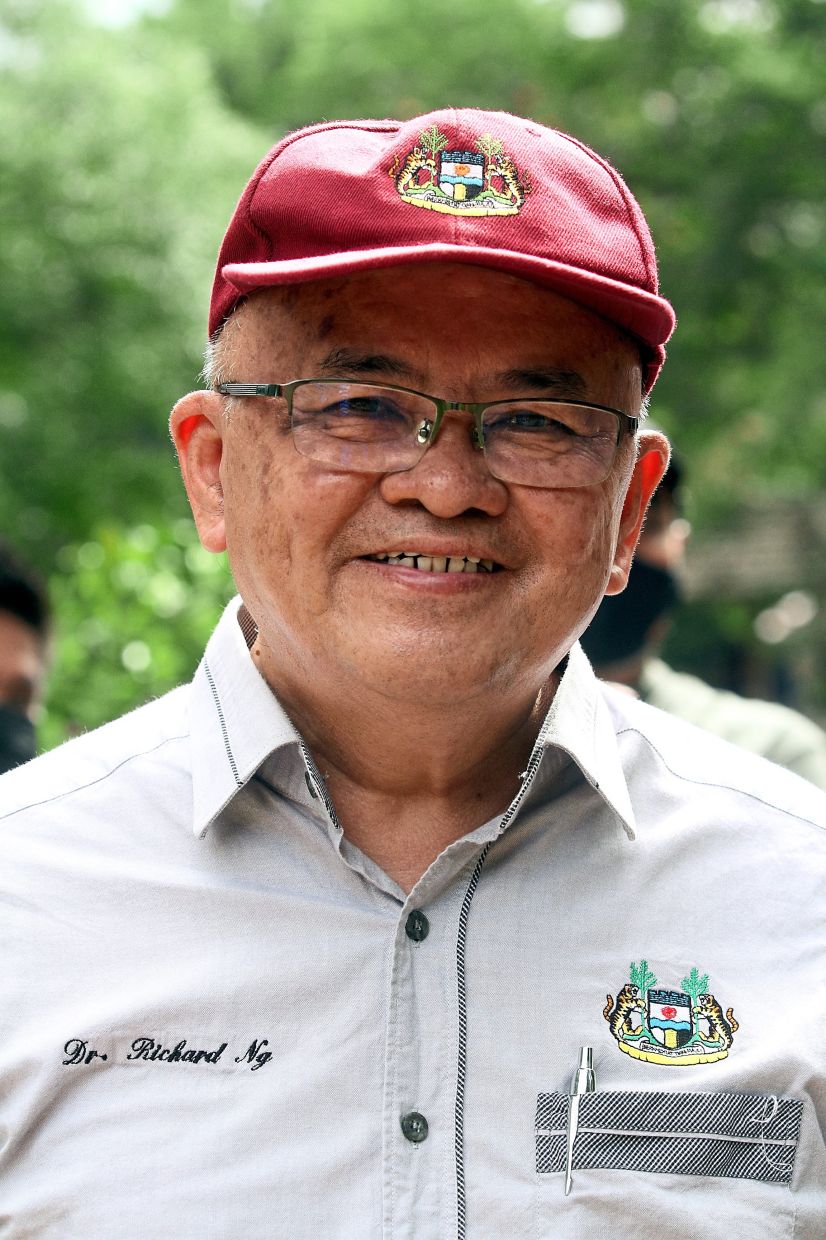 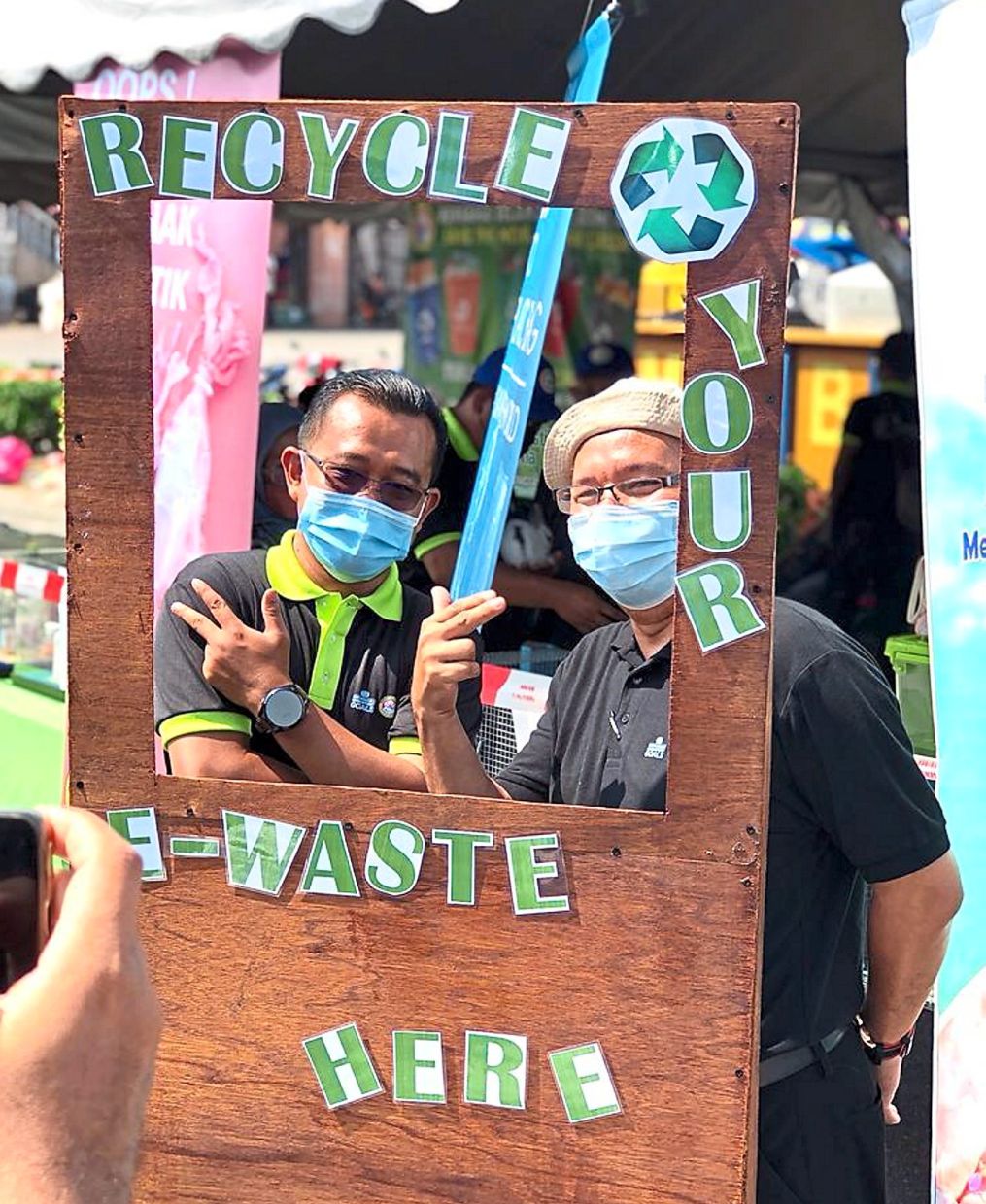 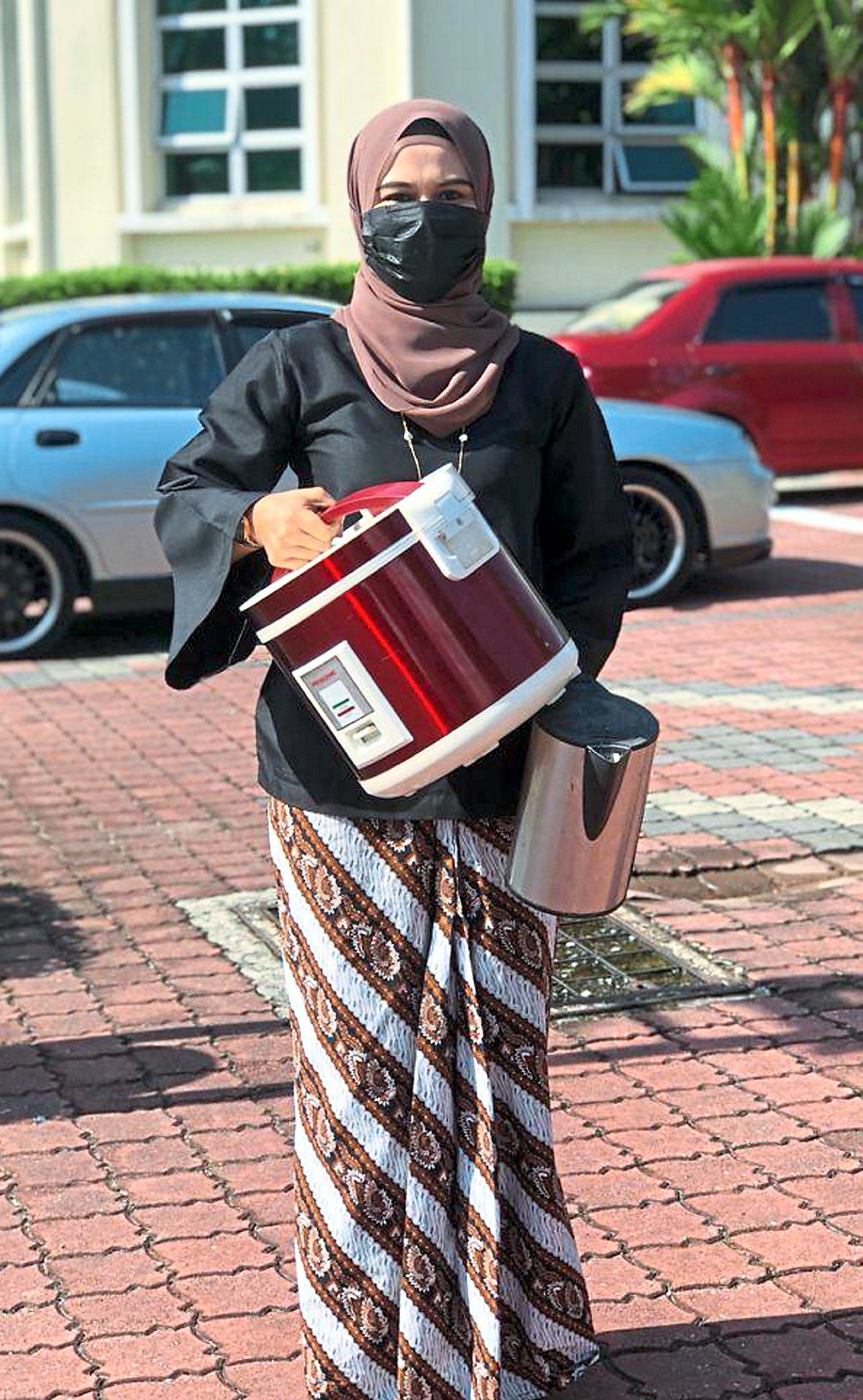 Rosli showing some of the prizes offered in two competitions organised by the Perak DOE to encourage people to recycle their e-waste this year.

Ipoh City Council staff looking at the discarded electrical and electronic items in a bin.

Charroogesinee: Social media has helped to educate the community about proper disposal methods.

Meor Razak: We have a long way to go when it comes to recycling e-waste.

Ng thinks the authorities have succeeded in increasing awareness on the issue.

Many of the local councils, such as the Batu Gajah District Council, held their own e-waste collection programmes.

A woman bringing a kettle and rice cooker to one of the councils as part of the e-waste collection campaign.