Lim (right) discussing safety matters with Insp Nor Mohd Yazid (second from left) and other police officers during a meeting at his office.

A TOTAL of 134 modern closed-circuit television (CCTV) cameras will be installed in several locations in Kepong, Kuala Lumpur, to deter criminals and petty thieves.Kepong MP Lim Lip Eng said the cameras were not a common type of CCTV device, but high-tech ones that provided 360-degree view.

“It also has 20 times zoom function that can clearly identify objects such as vehicle number plates.

“These cameras will be installed soon, hopefully by the end of this year.

“In fact, the police had also discussed with residents associations in Taman Petaling and Kepong Baru on the best spots to instal the CCTV cameras,” Lim told StarMetro.

“Insp Nor Mohd Yazid assumed his post about six months ago but our meeting was delayed because such events were not allowed during the first phase of the National Recovery Plan,” he said.

During the meeting, Lim also brought up the need for police on patrol to wear body cameras.

“Generally, the crime situation in Kepong is under control.

“There was a robbery at a goldsmith shop and some petty crime incidents, but crime is not rampant,” he added.

Lim hoped the cameras would make petty thieves think twice and would reduce crime in the constituency in the long run. 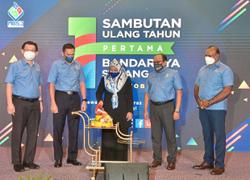