Wei Ken serving food to the children during the buka puasa event at the M Summit 191 Executive Hotel Suites in Jalan Magazine, Penang.

A TOTAL of 45 needy children were all smiles when they were treated to a buka puasa buffet at the M Summit 191 Executive Hotel Suites in Jalan Magazine, George Town.

At the event held at The Skye Event Space on the 20th floor,

Apart from the goodies, the orphanage and tahfiz school also received RM2,000 each from the hotel.

The sale of buffet dinner tickets sold over the two days contributed to the funds while the hotel topped up the rest.

Rumah Anak Kesayangan Kepala Batas head Roslina Sulaiman said it was good that the home’s 25 children got to go out during this festive season.

The ‘Jom Beriftar Sambil Beramal’ dinner was among the hotel’s charity initiatives for this year.

The hotel is part of M Summit Group, which is also a property developer. 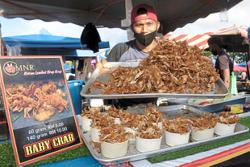