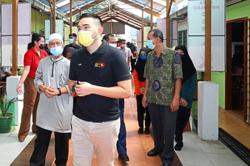 Amirudin (front row, third from left) and Hulu Selangor DO Musa Ranli with Rosmalini (second from left) and her daughter Nor Ellia Natasha Mohd Jasrizan outside Rosmalini’s new home in Taman Bunga Raya.

“I was lucky enough to get a corner unit, facing the playground, so I have some extra land and a view of the open space.

“The renovation and furnishing are also complete. This is a nice and affordable house to raise a family, ” said the 40-year-old bachelor who works as a clerk at a private firm in Damansara.

Mohd Hazwan plans to continue staying at his rented room as it is closer to his workplace, and will spend his weekends at his four-bedroom, three-bathroom home.

Bukit Beruntung resident Rosmalini Salleh is also thrilled to own her first property.

Moreover, the move to her new RSKU home will not disrupt her family’s routine.

“My four children go to schools nearby, so they won’t have to change schools or adapt to new routines when we move to our new home, although they will have to share bedrooms, ” said the 41-year-old nurse.

“My husband’s workplace is in Kepong and mine is in Sungai Buloh, so the distance to these places are manageable as well, ” she added.

Rosmalini hopes to move in by the middle of this year after carrying out renovations.

Mohd Hazwan and Rosmalini were among the RSKU homeowners who received keys to their houses from Selangor Mentri Besar Datuk Seri Amirudin Shari.

A total of 109 Type D units comprising two-storey terrace houses have been completed.

The units, which make up Phase 1A of the development have been issued Certificate of Completion and Compliance (CCC) by the Hulu Langat District Council.

The affordable housing initiative under the Selangor Housing and Property Board (LPHS) is open to qualified residents of the state.

The project in Taman Bunga Raya, Bukit Beruntung is built by MK Land Holdings Bhd through

“One of the applications under consideration is by MK Land for the construction of 10,000 RSKU units in the Sepang district.”

While there was high demand for the initiative, Amirudin said almost 60% of applications were rejected due to difficulties in getting loans approved or end-financing for the purchase of homes, hence the introduction of the Selangor Smart Sewa rent-to-own scheme.

“It’s a more sustainable scheme, rather than forcing people to buy a home when they are not financially ready, ” he elaborated.

The Selangor Smart Sewa scheme aims to help those who cannot secure end-financing by providing them houses at reasonable rental rates while helping them to save for the initial cost to own a home.

“At the same time, 829 houses will be built for the open market, bringing the total number of houses to be built to 2,214 units, ” he said, adding that the entire project was expected to be completed in seven years.

Kamarulzaman also said that MK Land was confident of Taman Bunga Raya’s potential, as it was close to facilities like shops and schools, and located near three car manufacturing centres, a hypermarket distribution warehouse and a police training centre. 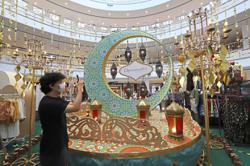