(From right) Teow, Mohd Aswaad and Chen showing the big hole along Jalan Sungai Dua in front of the Silver Jubilee Home for the Aged in Penang.

Its spokesman Mohd Aswaad Jaafar said the condition of some roads in the southwest district left much to be desired, with large potholes threatening the safety of road users.

“Recently, a motorcyclist fell off his bike while travelling on a stretch in Sungai Ara and broke his arm.

“We believe he could have lost control of his bike because of the poor road condition.

“We urge the state government to take action against those

responsible to prevent a recurrence, ” he said in a statement on Wednesday.

He believes roadworks or construction works are being carried out in those areas as ‘road barriers’ could be seen at the sites.

“The safety measures are not enough.

“Warning lights should be installed at these sites to alert road users, especially at night.

“Apparently, some of these sites may have been abandoned as there is overgrown vegetation.

“There is also a possibility that the roadworks were not completed within the scheduled time frame, ” he said.

Mohd Aswaad hoped the state government would explain to the public in detail about the construction projects carried out in those areas.

“I understand some potholes on the roads are as deep as 0.3m.

“If this problem is not addressed properly, there will definitely be accidents in the future, just like the one that happened in Sungai Ara.

“We hope the state will solve this problem as soon as possible, ” he said.

He was at Jalan Sungai Dua to point out a big hole. 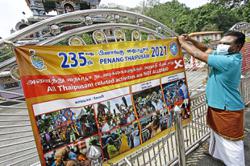