Smoke billowing out from the open burning site near Taman Panorama Rapat Indah in Ipoh.

ILLEGAL open burning near Taman Panorama Rapat Indah in Ipoh has sparked outrage among the public.

They want the authorities to take action against the culprits.

The open burning of waste reportedly started on Sunday and continued until Monday evening.

Simpang Pulai assemblyman Tan Kar Hing said the Fire and Rescue Department put out the fire on Sunday following a report from residents living near the site of the fire.

“They believed they had doused it but later found there were burning embers under the mounds of waste.

“This caused the fire to break out again on Monday, ” he said when contacted.

“Among the items burnt included construction waste, garden and household refuse, and even industrial waste, ” he said.

Tan said firemen were forced to pump water from a nearby pond to put out the fire as there was no fire hydrant nearby.

“A timely downpour also helped to contain it, ” he said.

“The area has now been cordoned off to prevent dumping of waste here, ” he said.

He noted that the open burning incident was not the first in the area.

“There have been previous fires but this latest one was bigger and more serious.

“The relevant authorities, including Perak Environment Department, must investigate and take action to stop such irresponsible acts, ” said Tan.

“We are working with the land office to trace the owner of the plot of land.

“The open burning act is an offence under Section 29A of the Environmental Quality Act 1974, which carries jail term up to five years or a maximum fine of RM500,000 or both, ” he said. 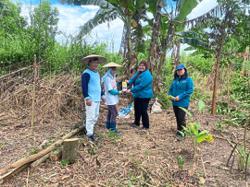