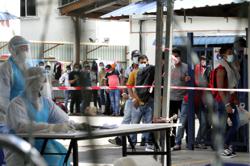 Rubbish bins have been placed beside a parking lot while the rubbish collection point at Block E, Section 2, Wangsa Maju, is being reconstructed. — Photos: SIA HONG KIAU/The Star

Wangsa Maju MCA chief Ng How Doo said DBKL had allocated RM420,000 to reconstruct all 17 existing RCPs and build another nine in the area.

“Apart from the RCPs, there are many other infrastructure upgrades and maintenance work that needs to be done.

“This is a mature housing area built over 30 years ago.

“A lack of proper maintenance over the years has caused problems such as overgrown trees, tree roots damaging roads, broken lamp posts and damaged drains.

“I hope DBKL will also look into all this, ” he said.

Section 2 Wangsa Maju Manage-ment Committee chairman Lim Cheng Hock was happy the RCPs were being replaced following their appeal to DBKL since 2016.

“The structure of the RCPs are breaking down.

“The area around them are always filthy and infested with rats.

“Some did not have a roof, causing the rubbish to get wet when it rained and resulting in a stench in the area, ” he said.

Lim added that over the years, five RCPs were burnt down in a fire and never reconstructed.

There are 103 apartment blocks in total, comprising 3,260 units.

“On average, every three blocks of about 100 units are allocated one RCP.

“With five RCPs damaged, the other RCPs were either maxed out or overflowing with rubbish, ” he said.

DBKL has appointed a contractor for the job and work to reconstruct the RCP in Block E has started. It is expected to be completed soon.

Once the RCP in Block E is completed, Lim said it would be tested.

“If there are no issues, the same design will be used in other areas. Otherwise, improvements will be made, ” he said.