SINCE indoor sports and recreation centres were allowed to resume operations last month, their operators have set up their own safety precautions in addition to government guidelines for their customers’ well-being. 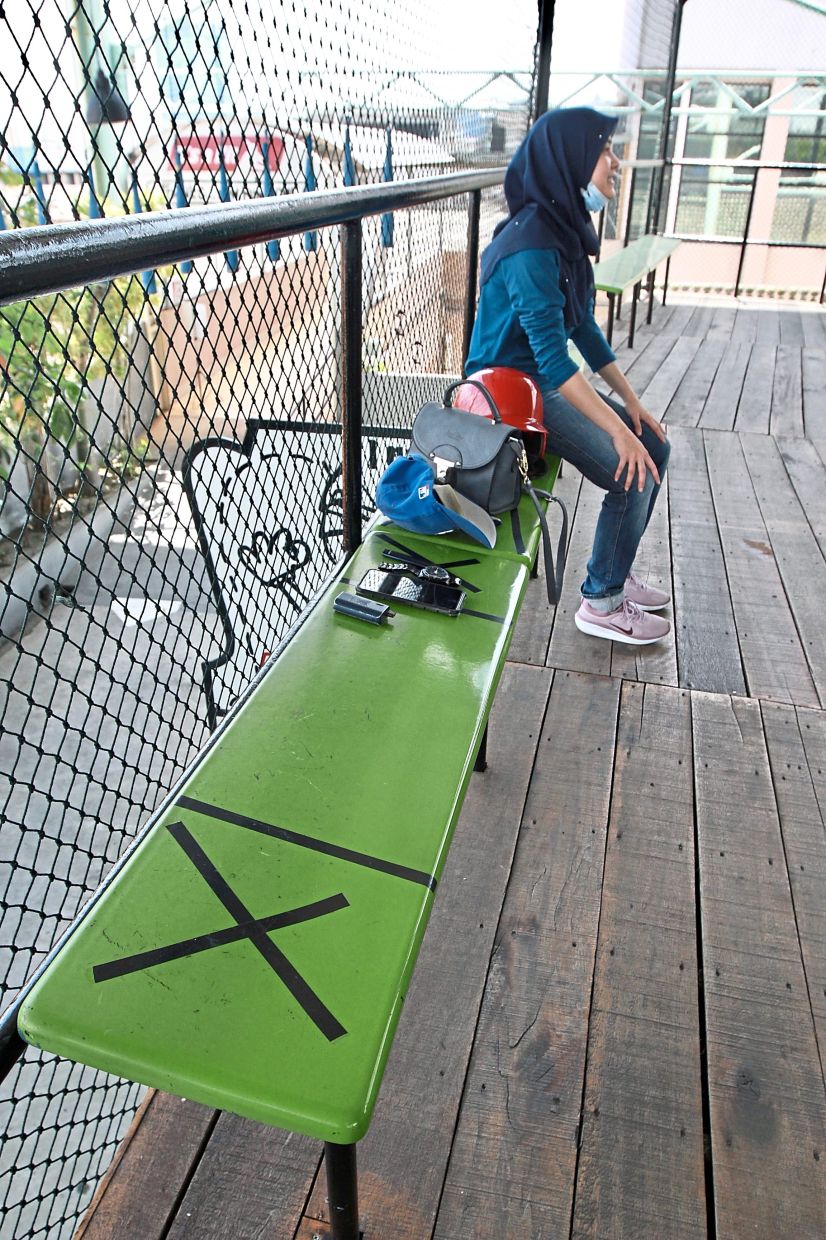 The rest bay outside the batting cage at It’s A Hit ensures customers adhere to social distancing.

While some of the initiatives are creative, others are necessary, although they can affect the customers’ experience while engaging in the activities.

But these safety procedures have been done to gain customers’ confidence in returning during the current recovery movement control order (MCO) phase, after the centres were shut for three months due to the Covid-19 pandemic.

Indoor rock climbing gym Camp5 at 1 Utama Shopping Centre in Petaling Jaya had a huge space to clean and sanitise before it reopened on June 15, especially the vertical man-made cliffs for climbing.

“We had to remove some of the ropes on the cliffs to ensure social distancing for the climbers, as this is considered dynamic sports.

“Climbers are required to maintain a distance of three to five metres between them, ” said Camp5 communications director Serene Gaik.

To reduce contact between spotters and climbers while doing bouldering, she said they limited the maximum climbing height of the boulder by removing some of the holds at the top, so climbers would not fall hard on the boulder mat.

(A spotter is someone who stands below a climber while bouldering to catch the climber if one falls, because ropes are not typically used when the climbers are close to the ground.)

The routine sanitisation at the centre include disinfecting the climbing gears, as they are rented out to customers, and fogging of the entire premises every night.

“We have come up with liquid chalk by mixing chalk and 70% cleaning alcohol, so climbers who use the chalk can also sanitise their hands at the same time.

“There are sanitiser sprays placed at various locations of the walls, which they can hook to their harnesses and spray the holds when they make their way down the wall, ” she said.

The climbing gym has also implemented an online schedule system, where visitors are encouraged to reserve a climbing spot for a two-hour session, for the operator to better manage the crowd.

Each session can be extended if there are available slots in the next session.

Gaik said the gym also offered a deferment of membership subscription period to their customers, while the membership fee remained unchanged.

“It is a difficult time for the gym as we have to cancel two big competitions due to Covid-19.

“Several school programmes for children were also postponed, ” she added.

At It’s a Hit rooftop baseball pitch, also in 1 Utama, operational procedures regarding rented equipment have been revised to reduce customer contact as a safety measure.

“The game used to be played using tokens or time-play session, but now we only allow time-play to reduce contact points, ” said founder Tim Freebairn.

It’s a Hit requires customers to wear nitrile (synthetic rubber) gloves while batting and they only allow three customers in a cage. Climbers can hook sanitisers to their harnesses and spray the holds when they make their way down the wall at Camp5.

“Social distancing comes naturally between batters who will be inside the cage while only two people are allowed to rest behind the net.

“We have also invested in an online transaction system to reduce contact points that happen when using cash to pay, and customers are encouraged to pre-book their sessions, ” he said.

He added that rented bats and helmets were sanitised after every use, and the outlet utilised UV lights to disinfect the equipment.

The rooftop baseball pitch reopened on May 22 and customers had gradually returned.

Freebairn said it was easy to implement social distancing on the premises because there was ample space for batters.

The place is equipped with baseball and softball pitches. 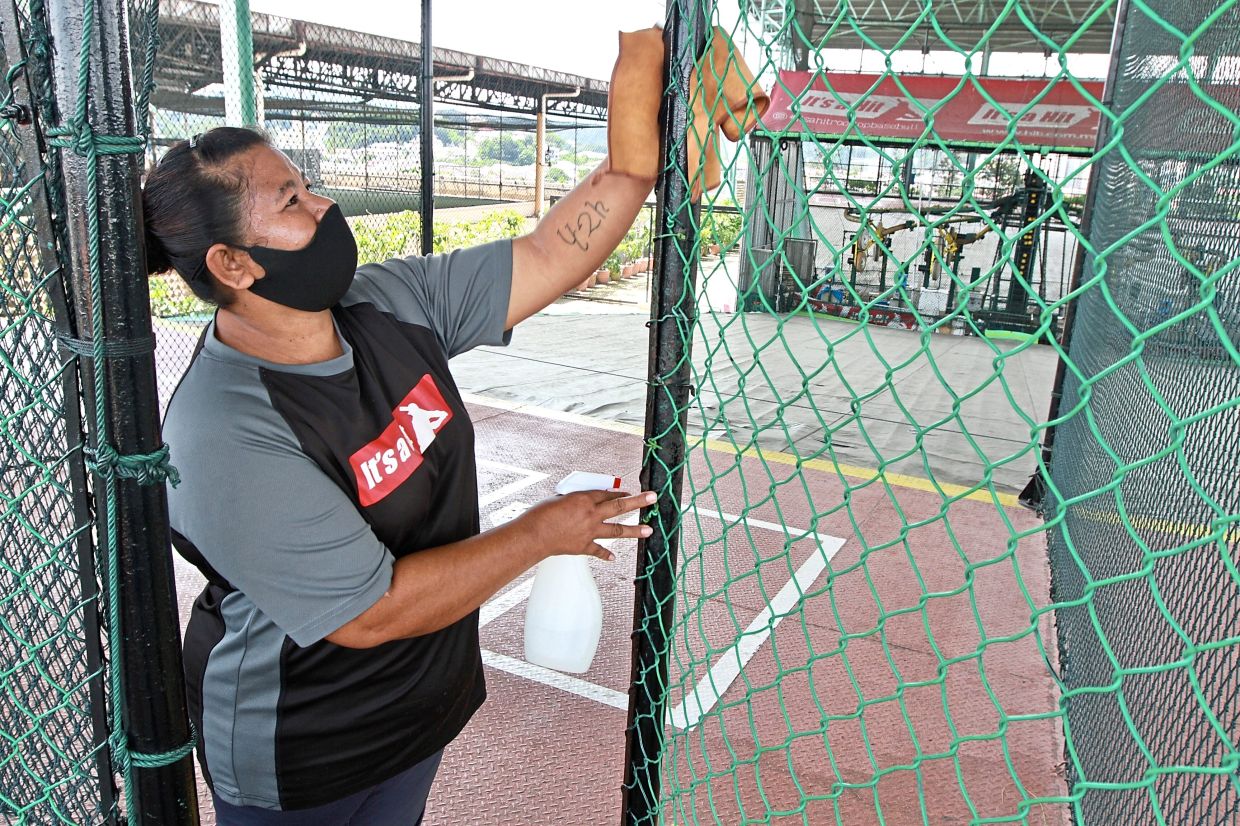 A worker sanitising the premises at It’s a Hit rooftop baseball pitch in Petaling Jaya.

At Stars Archery in Sunway Pyramid, Bandar Sunway in Petaling Jaya, customers need to have an extra layer of

Its senior sales and marketing executive Jason Khor said customers were given a plastic cover and gloves to wear on their arms before putting on the arm guard and bow.

“The people need to feel confident. We take care of their safety.

“The plastic cover is optional, and we sanitise our equipment regularly, ” he said. 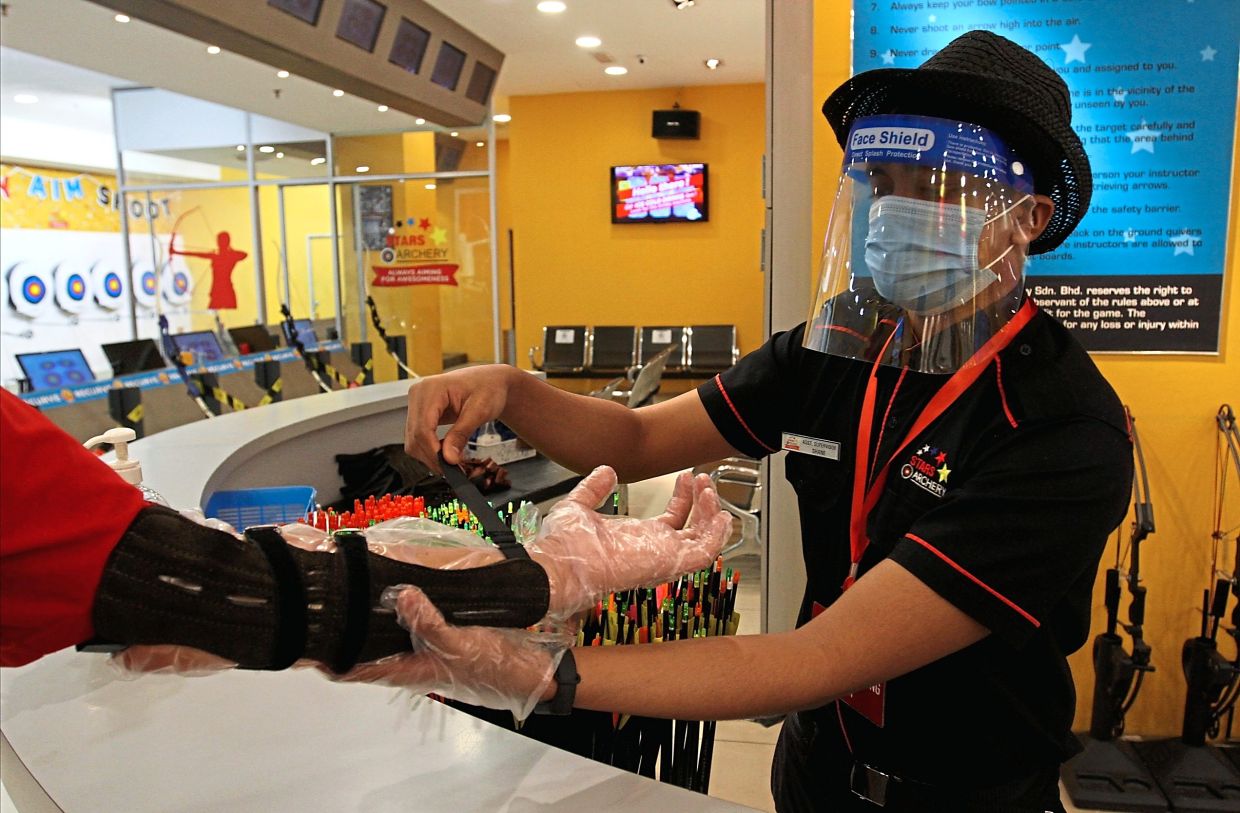 Customers have to wear an arm guard and finger gloves at Stars Archery.

Staff were seen wearing face masks and face shields while guiding first-timers on how to shoot an arrow.

Stars Archery has closed off alternate lanes at the shooting range to ensure social distancing between archers.

Gripping the bow with a plastic- covered hand might be slippery at first, but Khor said it was necessary.

The archery centre had specially ordered a sanitising machine to disinfect every finger glove and arm guard.

“It has been a difficult time for us. To attract more customers, we started offering free shooting trials when we reopened on June 15, and partnered with other outlets to offer better packages to customers.

“Sunway Pyramid has been very supportive of us in helping with the promotions, ” he added. 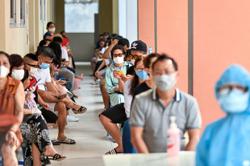