WHILE many of her peers are quite content pottering about the garden, Tunku Ellie Badariah Tunku Ahmad – one of the pioneers of Malaysian women’s football – shows no signs of slowing down and is most animated when talking about the football club she plans to set up for Negri Sembilan-born girls.

The sprightly 76-year old, whose list of sporting credentials include being elected the Asian Ladies Football Confederation assistant general secretary in 1974 and playing a pivotal role in the establishment of the Negri Sembilan Women’s Football Association (NSWFA) when she was just a schoolgirl of 15, is all fired up when the conversation turns to football.

“I’ve already got a team together and I’m just waiting to register the club, which will be called Daro Football Club.

“It will be open to Negri-born girls and women aged between seven and 30, ” she said.

She said “Daro” referred to girls and young women in the Negri dialect.

With a twinkle in her eye, the septuagenarian fondly recollects how her lifelong passion for the beautiful game was fostered at a young age.

“After school, I used to play football with my friends at a padang near my house. “It was during one of those games that I was approached by former state assemblyman and Negri Sembilan Indian Association president M. Muthucumaru, asking if I could form an all-women football team, ” she said.

After getting her family’s blessings, Tunku Ellie jumped at the opportunity.

The NSWFA team was founded in 1959 with Muthucumaru as president and Tunku Ellie as captain.

She was among the youngest players on the team that also included Muthucumaru’s daughter Kanagavalli, schoolgirls, nurses, and telephone operators.

At the time, women’s football was quite a novelty, and the match attracted some 8,000 spectators eager to be part of the action.

The Selangor team triumphed, winning the game with a 1-0

score, and a return match was held later the same year at Merdeka Stadium.

Over 15,000 people attended the return match, which this time was won 1-0 by the NSWFA, with Tunku Ellie scoring the goal.

Tunku Ellie remembers the excitement of scoring the winning goal for her home state.

“I was a striker and donned jersey No. 9. Victory was sweet, especially since it was our first time playing in Merdeka Stadium and with such a huge crowd, ” she said. Tunku Ellie (standing, fourth from left) at a dinner for the Negri and Selangor women’s football teams hosted by Muthucumaru (seated, second from left) after their inaugural match in January 1961.

As the years went by and women’s football in the country began to gather steam, the NSWFA went on to play many more matches and invitationals, including against teams from Indonesia, Australia and Hong Kong.

Tunku Ellie, who also played for LFAM (1972-77), served as LFAM vice-president and team manager from 1997 until 2008, and accompanied the national women’s side at the SEA Games, Asean Football Federation (AFF) Women’s Championship and Asian Games during her tenure.

In 1998, Tunku Ellie was bestowed the Kesatria Setia Diraja (KSD) award – a federal honour – for her contributions towards the advancement of women’s football by then Yang di-Pertuan Agong Tuanku Jaafar Tuanku Abdul Rahman.

While her glory days on the pitch may be behind her, the former Convent Seremban student is far from retired.

Her days are now spent working out the details for the club she has always dreamed of setting up.

“We have already designed the crest for the club.

“The club would have been registered by now, if not for the restriction order due to Covid-19, ” she said.

Despite the slight delay, Tunku Ellie is hopeful that the Daro Football Club will take off soon.

“It is time we have a club with our own girls – no imports.

“There’s plenty of talent right here, ” she said, adding that in her free time, she still enjoyed kicking a ball around with her teenage grandnephews and grandniece. 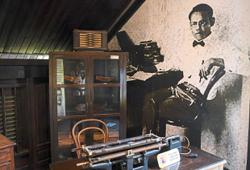