AMID the joy of giving free drinks and food to the faithful, some of the thaneer panthal (refreshments) stall of Thaipusam in Penang were also about friendship.

Most of the stalls were set up by companies and non-governmental organisations (NGOs) but a few were by ex-employees of defunct companies such as Fairchild Semiconductor and Tongkah.

“We treat this as our chance to get back together and share a good deed, ” said ex-Tongkah employee S. Manugar.

He said some of them were friends and colleagues for 25 years in the factory that was once in Juru.

Although the company was long gone, they still share the bond and feel their link as ex-employees of the company.

“About 10 of us collected about RM15,000 to create this thaneer panthal stall.

“We served nasi lemak, nasi tomato, vegetarian mutton curry and various traditional Indian snacks plus a free flow of drinks to all the devotees and visitors to the festival, ” he said.

Besides the over 200 refreshment stalls showing the generosity that has been a long Thaipusam tradition, another old attraction is the presence of five fortune tellers offering parrot astrology.

This is a type of astrology popular among the Tamils in Tamil Nadu and used to be seen in many Malaysian Indian town centres.

In parrot astrology, a trained parakeet in a cage steps out and, out of a spread of 27 cards, picks one out for people seeking to have their fortunes told.

The cards each bear the image of one of the gods of the Hindu pantheon and the fortune teller will decipher the fortunes of people based on the deity chosen by the parakeet.

In his speech, Deputy Chief Minister II Dr P. Ramasamy, who is also Penang Hindu Endowment Board (PHEB) chairman, said he was glad that the celebration went on peacefully and smoothly.

“We started with a small golden chariot in 2017 and this year, we have a proper chariot of our own, ” he said.

Ramasamy said donations collected from the golden chariot would be in aid of poor Indian students and the less fortunate.

“We have been committed to the same cause for the last four years.

“The public donations collected will go back to the public.

“Our account is properly audited and has been presented in Parliament every year.

“We are open, transparent and accountable.

“Scholarships and financial aid for tertiary education amounting to nearly RM350,000 were given out last year and we will continue to do that, ” he said.

Ramasamy said the PHEB was grateful for the RM1.5mil allocation from the state government and RM700,000 from the Finance Ministry this year.

“Thaipusam is one of the major state events in Penang.

“What started off as a small shrine, the Waterfall Hilltop Temple is now the largest Lord Murugan temple outside India.

“We will be carrying upgrading works at the temple so that devotees can continue to perform their prayers in a conducive atmosphere here.

“We will commence work later this year to build a community hall for religious and cultural events and also to carry out free tuition classes, ” he said.

“The state government has always paid attention to the needs of the Indian community in Penang.

“The state has also increased funding to RM2mil from RM1.75mil annually to Tamil schools.

“The allocations for kindergartens in Tamil schools were increased from RM100,000 to RM150,000.

Chow also announced that the state government had allocated RM200,000 to the Arulmigu Balathandayuthapani Devasthanam Temple, otherwise known as the ‘Waterfall Hilltop Temple’ for the Thaipusam 2020 celebration.

Through the app, devotees are able to access information on the temple religious programmes, make donations to the temple online, register themselves for events, poojas and hall bookings instantly.

The fibre-made stall is said to be the first-of-its-kind in Malaysia. 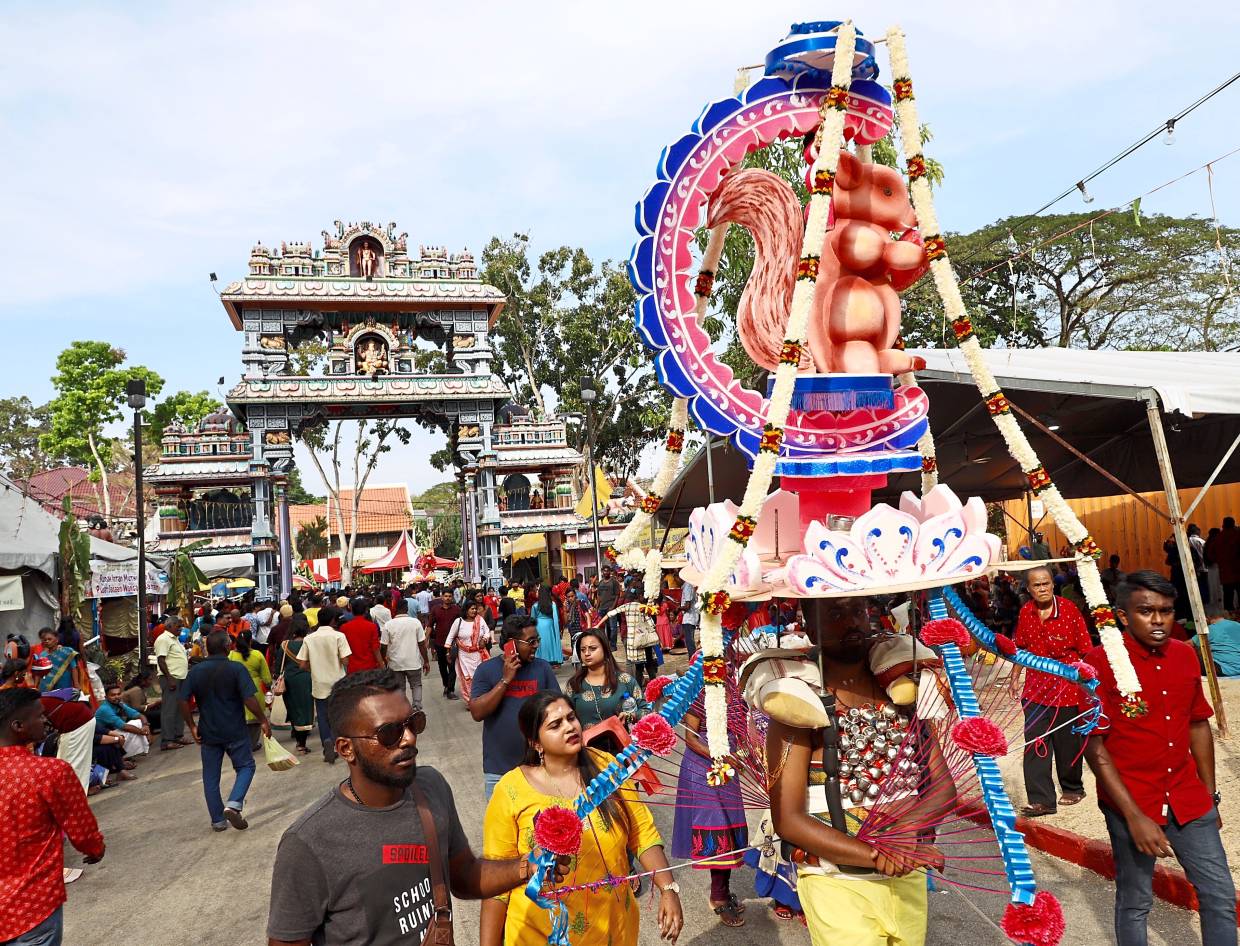 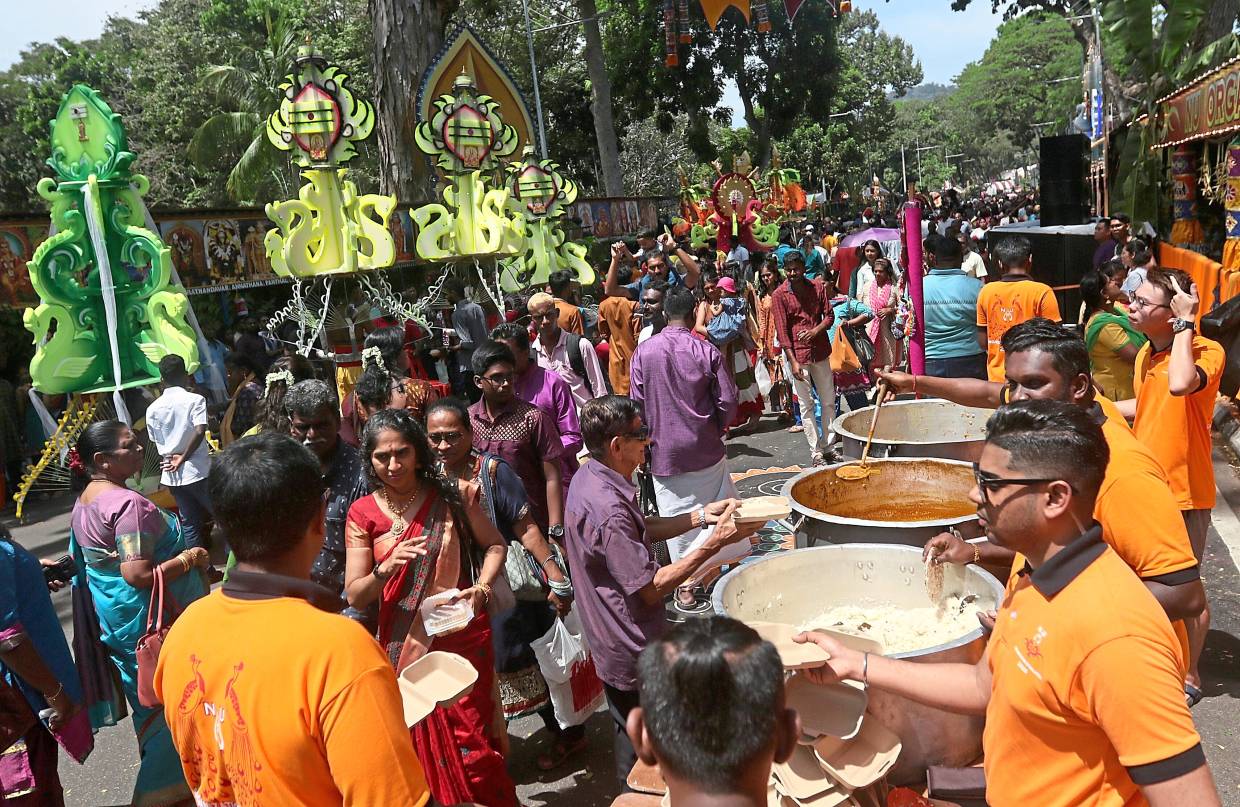 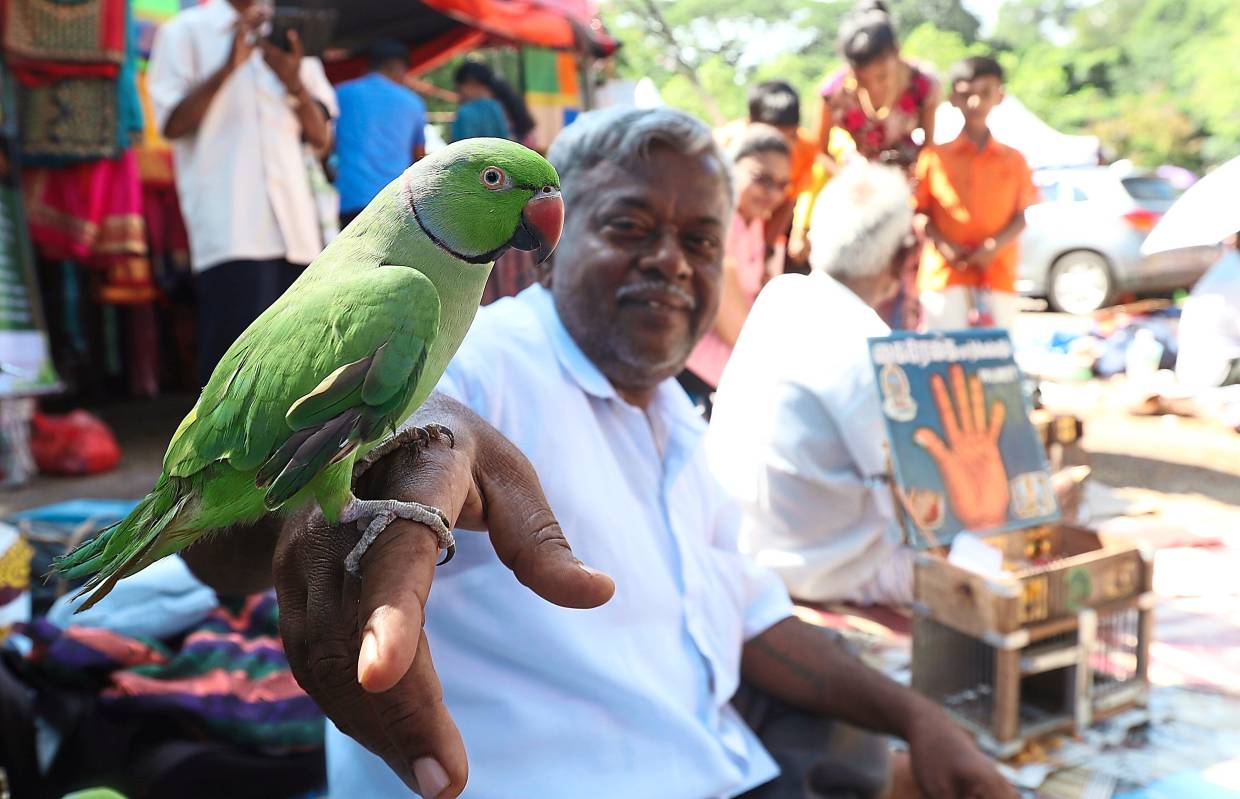 Helpers assisting kavadi-carriers as they make their way along Jalan Utama to the temple to fulfil their vows.

A view of the big crowd along Jalan Utama during Thaipusam.

A devotee carrying a decorated pole across his shoulders during the Thaipusam celebration.

One of the fortune tellers with his green parakeet.