SUSTAINABILITY is the buzz word these days not only with regard to the environment but within social enterprises too as they focus on generating employment and supporting marginalised communities.

This multiprong approach has garnered a lot of support from multinational companies and their corporate social responsibility arms, with the aim to create an ecosystem to drive their respective social missions.

In March last year, The Star quoted British Council as saying there were over 20,000 social enterprises in Malaysia, where most of them are striving towards achieving the 17 Sustainable Development Goals set by the United Nations.

Sowing the seeds of empowerment

At the Kechara Soup Kitchen food distribution centre in the heart of Kuala Lumpur, piles of old linen which will be turned into bags and rugs are stacked in one corner of its operations director Justin Cheah’s office.

“It was in 2017 when we realised we needed to do something about people dropping off unwanted clothes, and we found those a waste to throw away.

“So we had to look at the recipients in our food bank community who are mainly single mothers or housewives living in the People’s Housing Project (PPR) flats, who needed extra income to support their families, ” said Cheah.

Kechara’s solution is to have an empowerment programme to help the disadvantaged women, who are also wives whose husbands are low-income earners, build a sustainable livelihood.

Volunteers from Kechara then delivered the unwanted linens to the respective homes for the women to turn them into something useful to make some money.

Cheah said his volunteers had to first ensure the womenfolk were inclined to sew and be involved in the programme.

And there was another problem — the women did not have the network to sell the upcycled items on their own.

“As soon as they finished making the products and passed our quality control, we would buy the products from them and then sell these items at our monthly bazaars, ” said Cheah.

He said that before his team gave the women sewing machines, the latter started with weaving rugs and mats out of worn T-shirts.

Outside of Kuala Lumpur and Penang, Kechara’s other base for the Empowerment project is in Taman Molek, Johor Baru, and that was when Doubletree by Hilton Johor Baru came in to collaborate with the “Linens for Life” programme.

The aim was to help local communities through the upcycling of used hotel linens with three-fold objectives — aiding immediate disaster relief efforts, providing livelihoods to the local community through recycling and helping hotels reduce waste.

Cheah said future plans included creating an online platform to help the women sell the upcycled goods on their own.

On a Saturday morning at the Sesapan Batu Rembau community hall in Beranang within the Hulu Langat district, 10 women all under the B40 group are learning how to make soap from used cooking oil.

Leading the group through the soap-making process was housewife Nor Kartini Abd Wahab, 49, from Beranang.

“This is an amazing experience for us, because we get to gain knowledge, learn new skills and help our community earn extra income.

“We thank Pelita, the MP’s office and UKM for this collaboration as it is exciting to attend these workshops, ” said Nor Kartini.

This project of upcycling used cooking oil started last year when the pharmacy students had to fulfil their elective project focusing on the environment and sustainability.

Through social media networking, they managed to collect 100kg of used cooking oil via public engagement, including hotels and eateries, and they sought help from Pelita to encourage housewives from the B40 group to learn new skills.

In June 2018, the first group of housewives managed to sell the first batch of dishwashing soap made from used cooking oil at the local markets in Semenyih.

“They enjoy learning the process and it builds their confidence to generate their own income, although not much, which they get doing online and offline sales, ” said UKM Faculty of Pharmacy assistant dean of entrepreneurship and creativity, Dr Nor Syafinaz Yaakob.

Pelita chairman Rawiyiah Zakaria had said that the first batch of participants went through trial and error making dishwashing liquid, but they managed to refine it and in the end, it was a sellable product.

It is just another weekday at Me.reka, a social enterprise located in Publika, Kuala Lumpur that prides itself as an alternative education space, and it is a hive of activity as about 40 pupils from an under-served school in Lumut, Perak, are there to make things from scratch using waste wood and cloths.

“If someone wants to help and educate a particular community, we can teach them and collaborate, ” said Me.reka’s head of education Jey Bala.

“Mereka” in Malay means either “to create” or “them”.

This particular collaboration was between Me.reka, Pintar Foundation and Tesco Malaysia, where both have their own school adoption programmes targeting those from the B40 group.

The pupils aged 11 and 12 were from SK Dato’ Ishak, Lumut and they learned to make upcycled cloth pouches and a multipurpose holder from recycled wood.

“We realise the job climate will change, which is why our exploration programmes for schools highlight careers of the future and honing 21st century skills, ” Jey explained.

Me.reka is fully equipped with a wood and metal workshop,

provide exposure and opportunity to the needy schools.

“Their teachers are also exposed to these workshops, where they can return to the school and use different methods to teach their pupils.

“They do not have the resources and support like urban schools, ” she said.

Materials such as wood and textiles are donated by the public to Me.reka.

Jey said their lab working spaces were open to the public and the organisation could customise each programme to suit the target group.

The school’s teacher, Norliza Che Omar, found the workshops exciting and interesting as it allowed the pupils to explore new experiences.

“Having the children at Me.Reka is important as it empowers our next generation in technology, engineering, science and mathematics. 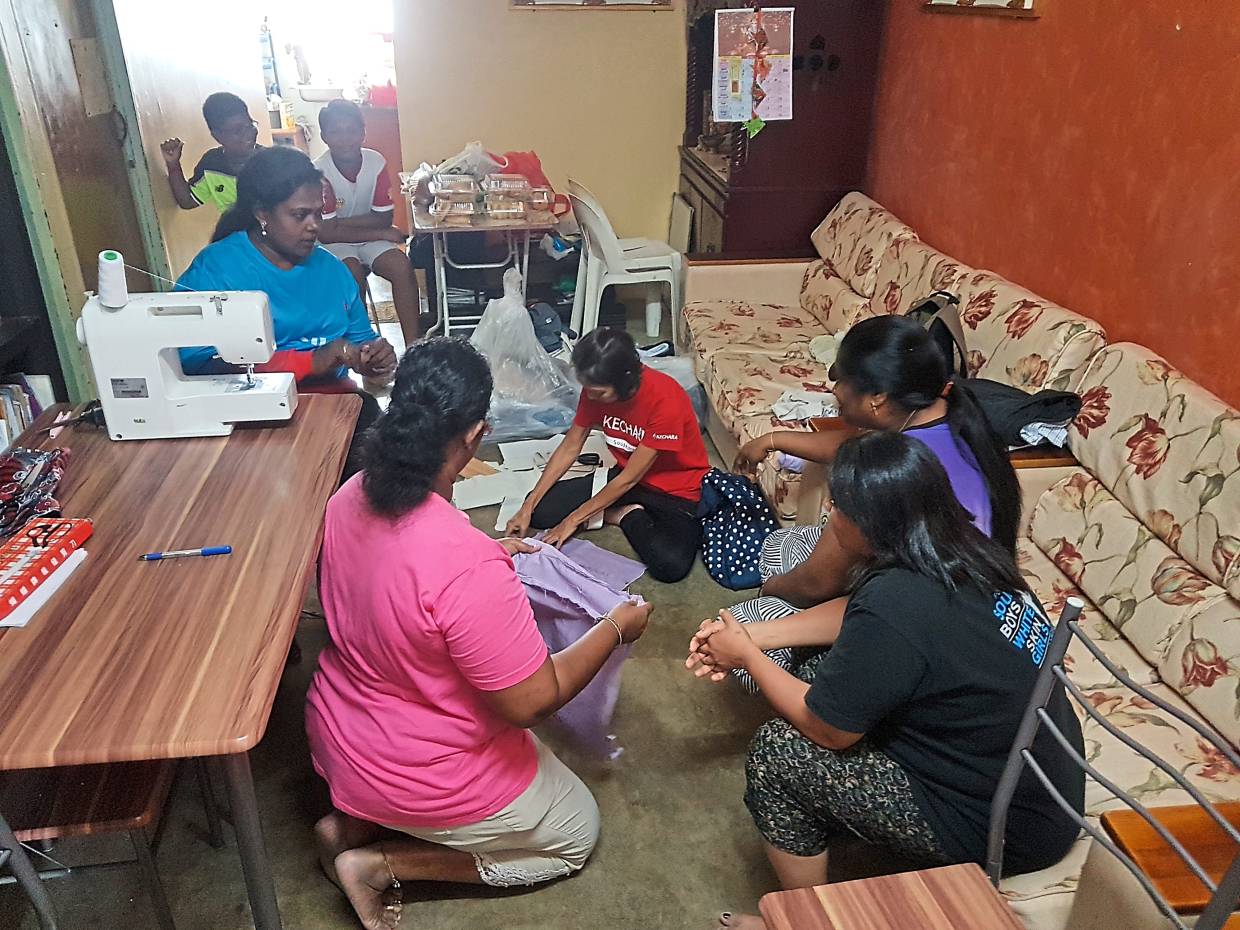 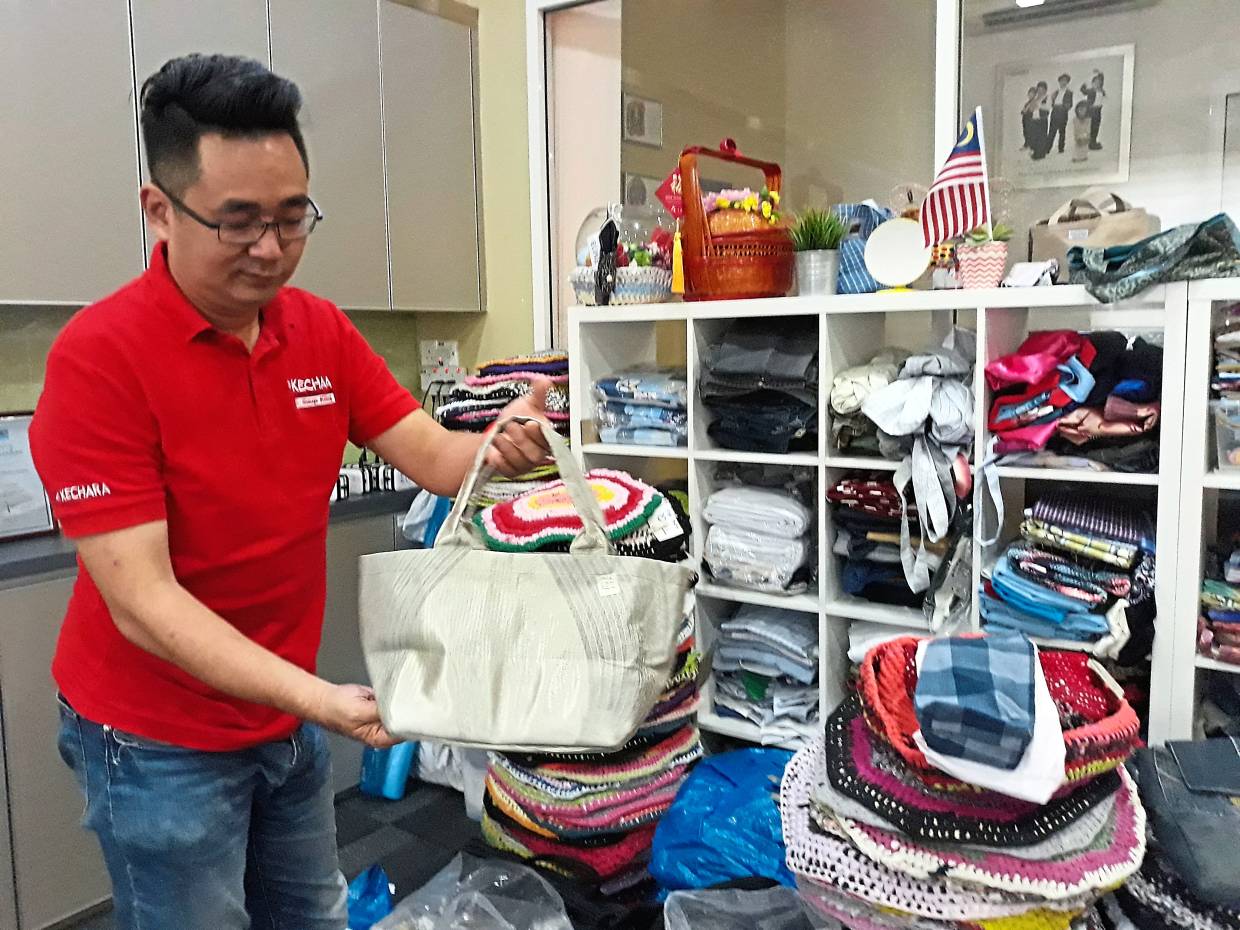 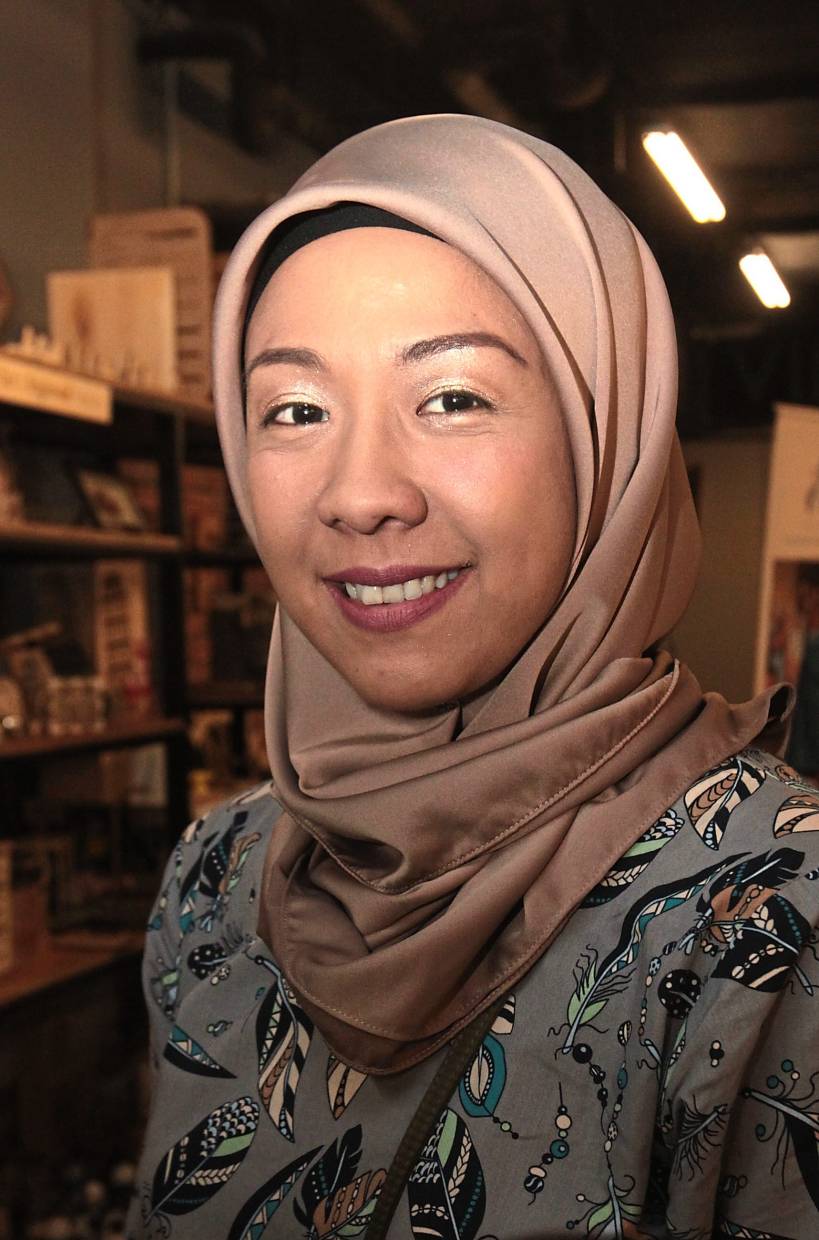 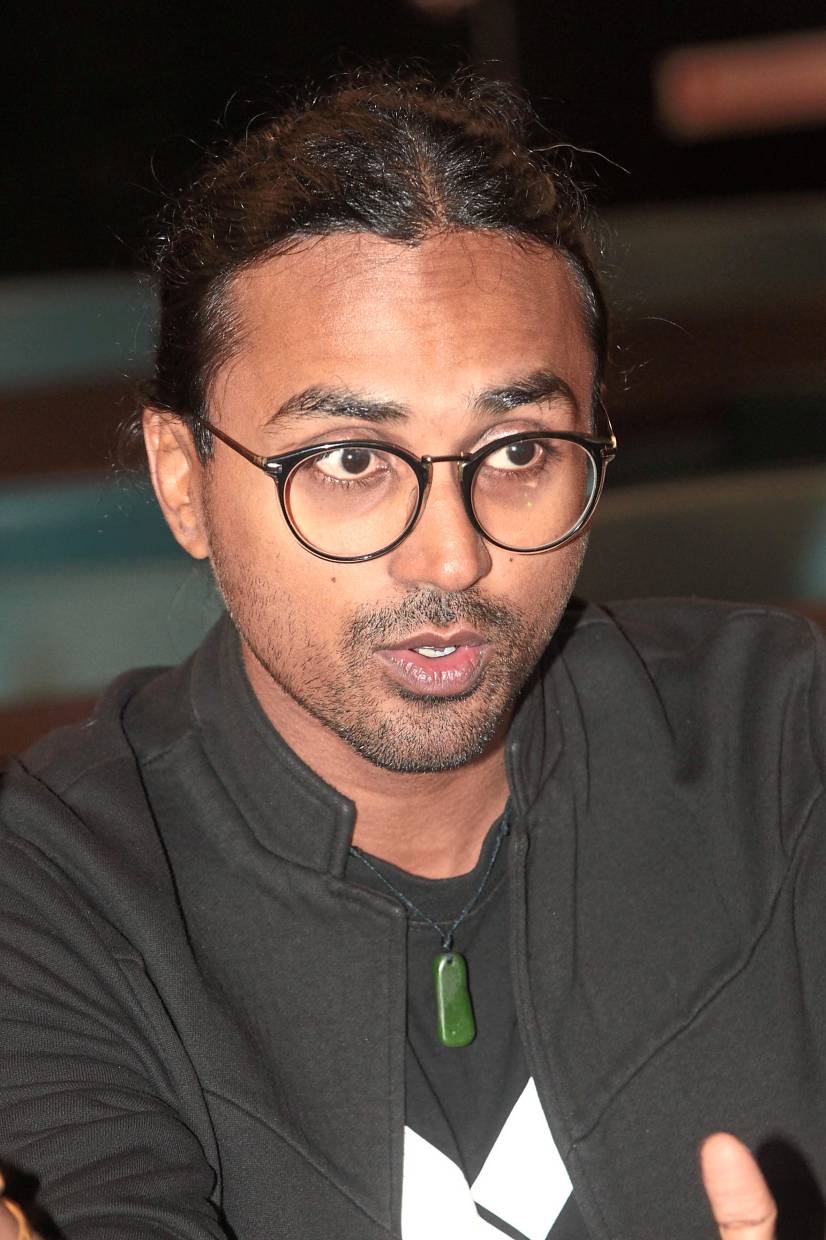 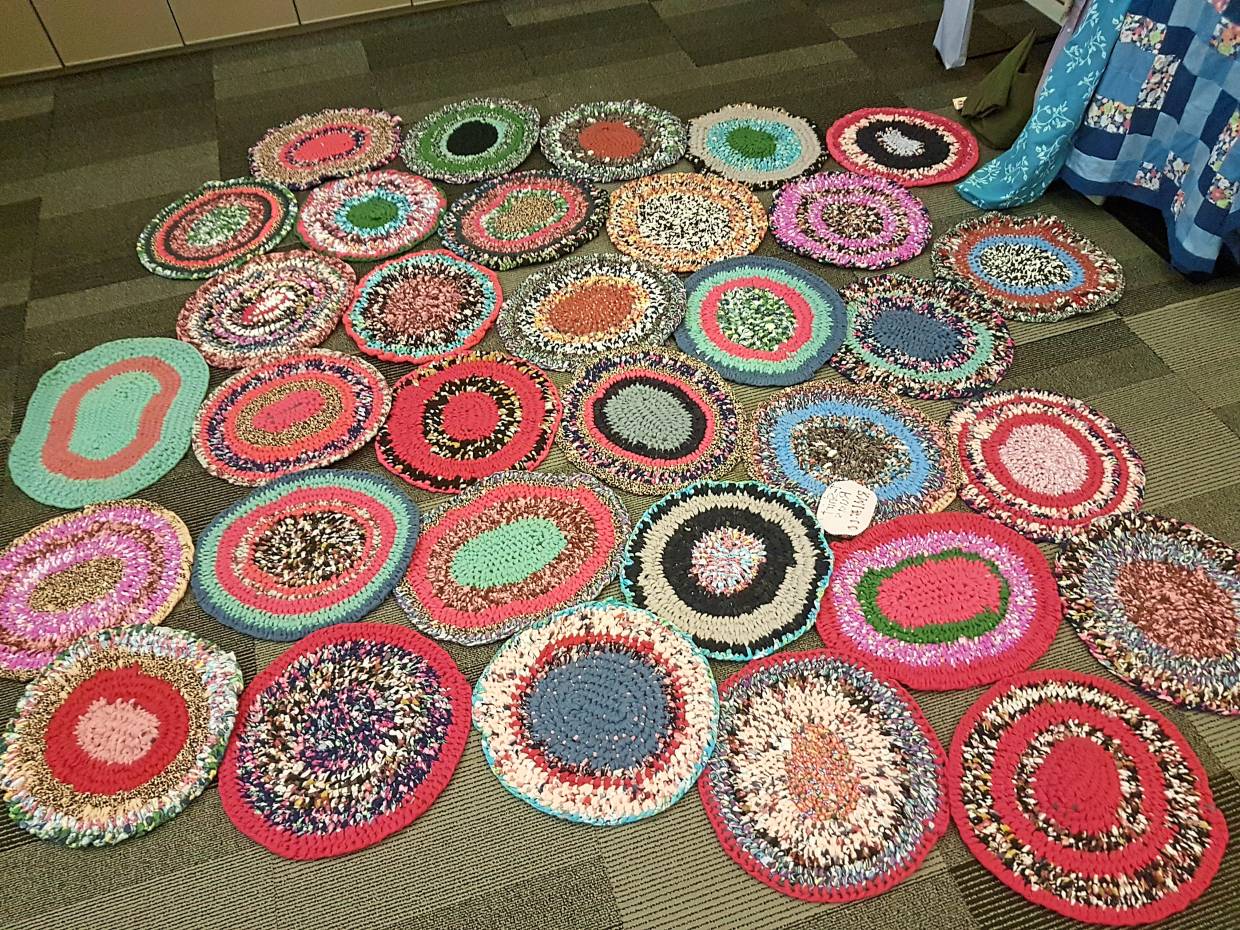 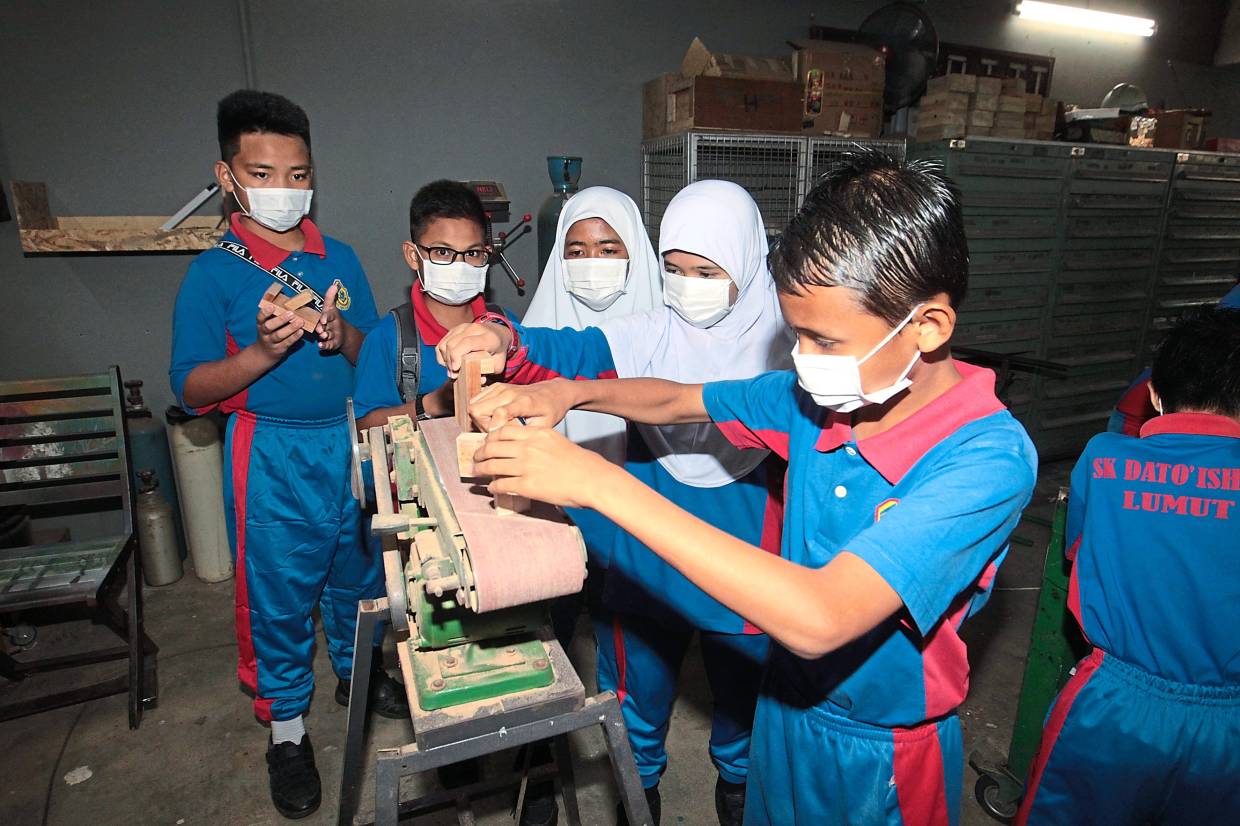 Cheah showing the bags made from used linen by housewives from the B40 group at the Kechara centre in Kuala Lumpur.

Floor rugs made out of cotton T-shirts by housewives under the Kechara Empowerment programme. — Photo courtesy of Kechara Soup Kitchen

Soap mixture made from used cooking oil and pandan leaves are poured into moulds.