A lorry caught dumping rubbish on a plot of privately owned land.

SINCE the Solid Waste Management and Public Cleansing Act 2007 (Act 672) came into force in 2011, a total of 33 private companies and 37 individuals have been prosecuted for illegal dumping in seven Malaysian states to-date.

Solid Waste Management and Public Cleanliness Corporation (SWCorp) is the regulator of waste in these states.

The first case taken to court was in 2014, where a family-owned construction firm in Tampin, Negri Sembilan was charged for illegal dumping of waste under Section 71 (1) of the Act.

In Kuala Lumpur, 19 illegal dumping cases were brought to book.

No case has ever been prosecuted in Putrajaya but one case is currently being investigated.

Collectively RM201,000 in fines have been imposed on those caught dumping waste illegally.

However, surprisingly no one has ever been penalised for the maximum amount of RM100,000.

The highest fine imposed so far was in a case in Sungai Petani, Kedah where the culprits were ordered to pay RM30,000, while the highest fine in Kuala Lumpur was only RM17,000. “In Kuala Lumpur, sad to say, most offenders get away with just a slap on the wrist, ’’ said SWCorp Federal Territories director Mohd Zahir Shaari.

“Last year alone, we had four illegal dumping cases in Kuala Lumpur and each offender was slapped with the minimum RM10,000 fine.

“It is disappointing, considering the work it takes to catch the culprits in the act and book them, confiscate the vehicles and the paperwork that goes into preparing the investigating paper.

“So after all that effort, to see them (accused) get off so easily can be demoralising to my team, ” he said.

He said his entire team would be present in court during sentencing but they were often left disheartened when environment polluters were let off easily.

“My team works hard to catch these guys but the justice system needs to do its part as well, ’’ he said.

Illegal dumping of waste, be it industrial, chemical, construction or household waste poses a big problem to the environment.

The problem is especially critical when waste is dumped near water bodies, drains and jungles where contamination is likely to happen. Those dumping rubbish illegally are now doing so in remote jungle areas.

“Imposing the maximum penalty of RM100,000 is, personally to me, a very small price to pay for trying to destroy the environment.

“However, the courts do not seem to think so as each time the sentence meted out is only the minimum RM10,000 fine, ’’ Mohd Zahir noted.

“We need to send a stern message that any form of environment pollution is unacceptable and the perpetrators must be held accountable.’’

He said if Malaysia was strict with environmental polluters, there would be less incidences of illegal dumping in the country.

“We recently caught a man dumping waste right in the middle of SUKE Highway. After investigating, we found out that he was contracted to dispose of the rubbish in a landfill but chose to dump it on the highway to avoid paying the tipping charges, ” he added.

Tipping charge is a fee paid for disposing waste at a landfill.

The fee helps the landfill operator carry out maintenance and pay for operational costs. For the disposal of construction waste from Kuala Lumpur, it costs about RM30 per lorry and waste is usually disposed of at the Sungai Kertas landfill.Tipping fees are RM49 at Bukit Tagar, RM48 at Taman Beringin in Jinjang and RM30 at Sungai Kertas in Selayang. SWCorp is an agency established on June 1,2008 under Housing and Local Government Ministry and is governed by the Solid Waste and Public Cleansing Management Act 2007 (Act 672).

However the agency only started enforcing the Act on Sept 1,2011 and the enforcement against illegal dumping only started in 2014.

“Prior to that, local authorities like DBKL (Kuala Lumpur City Hall) did the enforcement against illegal dumping, ” said Mohd Zahir.

Illegal dumping of waste is still a big problem everywhere. Local authorities have been grappling with the issue for decades.

The rampant dumping of hazardous waste is making the situation more dangerous and the culprits are no longer limited to the unlicensed contractors but licensed ones too.

Mohd Zahir said the act of illegal dumping was so frequent 10 years ago and in some cases, the culprits were brazenly doing so openly.

“But once we started regulating, it became a cat-and-mouse game with the perpetrators, ” he said. An enforcement officer getting photographic and video evidence of culprits dumping waste illegally in Kepong.

“They continue to dump waste illegally, but now they do it secretly, in the wee hours of the morning and they choose remote areas on private lands and in jungles.

“These past few years we have quite successfully managed to map out their activities and identify hotspots where the culprits are most likely to dump waste.”

He explained that there were two types of illegal dumping.

The first is run by an operator who uses people’s land to dump waste.

“Most likely, the operator pays a certain fee to the landowner, ” he said.

“This is illegal because one needs a permit and licence from the authorities to dispose rubbish.

“The second is where unsuspecting landowners have no idea that their land is being used as a place to dump waste, and there are plenty of such cases in Kuala Lumpur.” 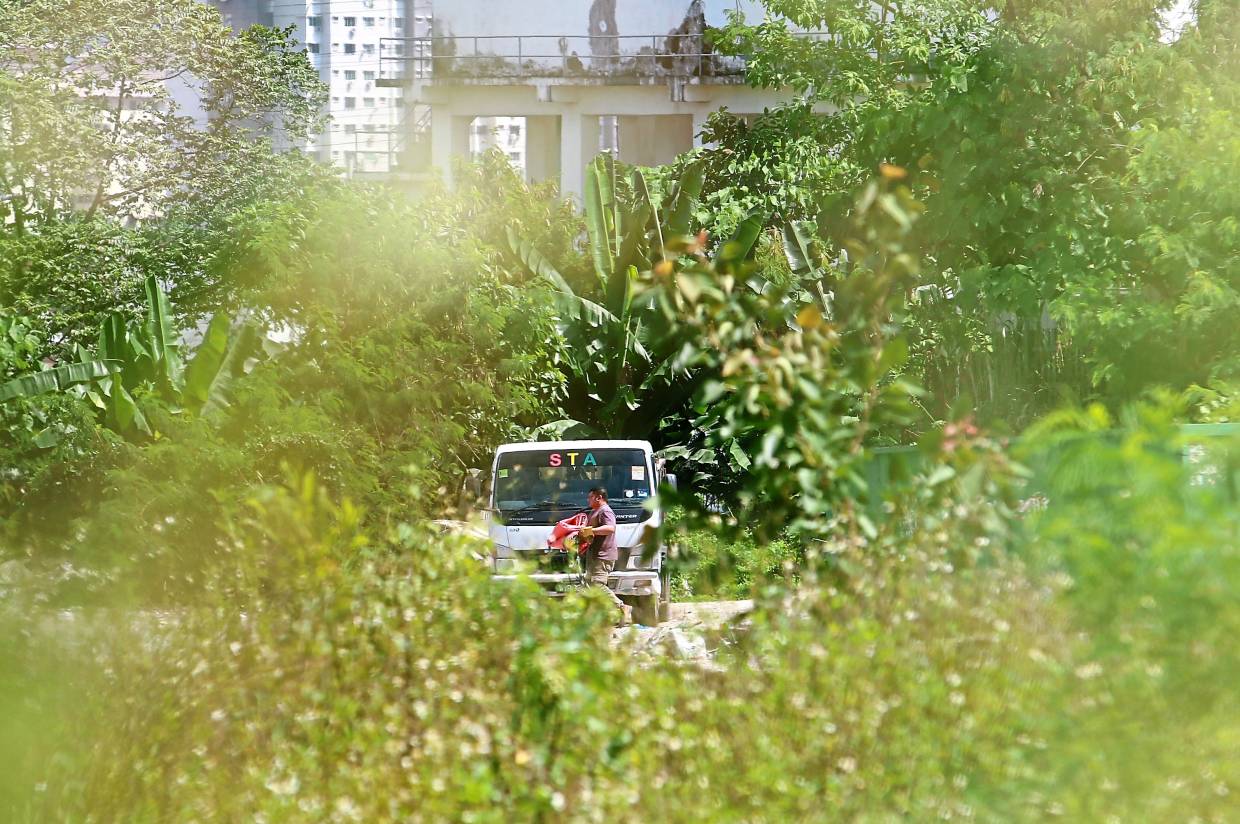 A man spotted dumping rubbish on a private land.

Mohd Zahir elaborated that on some land, the owner or a contractor were only allowed to place sand there for construction purposes, but small-time waste collection operators who offer their services to hotels and contractors often abuse the specified given permission by turning the site into a dumping ground for all types of rubbish.

He added that after mapping out the areas of illegal dumping, the enforcement team was able to identify the hotspots which included industrial sites, graveyards, empty lands and remote highways and jungles.

“My men have found mountains of decaying rubbish dumped inside remote jungles where it is not easy to get to.

“We do not know how long the rubbish has been there but we know the perpetrators will eventually return to the site and my men will be waiting for them, ’’ he said.

Covert team goes to the ground to catch environment polluters