Mayor aims to leave no one behind

Nor Hisham checking out a tactile pathway installed in Brickfields. — Filepic

KUALA LUMPUR is a fast-growing metropolis. It spans 243sq km and has some 1.9 million people who make their home here.

During the day, the city’s population balloons to four million when people from outside the city travel in for work.

Planning ahead for a city with that population size is no easy task, and the man in charge of that has a dream he wants realised for the city.

A man of vision, Kuala Lumpur mayor Datuk Nor Hisham Ahmad Dahlan wants to make the city inclusive for all.

With the tagline “No One Left Behind, ” he wants the Kuala Lumpur City Plan 2040 (KLCP2040) to consider everyone, including minorities, elderly and the disabled.

More affordable housing, efficient public transportation and better hawker management and drainage systems are some of his objectives.

“For the next 20 years, we will focus on improving the life quality of city folk.

“We want a smart city that is low carbon, with smart residents.

“Kuala Lumpur City Hall (DBKL) has a responsibility to provide and maintain public facilities to ensure the comfort of residents, ” he said.

Nor Hisham said the current ratio of public transport usage to personal vehicles was still low compared to the target in 2020, which was set at 60:40.

“The current ratio is 20:80, which meant more needed to be done to encourage public transport usage.

“We will also look into decreasing parking bays in the city as a way to encourage people to use public transport, ” he said.

Already some efforts have been made towards this goal.

Multi-storey parking bays in Taman Mulia and Seri Kota Public Housing Project (PPR) in Bandar Tun Razak were built near an LRT station to encourage commuters to use the train.

“We are also looking into the idea of closing certain roads in the city on certain days of the month, ” said the mayor.

The free bus service GOKL, which caters to high-density residential areas, has also been expanded to cover seven routes in total now.

Elaborating on the need for better hawker management, Nor Hisham believes greater focus on education is the way to go.

“Issuing fines to hawkers who fail to comply with regulations is only part of the solution.

“We need to educate them to ensure cleanliness and to discharge waste responsibly.” 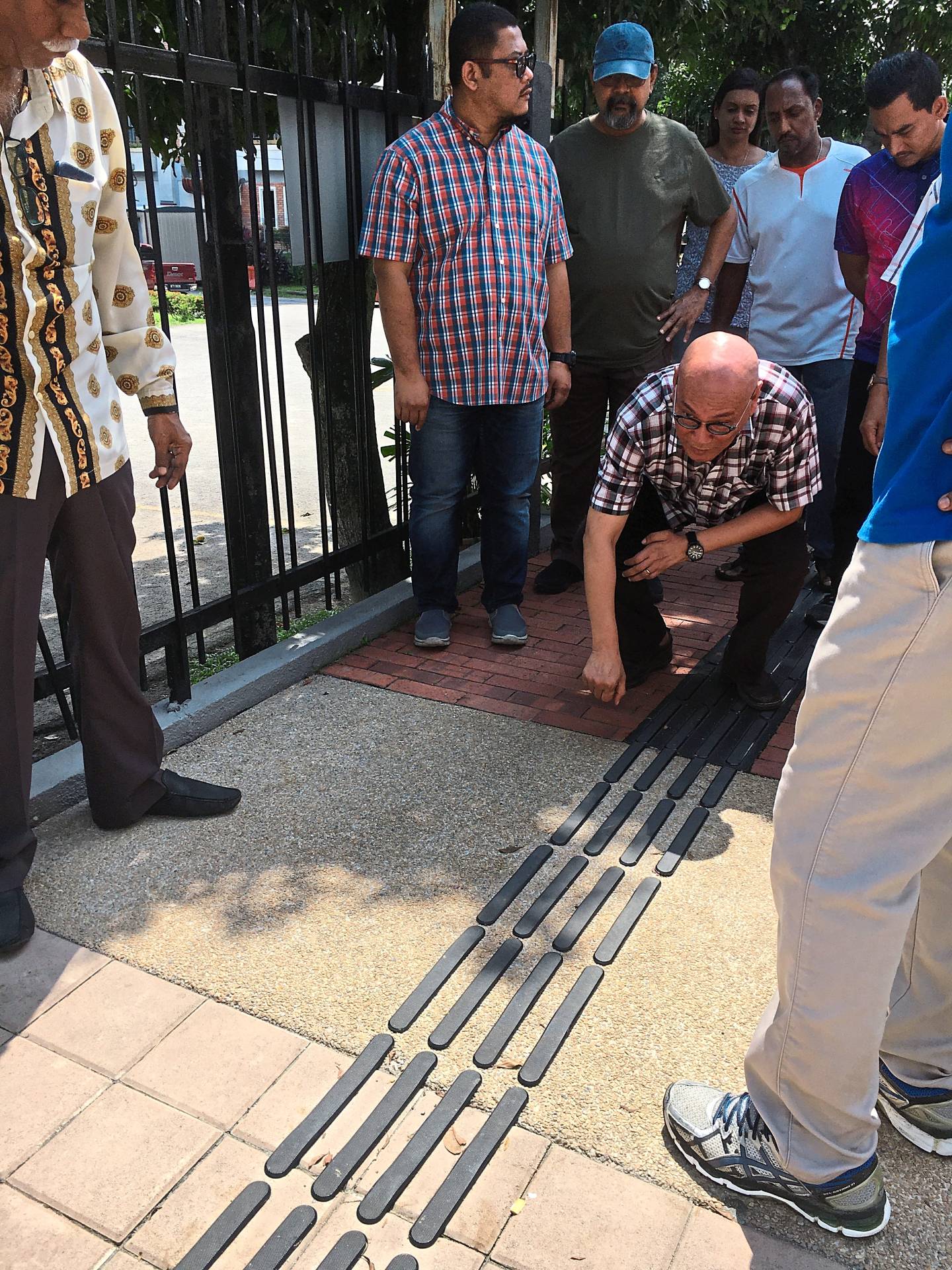 Nor Hisham checking out a tactile pathway installed in Brickfields. — Filepic

He also hopes to provide a suitable indoor place in the future for all hawkers to do business.

“As we become a developed nation, it will not do for hawkers to prepare and sell food by the roadside, ” he opined.

Nor Hisham said special attention must also be given to the disabled and the elderly in city planning.

“In Brickfields, tactile blocks were installed on the sidewalks to help the visually impaired to navigate.”

Commenting on the increase in the average life expectancy of Malaysians, he said KLCP2040 would adopt measures to enhance the life quality of senior citizens too.

Flash flood occurrence in the city had not escaped his notice, and Nor Hisham stressed that KLCP2040 would be a crucial tool to address the issue.

“The plan will detail the plot ratio and the purpose of each site.

“It will help us plan ahead and ensure adequate measures are taken to minimise future flooding, ” he said, adding that DBKL also deployed immediate response team to an affected area following flood reports from the public.

“When we received a report about stagnant water at the Kuen Cheng High School in Jalan Syed Putra recently, DBKL went there to fix the problem.”

“More flowers and greenery will be planted in many locations within the city, while still retaining the identity of our nation.

“We hope to turn Kuala Lumpur into an even better tourism product and attract more tourists, especially in conjunction with Visit Malaysia Year 2020, ” he added.

Nor Hisham concurred, saying that more lights would be installed in strategic locations to make the city a merrier place at night.