More than a bad cough

A chest x-ray of a TB patient will be filled with patchy opacities and cavities indicating infection waiting to rupture and disperse germs into the air. — Filepic

THE death rate for tuberculosis (TB) was nine times more than dengue in Selangor last year, based on statistics from the Selangor Health Department.

From January to June this year, an estimated 152 out of 1,929 TB cases were reportedly fatal.

In comparison, deaths from dengue in 2018 were recorded at 41 cases and an estimated 30 cases from January to June this year.

Last year, the districts of Petaling, Gombak, Hulu Langat and Klang were identified as having the highest number of TB cases in Selangor. 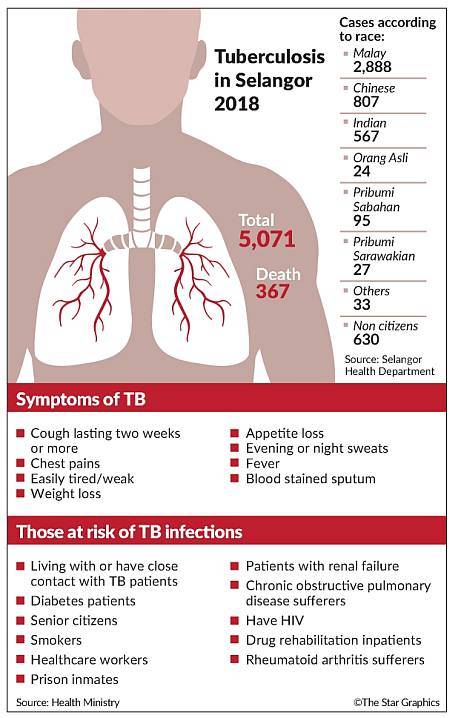 Who is at risk

On their Facebook page this January, Health Ministry (MOH) named prisoners and residents of drug rehabilitation centres as vulnerable to tuberculosis. Those in close contact with the patient, senior citizens and healthcare workers are also susceptible.

“The disease is spread by air. It thrives when the immune system is weakened, where there is malnourishment, crowded living conditions and in places that do not receive enough sunlight, which can kill the bacteria, ” said Selangor Health Department deputy director for public health Dr B. Venugopalan.

The infection rate for the disease, which usually attacks the lungs and can damage all parts of the body except the nails and hair, stands at a ratio of one to 10.

This means for every one TB carrier, 10 people can be infected.

“The longer you wait to receive treatment, the greater the chances of it infecting others as the germs are spread through coughing.

“To ensure that the disease is caught early, a cough that has gone unresolved for two weeks must be checked, ” said Dr Venugopalan.

Testing and treatment for the disease is free at all government clinics.

Diagnosis is done via a sputum smear test and chest X-ray.

Those who refuse treatment will be committing an offence under the Prevention And Control Of Infectious Diseases Act 1988, which can see them imprisoned for no longer than five years or fined not more than RM1,000 or both.

A patient can also be incarcerated in a treatment centre for eight months under this Act.

“We have effective drugs. If a patient comes in early, he can be cured with no residual pathology, ” said Dr Venugopalan.

However, the real danger is when a patient defaults on treatment, which follows a six-month antibiotic course.

“Some patients do not continue with treatment once they start feeling better. This is when the disease becomes drug resistant and ends up being harder to treat.

“At this stage, the patient is only partially treated thus he can spread the bacteria to others, ” he explained.

Underlying stigma is another reason why sufferers shy away from seeking treatment.

According to health professionals, there is fear among the people of being ostracised as public perception of the disease is that it only affects HIV patients, drug users and the poor.

Dr Venugopalan also noted that 75% of patients earned less than RM1,000 a month.

“This is the group that is most susceptible to the causes that enable the disease to thrive, ” he added.

He said screenings were being actively carried out as well for families, relatives and close associates of patients to be tested for the disease as latent carriers.

Latent carriers, he said, did not display any symptoms and could unknowingly spread the bacteria to others.

“We would also be looking at working with Combi (Communication for Behavioural Impact) units involving local councillors, residents representatives and community leaders to help with awareness programmes and report cases, ” added Dr Mas.

The department suggests that MOH give a quantum of RM500 in financial aid to needy patients to encourage them to complete the six-month treatment course.

This, said the department, could be disbursed after the patient had ingested the prescribed drugs by taking it in front of a trained medical personnel where he is seeking treatment.

“The disease is a local problem and cases are increasing together with population size, ” said Dr Annabella.

But she warned that illegal immigrants who had not taken the mandatory screening for the disease required by the Foreign Workers Medical Examination Monitoring Agency (Fomema) would be a cause for worry.

She said the state Health Department was not going to close an eye to the problem.

“If a foreign worker has TB, he can come in with a referral to any government clinic and receive treatment for free, ” she assured.

In a circular issued in April by Health Ministry secretary-general Datuk Seri Dr Chen Chaw Min, it was stated that foreigners would be exempted from paying fees for outpatient treatment, lab tests and medical investigative procedures for cases involving contagious diseases such as Ebola, yellow fever, typhoid and tuberculosis.

Conditions, however, are subject to guidelines set by an earlier circular issued in 2017 which states that walk-ins and health tourists are not eligible for such exemptions. 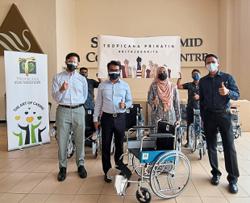