(From right) Alexander Tan Wai Teng, Gan Zhen Hong and Voon Zhen Liang, all 24, from USM cheering and showing the trophy they won for their rehabilitation machine for stroke patients.

He said the ongoing US-China trade war was opening higher opportunities for Penang to attract an increase in investments from existing players based in Penang who supply to US multinational companies.

“The opportunity to attract new players to Penang in the E&E sector is at a historic turning point, as the industry’s ecosystem in Penang is already well established.

“Many of the companies are rethinking their supply chain and many of them, which would have in the past increased their footprint in China, now wants to have a diversified production channel. 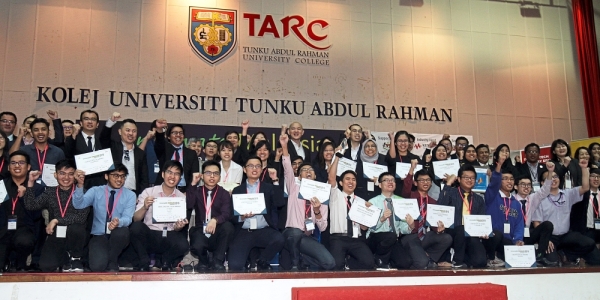 Ong (back row, middle) having a group photo with all the winners during the prize-giving ceremony at Tunku Abdul Rahman University College in Tanjung Bungah. — Photos: CHAN BOON KAI/The Star

“The opportunities to increase investment to Penang and other parts of the country in the E&E is very good,” he said during a press conference on Monday.

Dr Ong said the country as a whole was hoping to capture opportunities flowing out of the trade war.

“Existing industry players which expanded their capacity recently before the US-China trade war are now benefiting from it.

“Those already operating in the country are benefiting from the production diversion and we want to capture more opportunities like these,” he added.

He declined to reveal the potential big names which are expected to come in. 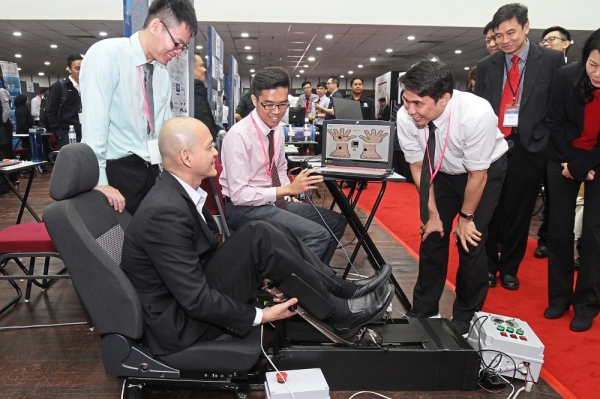 Ong trying out the stroke rehabilitation machine as the winning team members explain how the machine works.

Earlier, he handed out prizes to winners of the Innovate Malaysia Design Competition 2019 during a ceremony in Tunku Abdul Rahman College University.

A total of 636 students from 29 universities took part in the event, which saw RM117,500 cash prizes given out to 56 winning teams.

The device measures the brain response of patients via electroencephalogram during rehabilitation therapy.

The system is capable of producing data to be analysed and determine key indicators to quantify the recovery of patients.