AUDINARY Day is a campaign to promote public acceptance of people with autism.

During an event organised by A Plus for Autism in collaboration with Echo, a public relations student group from Taylor’s University, beauty queens advocated autism acceptance by sharing personal experiences about people they knew who are autistic.

The event at Sunway Putra Mall, Kuala Lumpur included a series of performances, art showcases by autistic artists Yuri Azzari and Art Jamila, as well as an arts and crafts workshop for children.

The beauty queens also took part in a sensory jar-making workshop and created their own receptacles which would be given to children with autism.

Alexis, who has an autistic nephew, also joined the #YourAcceptanceMatters movement. “Diversity doesn’t just apply to accepting someone’s beliefs, culture, values or skin colour but it also means accepting those who differ from the norm.

“There’s no rule of what normal should be. Hence, anyone can be special in their own way,” she said.

A series of fundraising campaigns to help underprivileged children with autism were also held at Sunway Putra Mall and Taylor’s University Lakeside campus.

The public pledged to support autism acceptance by making a simple “A” sign and sharing it online together with the hashtag #IAcceptAutism.

A Plus for Autism founder Dr EJ Khew said, “We hope that through this campaign, more people will accept and not stigmatise people with autism.”

Echo also presented a cheque for RM3,000 to Khew. 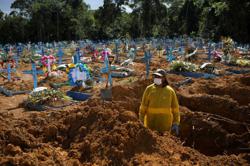