The Skypark Link train service uses a three-coach train which is able to accommodate up to 300 passengers at a time.

IT is a weekday morning and Muhammad Shahidul Islam Pranto is the only passenger to board the Skypark link connecting KL Sentral to the Skypark Terminal at Sultan Abdul Aziz Shah Airport (better known as Subang airport).

In just 30 minutes, he disembarks and walks 10 minutes to the airport, having enjoyed a peaceful, if not lonely ride, without the usual hassle of commuters jostling for seats.

Touted as a faster and more convenient way to get to the airport from the city, Keretapi Tanah Melayu Bhd (KTMB)’s KL Sentral-Subang Jaya-Skypark Terminal link was launched in May last year, with a projected ridership of 3,000 passengers daily. The arrival and departure times for the train service should be posted on the digital information board at the airport.

But now, 10 months on, the actual number of users is far lower, with sources claiming only 160 passengers board the train every day. That means most of the time, the trains run empty.

The train service, which runs a distance of 26km at 60-minute intervals, links the busy transport hub of KL Sentral with the airport and Skypark Terminal, with one stop in Subang Jaya.

By offering a direct link to Skypark Terminal and its surround­ing area, the service was supposed to tap into the needs of thousands who have to travel there for work or catch a flight.

After all, the fare is reasonably cheap at only RM11 one way (RM10 for Touch n Go users), and far more affordable compared to taxis or even riding apps. But clearly, the service has failed to gain ground. Muhammad Shahidul has the coach to himself as he travels from KL Sentral to Skypark terminal. — Photos: Nur athirah FarhaNa Pawzi/the Star

What’s even more surprising is that not many know the train service even exists, as revealed in a survey by StarMetro at Subang airport.

Dayang Nuramah Abdul Ghani, who runs a training centre for airline cabin crew, said most first-time visitors are unaware there is a train station opposite the airport.

This is because tall trees are obstructing its view.

“A signboard positioned to face the airport on Jalan Lapangan Terbang Subang will be an effective way of informing the public,” she said. 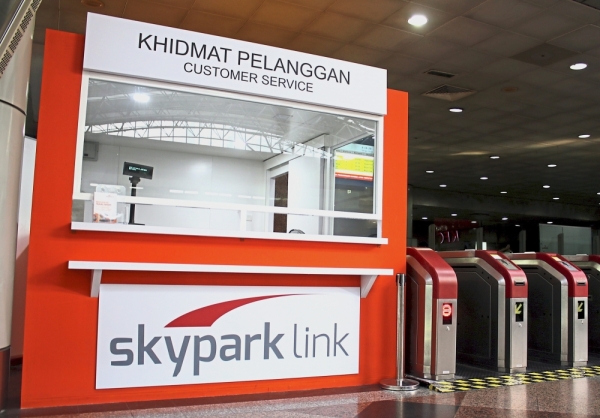 There were no staff at the Skypark Link customer service counter as there were hardly any passengers to cater to.

She also feels there should be clearer signage on directions to the train station from the airport.

Another contributing factor to the train’s unpopularity is the 10-minute walk from the station to the airport via a covered (but not air-conditioned) walkway.

Those interviewed felt the distance was too long and not comfortable, especially if it rains or the weather, too hot.

Stevie Fernando, who has 14 years experience as a cabin crew, said his colleagues prefer to drive rather than take the train.

“Cabin crew attendants like to be in air-conditioned places when in uniform so their make-up won’t run. They don’t like to sweat as it causes body odour and makes passengers uncomfortable,” said Fernando.

Mala Irisaya, who works at the Subang airport taxi counter, said travellers find the train service inconvenient, especially if they have luggage or children in tow.

“It’s cheaper to take a taxi for groups,” she explained.

She also suggested an informa­tion board announcing train arrival and departure times so passengers won’t have to walk all the way to the station, only to find out the train has left and the next coming an hour later. Muhammad Shahidul has the coach to himself as he travels from KL Sentral to Skypark Terminal. — Photos: Nur Athirah Farhana Pawzi/The Star

She also brushed aside complaints about the train station’s visibility, stating that the size of the structure was large enough for people to see.

As for the signboards, she claimed there were more than enough and placed strategically near the entrances, escalator, mezzanine floor and the link bridge. She pointed out that there was also a promotion booth for the train service at the exit of the arrival hall.

Addressing the low ridership of the train service, Azura Elliana said it had to do with external factors.

“What has really affected ridership is a drop in passenger numbers after Firefly suspended direct flights from Subang airport to Seletar Airport in Singapore from Dec 1,” she said.

An estimated 13,000 Firefly passengers were said to be affected when the suspension was announced last November.

Technical issues were cited initially. Later, it was revealed that the suspension was related to the instrument landing system (ILS) at Seletar Airport, which Malaysia had objected to. Both countries are still in the midst of negotiations and until it is resolved, Firefly’s flights to Singapore remain suspended.

At present, Subang airport only caters to flights to Batam, Indonesia and domestic routes within Peninsular Malaysia except for Kuantan, Melaka and Ipoh.

Malindo and Firefly operate from here, as does Raya Airways, a cargo flight service. Other flights using the airport are private jets, military, police, general aviation, maritime and helicopters.

The airport handles some 5,000 passengers daily, which coupled with the cabin crew and staff working at the Skypark Terminal, should in theory, offer enough ridership volume for the Skypark Line.

In an effort to increase train ridership, KTMB is encouraging those living in Subang Jaya to make use of the express service.

The Skypark link from Subang Jaya takes only 17 minutes to reach from KL Sentral, compared with 30 minutes by KTM Komuter and 33 minutes by LRT. The trip cost RM5 (RM4.50 with Touch n Go).

KTMB also said there are plans to include stops in Sri Subang and Glenmarie at a later stage.