COLOURFUL creatures from Nintendo’s best-selling videogame series will ascend 6,000ft above sea level to the Pokémon Festival @ Resorts World Genting from now until Feb 28 to captivate guests with.

“For the next three months, we will become an enchanted Pokémon wonderland, ready for fans to fulfil the Pokémon n Trainer code – Gotta Catch ‘Em All!” said Resorts World Genting vice-president of promotions and entertainment Kevin Tann.

“Spread throughout the halls of Sky Avenue this holiday will be amazing ways to interact with many iconic Pokémon species, from life-sized figurines that make for perfect Instagram photos to a massive inflatable Pikachu,” he said. Visitors at the festival’s launch saw a very kawaii (“cute” in Japanese) dance by eight Pikachus.

A lighting ceremony was also held for the world’s tallest Pokémon Christmas tree at the Skytropolis Funland. 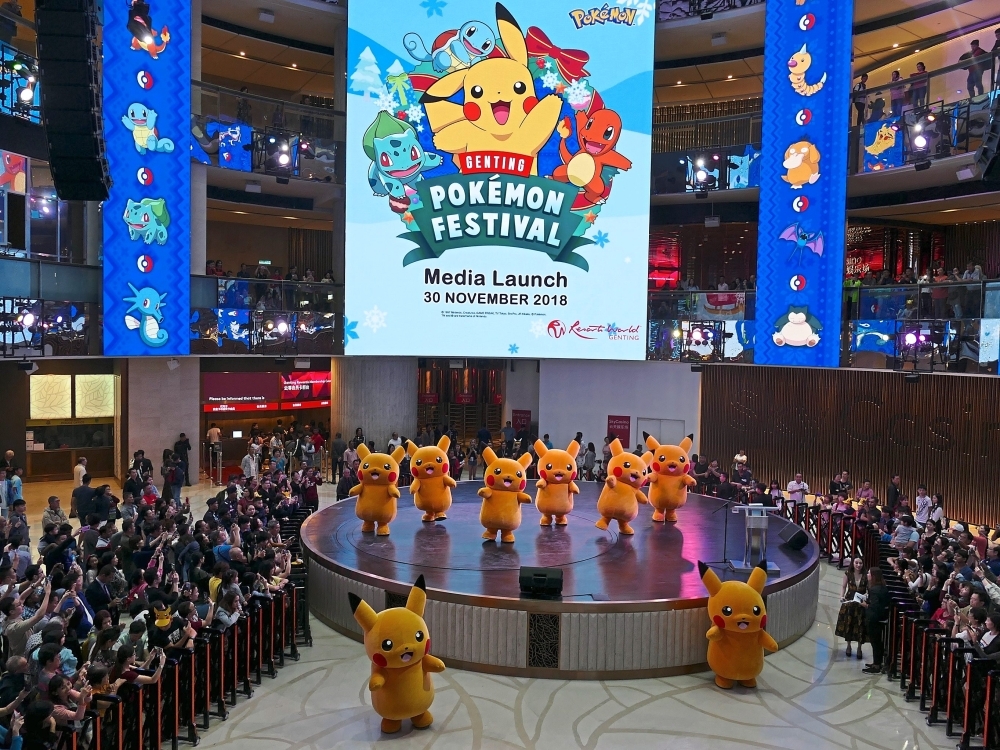 Eight dancing Pikachus delighting the crowd at the launch of the Genting Pokémon Festival.

The 13.3m-tall spectacle is also the first ever Pokémon-themed Christmas tree in Malaysia.

“As many of you know, Pokemon was born in Japan and has expanded to the United States, Europe and Asia,” said The Pokémon Company chief officer Susumu Fukunaga.

“We hope Pokemon fans in Malaysia and Asia will be entertained at the Genting Pokemon Festival and by all of the Pokemon here,” he said.

The loveable pocket monsters will be displayed in the malls of Resorts World Genting, along with dozens of other Pokémon species to celebrate Christmas and usher in Chinese New Year next year.

Fans can “catch ‘em all” by tracking down all 32 of the creatures to be unveiled in four stages at Level 3, SkyAvenue (Dec 1 onwards), Level 2, First World Plaza (Dec 15 onwards) and Symphony Stage, Level 1, SkyAvenue (Jan 10 onwards).

There will also be the Pikachu Parade taking place at various times daily on Level 1 of SkyAvenue mall, featuring eight life-sized dancing Pikachus.

For Christmas, the parade will be a winter-themed extravaganza, with Santarina, Giant Xmas Balls, and elves on two mini-floats.

For Chinese New Year, the parade switches to a raucous red-and-gold celebration.

As the aim of the Pokémon videogame is to become a master Pokémon trainer, the Pokémon festival allows fans to live out this goal in real life.

With the book in hand, Pokémon Trainers can tackle various missions and quests spread across the resort.

Once the training is complete, trainers can present their finished trainer book to receive a set of eight limited-edition Pokémon stickers from Resort World Genting’s special Pokémon Pop-Up store.

Different missions will be available for Christmas and Chinese New Year.

The Pokémon Pop-Up store is located at Level 3 of SkyAvenue Mall, the store will feature a huge array of premium merchandise and memorabilia imported directly from the Pokémon Centre in Tokyo, Japan.

It is the perfect place to pick up a present for Christmas or prepare for the festivities of Chinese New Year.

At Vision City, visitors can collect different Pokémon tretta chips and get limited free ones from the Pokémon Pop-Up Store on a first come, first served basis.