Pitching their way to top placing

IT WAS the simple solution to everyday problems that won the final rounds of The Entrepreneur Colosseum (TEC).
After a gruelling pitching round, dress rental service platform Dresstal and foam car mat seller Trapo came out champions of the TEC Alpha and Beta category, respectively.
“There is a big problem with the current car mat as it is very dirty, unhygienic and sometimes smelly. It is also not good for children because there is a lot of toxics trapped in the car mat,” said Trapo co-founder Zare T.E. Lee.
Together with his brother Tzong Lee, the two co-founded Trapo, an online-to-offline service which provides an effective car carpet solution using recycled EVA foam.
“We have implemented the EVA foam in our products which we custom-made for all car models,” said Lee.
The company, which walked away with a RM150,000 cash prize, hoped that the win would serve as a show of thanks to the entire team for its hard work.

(From sixth left) Ang, Sungei Pelek assemblyman Ronnie Liu and See with the Alpha and Beta winners of the The Entrepreneur Colosseum.
“We did this because of the team. They are the people who supported us and we have been telling them that what we do has regional impact,” Lee added.
Meanwhile, for Dresstal co-founder Tan Hooi Sin, what started out as an everyday problem for women became the backbone of its fashion sharing platform.
“Women have a habit of not wanting to wear the same dress for multiple events and that’s where we actually help them.
“We are a platform that lets them put their dresses for rent on our website. We turn every dress into our capital,” she said, adding that customers could rent a dress for up to five days.
Tan said the idea came about as she noticed there is a demand for sharing economy.
“We saw many people sharing space and accommodation such as Airbnb as well as transportation. So we asked ourselves, ‘what else can we share among women’?”
Established in May 2017, Dresstal has seen much positive response.
“A lot of people support fashion sharing because they feel that it would be a waste if they only wore a dress once.
“So far this year, from June until now, we have had more than 300 transactions on our website,” she said.
On winning the RM100,000 TEC Alpha prize money, Tan said she was planning to invest it in Dresstal’s marketing.
Organised by Persatuan Usahawan Maju Malaysia (PUMM), the final showdown capped the one-day PUMM Entrepreneur Day held at Putra World Trade Centre, Kuala Lumpur. 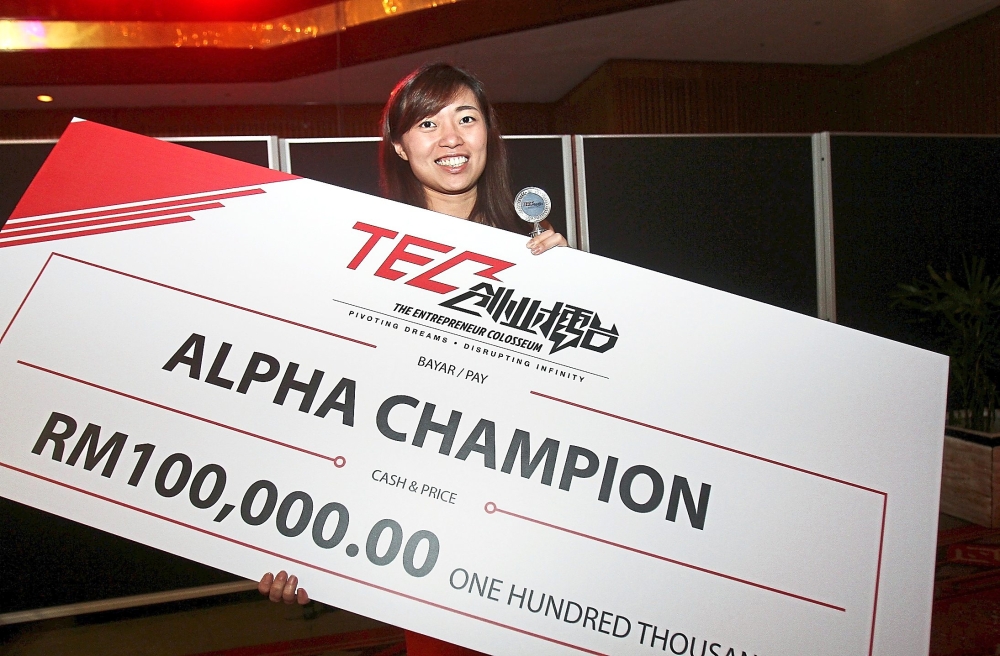 Tan says the idea for Dresstal came about as she noticed there is a demand for sharing economy.
“I think the event was quite successful and we hope that the government can help more by joining us to run similar events in the future,” said PUMM president Datuk See Kok Seng.
He hoped that the Government would lend a hand in organising the events and provide special tax rebates and financial assistance so that the winners and finalists could kick-start their growth.
“Perhaps the Government could subsidise the venue or offer the startup winner and finalists some tax rebate, low-interest micro loan or a simplified application of the company,” he said.
On the pitching’s outcome, PUMM Entrepreneur Day organising chairman Datuk Seri Alvin Ang was impressed by the finalists’ performance.
“All the judges felt satisfied with their performance and were impressed by their innovative ideas.
“We hope that through this activity, we can help create more successful startup entrepreneurs,” he said.
Unlike other competitions, TEC threw in an extra challenge to groom contestants to face real-life challenges.
“Today’s pitching is a bit different. Other than the presentation pitching and judges Q&A, we had an additional stress test question and opened it to public voting.
“We are doing this because they need to handle some real-life situations that they may encounter in their future entrepreneurial journey,” Ang added.
TEC Final is part of the PUMM Entrepreneur Day as a platform to help develop new startups and young entrepreneurs to grow.
Other events during the Entrepreneur Day included bazaar startups, speed dating with angel investors and business conferences.
Article type: metered
User Type: anonymous web
User Status:
Campaign ID: 18
Cxense type: free
User access status: 3