Dorahaisa took more than 15 minutes to figure out how to use the app though she had to deliver an urgent document to the Health Ministry building in Putrajaya.

Motorists wanting to park in Putrajaya’s gated and closed parking lots are finding the cashless parking system a hassle.

While those who have Touch ‘n Go (TNG) cards can breeze in, those without have only two choices – an about turn or download the Parkbyphone parking app.

Putrajaya Hospital nurse Dorahaisa Abdullah, a first-time visitor to the gated parking lot at the Putrajaya Corporation complex, was one of those seen backing out of the parking lot after she found the machine unable to issue tickets.

Dorahaisa did not have enough credit in her TNG card so she tried to download the parking app on the spot. It took her more than 18 minutes to figure out how the app works.

“I was worried about holding up traffic while waiting for the app to download,” said Dorahaisa, who had to find a quieter spot to figure how the app worked.

She gave up upon encountering problems at the payment stage due to an intermittent lack of response in the app’s buttons which stopped her from selecting a bank and mode of payment.

Contractor Foo Chee Siong who parks in Putrajaya regularly said older people who are not savvy with smartphone applications will find it hard to use the phone app.

Foo prefers to use his TNG card because it is more convenient to tap in and out.

Senior citizen Salmah Mohd Syed who resides in Putrajaya feels the cashless parking system is troublesome for people who do not have smartphones with a data plan or a TNG card.

“Sometimes I park by the side of the road, praying that nothing will happen. But enforcement in Putrajaya is strict and cars are clamped frequently,” said Salmah.

Khairul Hassreey, account manager at Digital Tempo, the company subcontracted by Pengangkutan Awam Putrajaya Travel and Tours (PAPTT) to come up with the parking app, said the system was implemented last August in line with Putrajaya’s vision of being a cashless smart city.

“The system was fully activated this February. We have 2,000 users, most of them in government service who opt to pay for monthly season parking via the app,” said Khairul.

He added that the app is not exclusive to one spot but is also in nine other areas in the administrative capital, namely Putrajaya Central, Kompleks Kerajaan Parcel B, C and E, Putrajaya Corporation parking lot A and B, Customs Department and Laman Perdana.

“The app has a global positioning system which can auto locate, freeing the user from the need to fill up information columns. Upon touching the gated or closed parking function, a quick response code will pop up. Just scan it upon entry and exit,” said Tengku Amir. 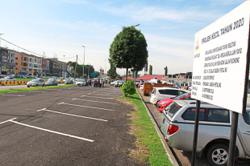 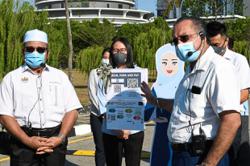