PETALING Street in Kuala Lumpur has been around since the 1880s and this old part of Kuala Lumpur is seeing a change as pre-war shophouses are being spruced up and injected with new life.

Take a walk down Petaling Street (Jalan Petaling) and Jalan Sultan and be greeted by restored premises which are adding a new dimension to the city’s old quarter.

This is due to efforts of new investors who have done their bit to save the area’s heritage, popularly known as Chinatown.

Not only have buildings been restored, the investors have also taken measures to help patrons understand the history of the place.

Many shophouses previously scarred by flashy fixtures and shoddy repairs are reverting to the splendour of their heyday.

Jao Tim Cafe (pic below), which is housed in a 1910 building, brings back the Art Deco-style lustre of the era. The name reminds patrons that this used to be a hotel, while its original structure and raw walls enhanced with brass fixtures and wooden counters are telltale signs of the years gone by.

“We want to ensure that even when we leave this building, we leave no damage to it at all,” said proprietor Jon Teo, 38 (pic below, left), adding that eight months of renovation works was invested in the place.

The cafe, managed by Jian Tan, 28 (pic below, right), is also an events space, while the mezzanine floor is open for use as gym area or design workshop.

“Kuala Lumpur is the capital city but Penang and Melaka are often the focus when people talk about our history.

“We hope to get people to come back to Chinatown and tell more stories about this place,” said Teo, an architect. Another venue that leaves people in awe is cocktail bar PS150, with its entrance hidden behind a toy kiosk.

PS150 recreates Chinatown’s three different eras, namely Opium Den (inspired by the pre-prohibition era in the US in the 1920s), the Courtyard (post-war era of 1950s) and the Bar emblazoned with the words Chi Chang Jie (Chinese name of Petaling Street which means Starch Mill Road).

Co-founder and chief bartender Angel Ng said she wanted to merge Petaling Street’s history into PS150’s concept, and the fact that the lot was once a brothel “gave it that added layer of history”.

“Jalan Petaling was one of the first few settlements in Kuala Lumpur and it is a place that has been neglected for years,” said Ng.

“Before we can start exploring who we are, we need to get to know our roots.

“I’ve lived in Chinatown for a short while and fostered a close connection to the area.

“The contrast of happy-go-lucky tourists and homeless people, the seasoned travellers and drug addicts, along with the availability of wholesome meals and hidden vices bring out the soul and energy of this forsaken place,” she said.

Newly opened hotel and cafe Tian Jing (Chinese for air well) pays tribute to the area’s past by adopting the name to highlight the air well feature, which is unique to pre-war shophouses. 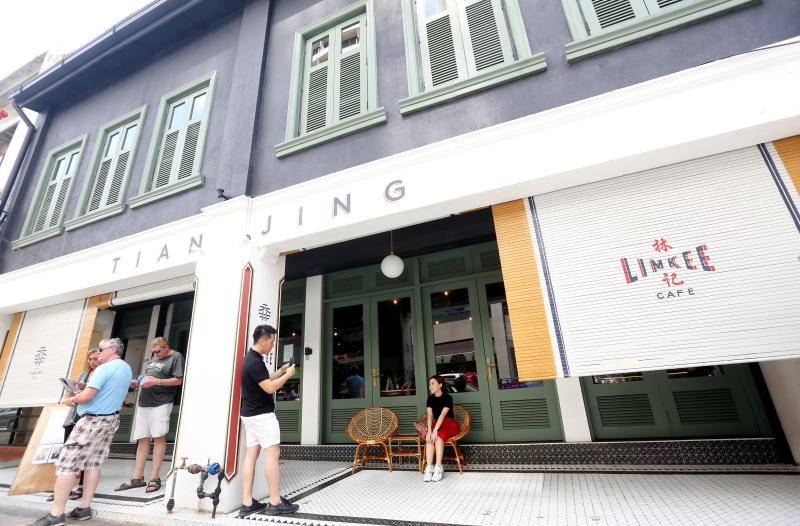 Its assistant marketing manager Marcus Lim said the furniture was hand-picked to resemble the olden days while decorations, murals, utensils and snacks in the cafe also reflected the area’s history.

Lim said older patrons loved the sense of nostalgia while the younger ones were excited to know the past.

One of its patrons even requested for her wedding photos to be taken there, because her mother once lived in the building.

“We are encouraged by the scene in Petaling Street that is becoming more vibrant, now, with many of us trying to do something to save its heritage,” Lim said, adding that the MRT has contributed significantly with more people flocking to the area.

Leaf and Co. Cafe proprietor Hermes Mah said he wanted to introduce two new concepts to the popular hangout – a cafe that replicated Petaling Street 100 years ago, and a museum narrating the life of Kuala Lumpur’s pioneers, coupled with fun experiences that appeal to the young, such as a chance to try out old costumes.

The cafe, was once in such a bad shape that it was the backdrop for a Hong Kong horror movie.

After a thorough clean-up and some minor touch-up work and clever interior decorating, the cafe has been brought back to life.

Old furniture including disused sewing machines, fill the space while green plants lend a touch of freshness to the old-world setting, where Malaysian-Chinese fusion delicacies are served.