Buddhist nun hopes to raise money to care for strays

Chow and some volunteers attend to more than 100 dogs at the shelter in Simpang Pulai.

BUDDHIST nun Chow Khoon Siew travels some 37km daily from her temple in Taman Heawood, Sungai Siput, to an animal shelter in Simpang Pulai daily to tend to rescued and stray dogs.

The 66-year-old has been making the journey since 2015, as it is the only option she has after being asked to vacate former location in an oil palm estate in Kampung Baru Sungai Buloh in Sungai Siput.

She said the businessman who allowed her to use the area in the oil palm estate took back the land two years after they set up shelter there.

“We then went asking around about another site and were introduced to a farmer who used to work the land here in Simpang Pulai.

“The farmer said he no longer wanted to work on the farm and the land would be left idle, so he suggested we set up the shelter on his land,” she told MetroPerak.

“We have spent about RM20,000 to set up the shelter,” she said, adding that she and several volunteers have also set up an animal welfare organisation, the Society For Homeless Animals Perak, which was registered in 2015, to manage the shelter.

“There are currently about 110 dogs here. Most of them were rescued by me and my volunteers while some were abandoned at our doorstep,” she added. 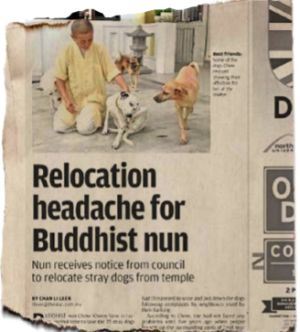 In 2013, MetroPerak reported about how Chow was seeking a plot of land to house rescued dogs. At the time, she was looking after 35 animals.

Back then, after receiving a notice from the Kuala Kangsar Municipal Council due to complaints from her neighbours, Chow moved her dogs to the oil palm estate after it was offered by the businessman.

Chow said she has been rescuing dogs in Sungai Siput over 30 years.

“Some I rescued from the streets while others were found abandoned in front of the temple then.

“I couldn’t just leave them. If they were caught by the municipal council, they would have been put down,” she said.

“I am really thankful that MetroPerak ran my story back then as help and volunteers came after the story appeared,” she added.

Chow said the current shelter is in need of funding for its upkeep and to care for the dogs. The shelter says it needs help with funding and food for the animals.

“We are getting assistance from other NGOs and kind souls who provide dog food and rice, and funds for spaying, neutering and vaccination for rabies.

“Someone also gave us a water pump so we can get water for the dogs and also to clean the shelter,” she said.

“However, we still need more food for the dogs. The shelter’s monthly expenses come to about RM10,000, with RM8,000 going to food and the rest to medical expenses,” she added.

“As for medical expenses, some of the animals need get ticks removed and other illnesses treated. Most of the dogs have also been spayed and neutered,” she said, adding that her elder sister and several society members help her at the shelter. The shelter run by Society For Homeless Animals Perak, in Simpang Pulai, has already been relocated twice.

Chow said a charity dinner is being planned in middle of the year to raise fund for the shelter.

“Our aim is to raise between RM60,000 and RM80,000. The minimum price for a ticket is RM60,” she said, adding that the dinner is set to be held at Shi Fang Zhai Vegetarian Restaurant in Ipoh on June 2.

“The money is mostly for the upkeep of the shelter and to take care of the dogs. We also hope to build more pens,” she added.