KUCHING: When Salliza Sideni wore a keringkam scarf for the first time as a young girl, its fine embroidery in gold thread made her feel special.

“I was 11 years old at the time. I think for many girls at that age, there’s a little princess inside us.

“I felt pretty wearing the keringkam and I remember thinking it was something very special,” she said.

Her appreciation for keringkam, the traditional embroidery of the Sarawak Malays, grew from that moment in 1985.

Now, Salliza is spearheading a project to document the history and stories of keringkam and to preserve the art of making it so that it does not die out.

“There is no proper, overall documentation about keringkam. What we have is a little bit here and there, so we’re thinking of putting it together, something informative and educational that can be shared,” she said at the launch of the project dubbed My Keringkam Stories here on Wednesday.

The project, which started a couple of years ago, involves collecting stories and anecdotes from embroiderers and different generations of women about making and owning keringkam. A keringkam scarf with a floral motif embroidered in gold thread. Keringkam, the traditional embroidery of the Sarawak Malays, is handstitched with gold or silver threads.

“We are targeting 100 stories which will be compiled into a book, hopefully by September. At the same time we want to document the history of keringkam in order to revive and preserve it,” Salliza said.

She said keringkam had its name from the gold or silver thread, called clinquant thread, used to embroider floral and other nature-inspired motifs on scarves worn as head coverings.

There are two types of scarves, a short piece called the “selayah” and a long piece known as “selendang”.

“In the past, keringkam scarves were worn on special occasions such as weddings.

“Many families have heirloom pieces that are handed down,” Salliza said, adding that she was wearing a 96-year-old piece from her family’s collection.

As the scarves are embroidered with gold thread priced at RM150 a spool, a piece of keringkam can cost several thousand ringgit depending on its size and how heavily embroidered it is.

The embroidery is done entirely by hand and a simple piece can take two to three months to complete.

Indicating an intricate floral lace edging on a 100-year-old piece, Salliza said such old motifs were becoming extinct because hardly anyone knew how to make them anymore. 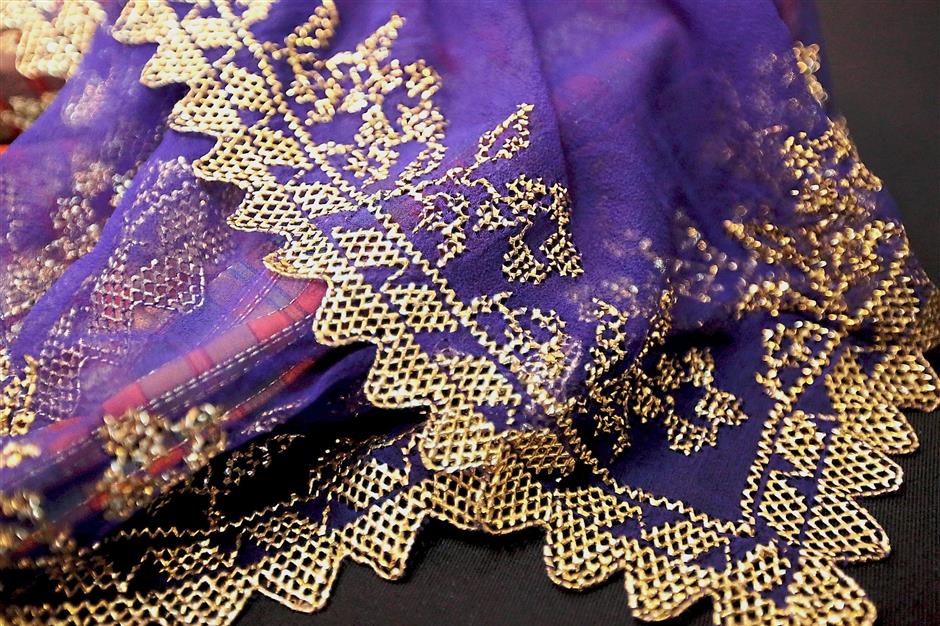 Another intricate piece of keringkam scarf golden embroidery handstitched on a purple background.

“What we’re doing now is to try to document how it is done and maybe we can revive the motif. We definitely hope that this project will bring new life to keringkam as an art of Sarawak,” she said.

Welfare, Community Wellbeing, Women, Family and Childhood Minister Datuk Seri Fatimah Abdullah, who launched the project, said it was the first step towards preserving keringkam and making it better known among the public.

She suggested setting up a mini gallery of keringkam at the women’s resource centre at Wisma Wanita here, where the project’s research findings and stories could be placed along with demonstrations of embroidering keringkam.

“Keringkam is a work of art and an important part of Sarawak Malay heritage. There must be conscious efforts to make sure that the art of embroidering keringkam is not lost but will be handed down to new embroiderers,” Fatimah said.