Rapid Penang head of operation control and support Osman Amir showing the CAT routes on Penang island during the briefing on the Congestion Alleviation Transport service.

THE Penang government’s RM15mil free bus shuttle service – Congestion Alleviation Transport (CAT) – has increased the number of its feeder buses to 52 from 46.

The project jointly run with Rapid Penang has also added a new route – Alma on the mainland.

The service is expected to start on April 1.

It now covers six routes on the island and seven on the mainland.

State Transport Committee chairman Chow Kon Yeow said the additional route required six more buses to be added to the fleet, bringing the total of buses serving the island to 29 and on the mainland to 23.

He said the service from 6am to 10pm daily would act as a feeder bus service linking commuters staying in villages and high- density areas to main bus routes. 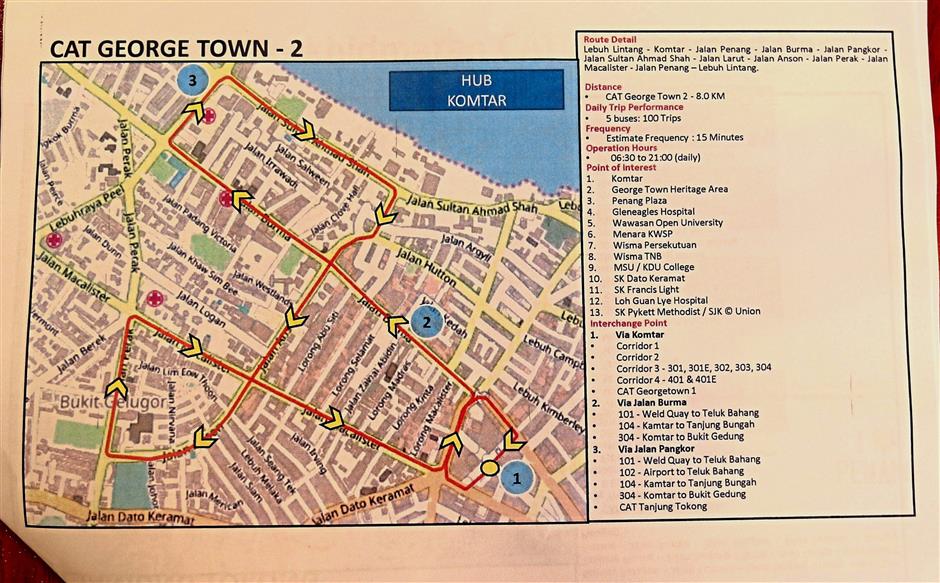 “The state government is keen to extend this free service to encourage more private car owners to use CAT instead.

“We need to identify as many points of interest as possible.

“The ideal situation would be having one bus coming to every point every seven minutes,” he said during a press conference at Komtar after a briefing session on the CAT project for elected representatives and councillors on Monday.

Chow said they would hold several focus group sessions today and Friday concerning the bus routes and other aspects of the project.

During the briefing session, Pulau Tikus assemblyman Yap Soo Huey said the operation time for CAT buses should vary based on the frequency of usage in certain areas.

“For example, CAT buses passing through Gurney Plaza could start operations at 10am instead of 6am.

“The service can end later as people working at the mall will head back home from 10pm when the mall closes,” said Yap.

She added that the Tanjung Tokong bus route should also include Penang Hospital, Caring Society Complex and the George Town library.

CAT will supplement the two existing free bus service programmes, which are the Central Area Transit which began in 2008 and Bridge Express Shuttle Transit launched in 2011.

It will provide shuttle service to every part of the island and mainland.