Pictured is a DBKL vehicle parked along the blue bicycle lanes circles the city centre, despite it being a dedicated path for cyclists to make their way on. However it has been encroached by illegally parked vehicles as pictured, even though it is right in front of Menara DBKL along Jalan Raja Laut.

HAS the new bicycle lane around the city centre become a dedicated parking lane?

It would seem so based on a quick look around.

Vehicles could be seen parked along Jalan Raja Laut on the blue lane for cyclists, ignoring the signboards indicating its designated purpose.

Ironically, on one occasion, even a Kuala Lumpur City Hall (DBKL) van was seen parked on the blue lane.

In the StarMetro story “Cyclists feeling the blues”, it was reported that the bicycle lane was created by DBKL as part of the local government’s effort to make the city greener and more liveable by encouraging people to cycle as a mode for their commute. 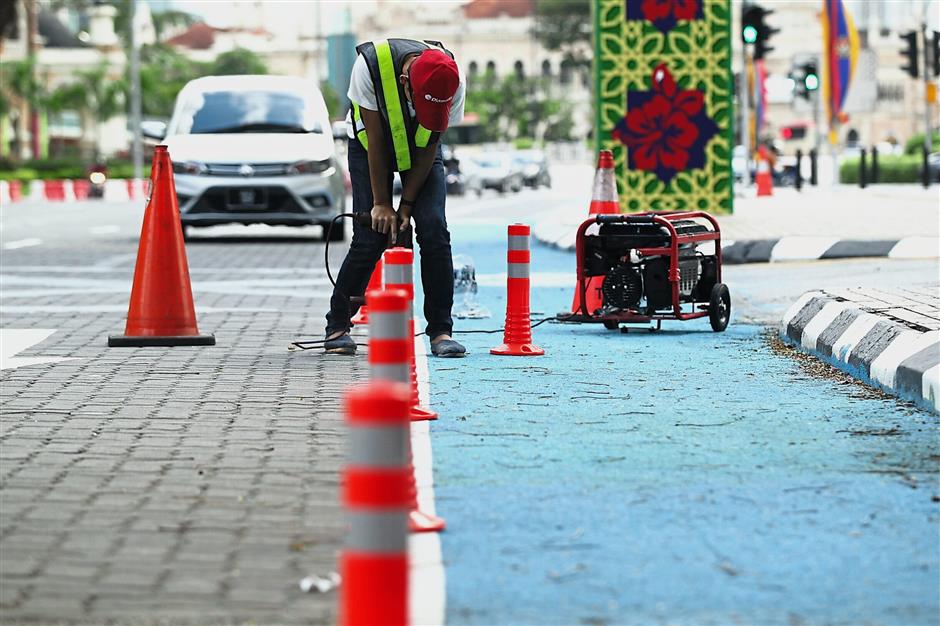 DBKL worker installing orange flexi-poles to demarcate the bicycle lane. This will not only improve safety for cyclists but also prevent motor vehicles from parking on the blue lane.

It was rolled out in time for the World Urban Forum that Kuala Lumpur is hosting starting next week.

However, the project has been experiencing numerous problems since it first popped up as bright blue ribbons on the streets of the city centre.

It began with pictures that went viral of a motorcycle accident resulting from plastic dividers embedded in the road.

There was also confusion and a public outcry against the cost of paving the lane.

Now, issues have risen because of a perceived lack of planning and enforcement to ensure the dedicated bicycle lanes remain as such –- only for cyclists.

“Usually during peak hours, at least 70% to 80% of the lanes are obstructed by cars that have double-parked, so DBKL needs to regularly station enforcement officers at these lanes,” said Kwan.

He said DBKL must be strict in enforcement by not permitting vehicles to even wait on the lanes and the authorities should immediately issue summons to the vehicle owners or deduct merit points.

“Personally, I think DBKL has not done a very good job with the bicycle lanes; they should have allocated a specific area for bicycle lanes next to pedestrian paths, that is completely separate from the road.

He stressed that there should not be encroachment of cyclists into pedestrian walkways as it serves as a hazard for both. 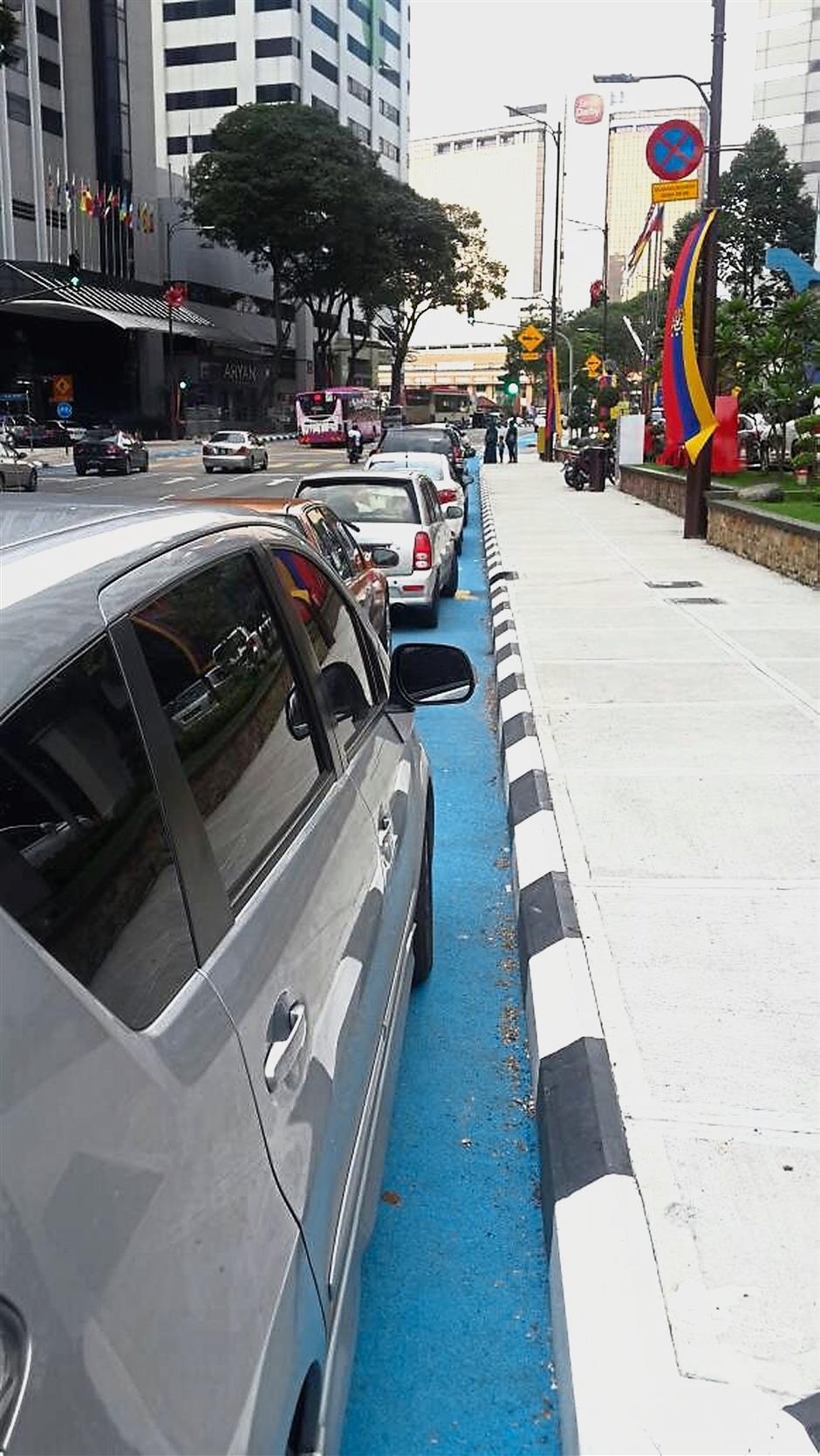 A row of cars parked in the bicycle lane along Jalan Raja Laut as their owners took advantage of the free space.

“Design for the lane has to be systematic, so if bicycle paths are placed on the left-most side of roads then it should be continuously done so. But these lanes seem to be all over the place.

He urged DBKL study the bicycle lanes further during car-free mornings by getting cyclists to only use those lanes and give their feedback on it.

“We have to drive a lot slower to watch out for motorcyclists as well,” he said.

Nikki Tan, who also works in the city, suggested that it might be a better idea to create a separate lane for motorcycles as well in addition to bicycle lanes for the safety of all road users.

“It is good to have a bicycle lane, but now I need to be extra careful in watching out for motorcyclists weaving in and out between the bicycle lane and the main part of the road,” she said.

In addition, she said that she also had to be wary of cyclists who sometimes veer into the vehicle lane to avoid a car parked on the blue strip.

“There should not be a problem if the lanes are properly planned and are consistent. And DBKL should also think of pedestrians,” Tan added.

Lawyer P. Nirumala, 30, who works in Bangsar but has to make regular trips downtown, said she felt apprehensive even though she had yet to see the bicycle lane’s effect on the traffic.

“I think the idea is good, but its execution is not well thought out.

“I am used to narrow roads in the city because drivers are always creating their own lanes during peak hours, turning three lanes into five.

“But just because I am used to it, does not mean there is no danger in narrowing the lanes as it increases the margin of error among road users,” she said, commenting on the reduced motor lanes from 3.66m to 3.05m to accommodate the bicycle lanes.

She said that while she understood the good intention behind creating a bicycle path in Kuala Lumpur, doing so in highly congested areas had not been effective so far in meeting its purpose.

Nirumala said the illegally parked cars were nothing new.

“People have been double-parking on Kuala Lumpur roads before the bicycle lanes anyway, but I guess now that the space has been clearly demarcated for use by cyclists, who may not often use the lane, some drivers will take advantage of it.

“I think a better plan would be to upgrade public transport and related infrastructure networks to increase pedestrian mobility,” she said.

Nirumala, who often moved around on foot, especially in the heart of the city, noted that Kuala Lumpur was mostly pedestrian friendly although there were some areas with no pedestrian pathways.

“Pedestrians should be a priority in city planning, and it is unreasonable when cyclists sometimes use the walkways,” she added. 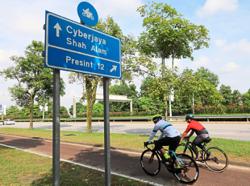 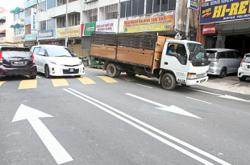