Rotting rubbish on the awnings of PPR Seri Selangor shows the residents’ habit of littering from their balconies. — Photos: SAMUEL ONG/The Star

There are 72 PPR and PPA flats in the city but Loga Bala said priority was given based on the high number of complaints involving falling objects that caused injuries and damages.

The decision was made following the death of 15-year-old S. Sathiswaran, who was hit by a chair believed to have been hurled from the upper floors of PPR Seri Pantai in Pantai Dalam.

According to DBKL, this was the first fatal accident caused by a falling object in the city.

Loga Bala said before the concrete slabs were built, safety nets would be installed at some areas as a precautionary measure.

“The safety net is not a good solution as it will be difficult to maintain. 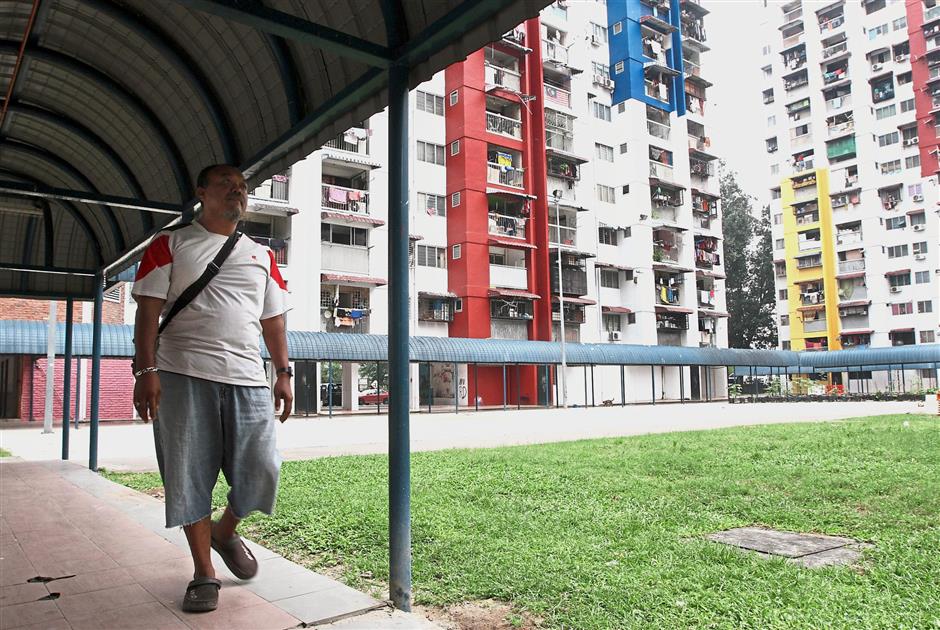 Covered walkways along the perimeters of the park in PPR Sri Sabah protects residents from falling objects.

“Rubbish may get stuck there and result in other problems like foul smell, if it is not cleaned promptly.

“So, it is a temporary measure, following which, a permanent concrete slab will be built,” Loga Bala said.

“We are taking this matter seriously. When something like this happens, the public put the blame on enforcement, when the real problem is the irresponsible and inconsiderate people who need to be taught about community living,” he said.

Loga Bala said a new contractor had been given the task to maintain and be in-charge of over 1,000 closed-circuit televisions (CCTV) that have been installed in PPR and PPA flats in the city starting Feb 1.

“Most CCTVs are at the lift area. Previously, the surveillance was done by DBKL themselves.

“With the new deal, there will be a control room at the Transport Management Centre in Bukit Jalil.

“We will not hesitate to take action which includes terminating the tenancy agreement of any resident found flouting any rule under the agreement,” Loga Bala said, adding that the police had identified the owner of the chair which hit Sathiswaran but have yet to identify the person who threw it. DBKL Community Development and Urban Wellbeing Department director Wan Mohammad Ghazali Nor said a safety net was installed some 10 years ago at PPR Seri Pantai but the project failed.

“The net costs a lot in terms of maintenance. The residents continued to throw rubbish out their windows and balconies and it gets stuck in the net.

“The cleaners had difficulty clearing the rubbish.

“As it is, DBKL spends about RM145mil in maintenance for PPR and PPA annually. This figure does not include the 543 lifts under our care. So, the project failed.

“With a concrete slab or roof, it would be easier to clean as the cleaners can walk on it,” Wan Mohammad Ghazali said, adding that the cost of building the concrete slabs would be covered by the RM145mil budget.

He said DBKL would inspect all 13 selected flats to see if there was a need to build concrete slabs or extend the existing structures.

“DBKL and the police will collaborate on campaigns to increase awareness on civic consciousness among residents there,” he said.

There were also talks of appointing a head for every block and floor to take care of the peace and cleanliness of their surrounding.

“The heads will be given incentives and recognition for their efforts,” Wan Mohammad Ghazali said. 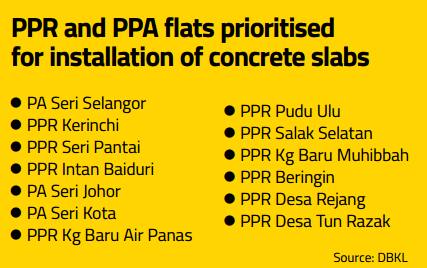 “A 12-year-old boy was struck by a metal rod hurled from the upper floors.

“He suffered serious head injuries and underwent a series of surgeries.

“He has since recovered but his scars remind the people of the irresponsible act of some of the less civic-minded residents,” he said.

Hafiz added that the problem of littering from above at PPR and PPA was viewed as normal, and there were a few repeat offenders in his area.

“Bottles and rubbish are often thrown from above. I have received many complaints of vehicles damaged by these objects.

“Perhaps DBKL can install CCTVs to identify the culprits and take action,” he said.

“The authorities should not sympathise with the culprits who throw rubbish indiscriminately.

“I have seen a supermarket trolley being thrown from the upper floors which missed my neighbour by mere inches.

“It was a traumatic experience for my neighbour,” he said.

“I am not only talking about those who throw rubbish or items off the building but also those who are a nuisance and cause obstructions or inconvenience to other residents.

“Parents should educate their children to not litter, what more from above.

“Some parents do not supervise their children’s behaviour that may cause harm to others.

“In such cases, parents should be held accountable.

“We should not pity the culprits anymore and evict them immediately,” he said.