Company works to help hospitals make use of IT

Growing adoption: The company’s system is now in use in hospitals in four countries.

THE goal of Malaysia becoming a high-income nation under the Vision 2020 initiative is a challenging task and doesn’t get easier by the day.

As the sector with the largest number of businesses in the country, the small and medium-sized enterprises (SMEs) sector is being counted on to increase its contribution to the nation’s gross domestic product from 32% in 2010 to 41% by year 2020, as well as increasing its share of exports from 19% in 2010 to 25% by 2020, among other things, according to the SME Masterplan 2012-2020.

Business as usual simply won’t cut it. Realising this, Centium Software Sdn Bhd managing director Ravishanker V. Thambiah, 53, used Albert Einstein’s quotation about doing the same thing over and over again and expecting different results being the definition of insanity, as the inspiration to innovate his hardware-based telecommunications solutions company to become a software developer for the healthcare sector, specialising in hospital information systems (HIS).

Ravishanker, began by setting up Asiankom Communication (M) Sdn Bhd in 1997 with RM10,000 in a rented 700sq ft office in Alam Jaya, Cheras, to offer telecommunications consultancy services, had subsequently expanded to provide full-scale solutions including the telecommunications hardware involved.

“My first client was a Japanese MNC manufacturing telephone systems that I worked with as a consultant to help them with the South-East Asian market. Before that, I had been an employee with a company that had over-leveraged prior to the Asian Financial Crisis,” he told Metrobiz.

As the financial crisis got worse in 1998, the client cancelled the contract and Ravishanker became a dealer of telephone systems for the enterprise market. He says he was able to do so thanks to the goodwill of the suppliers who provided generous credit terms. First step: The hospital information system (HIS) is used beginning with the front counter where patients are admitted.

“We hired two specialist to market voice mail and call billing products to banks, government agencies and factories,” he says.

As technology advanced, he moved on to work on computer telephony as phones started to becomepart of a larger network of information systems.

His first foray into this direction came in 2004 with a alternative healthcare provider that wanted to improve its call centre.

With the help of Saravanan Govindasamy, 37, who had experience in developing software for mobile phones, Ravishanker set up Centium Software Sdn Bhd to look into exploring this segment further. Today, Saravanan is also director and chief technology officer of Centium Software.

“We figured that we did not want to run around pulling telephone wires forever. We were also looking at how to provide more value, and this was one opportunity where we create ‘middleware’ that translates the information within the customer relationship management software and the private branch exchange telephone switching system within an enterprise that switches calls between VoIP (voice over Internet Protocol), allowing the contact centre officer to access caller’s information and prior transactions, and other information when customers call in,” Ravishanker says.

In 2005, the company was requested by a private hospital to solve database gridlock, where the various information systems of different departments, from billings to medical records, stopped functioning due to data being locked and inaccessible to various departments at the same time. The phenomenon used to be common within IT systems that handled a high number of transactions.

“We sorted out the issues in two weeks, and later, they wanted us to look into their hospitals’ IT systems in Vietnam, India and Indonesia,” Ravishanker says. 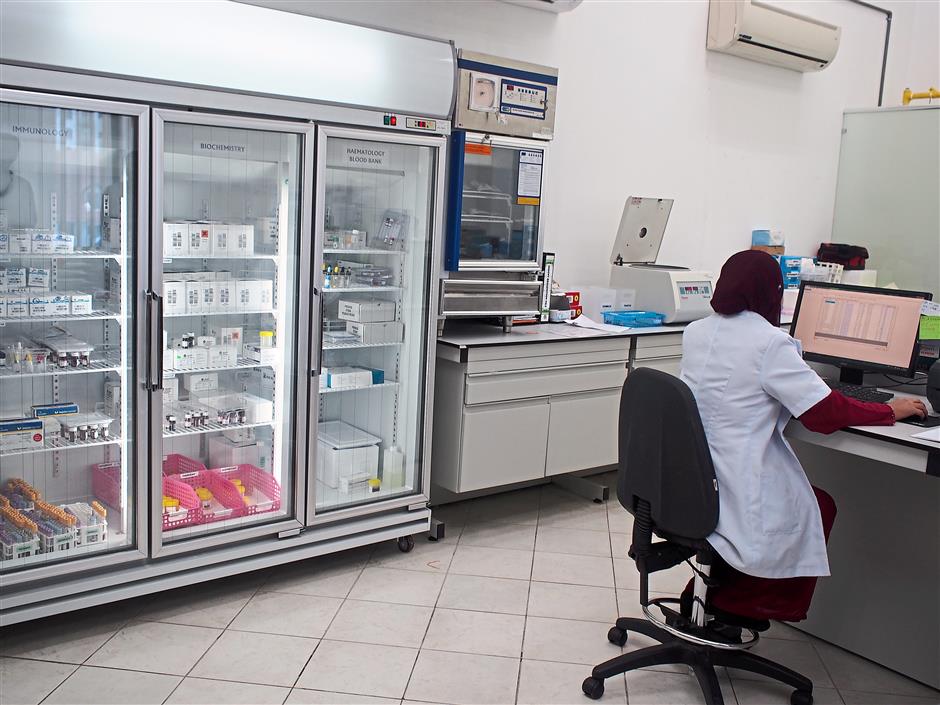 Knowledge sharing: A hospital worker is able to keep track of the various chemical samples and medicines in their laboratory using the hospital information systems.

One thing led to the other, and later, the private hospital cancelled their existing contract with another company and signed a new maintenance contract with Ravishanker’s company instead.

It is said fortune favours the prepared mind. In 2006, the hospital asked Ravishanker to develop completely new HIS software using the latest client-server and cloud-based operating system to cope with the growing complexity of software where each command is related to a larger sequence of other commands.

“To develop this system, we listened to domain experts, comprising doctors and other department heads, from nursing, finance, to customer relationship management, on how they needed the software to work according to their work flow,” Ravishanker says.

After investing about RM1mil and expanding to a team of 20, mainly comprising software engineers, to develop the HIS system in-house at their rented 3,200sq ft office in Cheras, Kuala Lumpur, Ravishanker says, a Japanese company specialising in healthcare invested in the company last year.

Catching the eye of a foreign investor is not surprising as the company’s HIS system has been implemented in over 20 hospitals across Malaysia, India, Vietnam and Indonesia in the span of nine years.

Hospitals can either rent the system with for RM25,000 a month with an upfront deployment cost of RM50,000 or buy the system for RM2.5mil, with he final price depending on the number of beds, processes and work flows involved.

Moving forward, the company is looking at adapting another product, called the clinical information system (CIS) to be cloud-based for clinics in the Philippines and Indonesia, followed by expanding its sales efforts of the HIS in Australia.