Help at hand: SPM school-leavers and their parents often have a tough time trying to pick the right pre-university programme, and this is where comparison website EduAdvisor comes in. — AZMAN GHANI / The Star

With the Sijil Pelajaran Malaysia (SPM) results set to be released next week, school-leavers – together with their parents – will be on the look-out for the best pre-university programmes to set them on their way.

Choices are aplenty in Malaysia, but trying to make a decision can sometimes be a very stressful process.

One local startup – drawing from their own experiences – has started EduAdvisor, a course comparison website that helps students compare pre-university courses in order to be able to make an informed decision.

“As students, we had trouble trying to find the programmes for ourselves.

“Our decisions were based on what our friends were doing. We just signed up where the majority was signing up,” recalled EduAdvisor co-founder Sue Loh.

Registered as Distinctive Education Advisor Sdn Bhd, EduAdvisor is the brainchild of Loh and Bernard Lim, former colleagues who quit their jobs to start the course comparison website. 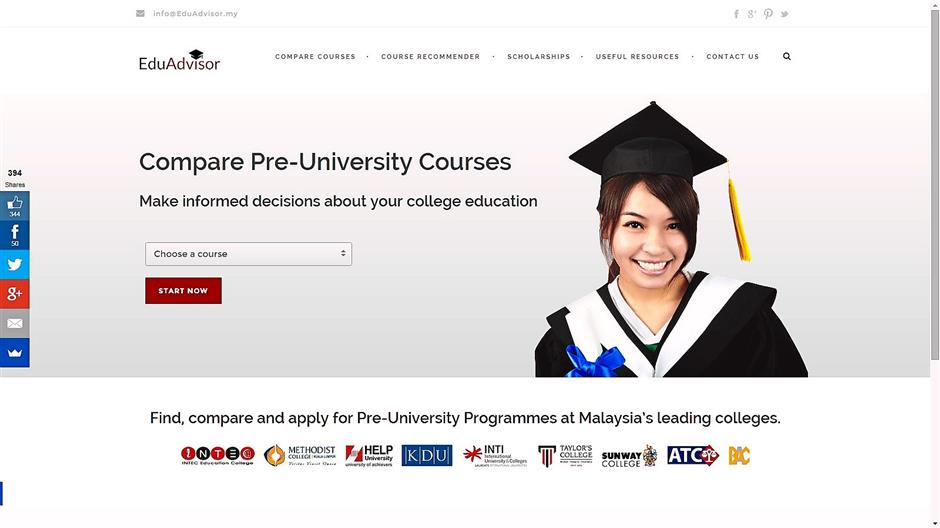 Click & compare: EduAdvisor makes it easy for SPM school-leavers to make comparisons and choose the pre-university course that suits them the best.

“Recently, I was looking at the options for my younger brother, and I realised nothing had changed. Information was still inadequate.

“I knew about A-Levels and so did he, but there are so many other options these days. I spoke to Bernard, and he was going through the same thing with his sister,” said Loh.

The duo quickly realised that there was a gap in the market for secondary school-leavers in Malaysia, and started working on the idea together.

They got their website up and going by end of last year after compiling the various courses available for those looking to pursue their studies after SPM.

“We went to all the education fairs, and we visited colleges too.

“Some of these visits were under the pretext of looking for colleges for our siblings but it was actually information-gathering,” reveals Loh. EduAdvisor is currently self-funded, with the duo working with an angel investor to ensure that everything runs smoothly.

However, they are tight-lipped about the amount that they have had to invest in the business.

Also mentoring Loh and Lim is Lee Ching Wei of iMoney. Headquartered in Kuala Lumpur, the iMoney Group is a website that allows users to compare and apply for financial products.

Every day, they reach more than 450 million consumers.

Given the similarities between the two websites, one would say that EduAdvisor is being well mentored. Strong supporter: Lee Ching Wei, who is mentoring Loh and Lim, is from iMoney Group — a website that allows users to compare and apply for financial products.

Within the first six months of EduAdvisor’s launch, Loh said they had already helped thousands of students make informed decisions.

“It starts with a quiz. We test the students on their interest and their preferred course. Based on the results, we guide them,” Loh added.

EduAdvisor is still a business, of course, and it needs to be profitable for the founders. Looking at referral fees and advertising as a source of income – just like iMoney – Loh insists that all referrals will be unbiased and beneficial to the student.

“We cannot push a student who is more suited for Sijil Tinggi Pelajaran Malaysia (STPM) to do Australian Matriculation Programme (Ausmat) and vice versa. Each student is unique. They will have their own strengths and weaknesses,” stressed Loh.

“There are many factors that we will take into account before recommending a certain course.

“We look at interest, passion, capabilities and financial support. We will be an independent platform,” she added. Laborious process: Picking the right programme to pursue after SPM can be a real headache for school-leavers, as they attend education fairs and go from college to college. This photo is of participants at the Star Education Fair 2015.

With universities and colleges already taking note of EduAdvisor, Loh and Lim are finding it a bit easier to build their database.

Even though EduAdvisor’s immediate goal is to help school-leavers, the founders have not ruled out the possibility of expanding their website to help undergraduate and postgraduate students too.

“We really want to help students, but for now we are just looking at school-leavers.

“We will be expanding our website to help everyone in the near future,” said Loh.

The duo are also not actively seeking funding at the moment as the business is still in the early stages, but the rise of comparison websites in Malaysia has been attracting local and foreign investors. Elation: The results are out, and you’ve done all right. Now what? STPM? A-Levels? Ausmat? Diploma?

From shopping to healthcare, consumers can now compare prices and services before making a decision.

Companies, too, have benefited from the service as they can look at their competitor’s products and pricing, and offer better deals.

But it is not all rainbows and butterflies for such websites. Price comparison websites in the UK have come under heavy criticism recently for not showing the cheapest tariffs and not telling customers which deals earned them commissions.

Last year, the UK’s Financial Conduct Authority (FCA) found that some price comparison websites operating in the general insurance sector had failed to meet consumer expectations of them and, in some cases, the FCA’s regulatory standards.

Consumer groups across Europe have called for stiffer regulation to ensure price comparison websites are doing what they suppose to do without bias.

Although relatively new over here in Malaysia, comparison websites are something to take note of as they grow in popularity.

In the meantime, as 455,839 candidates await their results next week, EduAdvisor is sure to be one of the places school-leavers would be visiting immediately after receiving their results.