Virtuosos of the virtual

PRACTICE makes perfect, and thanks to advancements in technology, simulators are increasingly more able to allow people to experience virtually a setting or event to prepare them for what is to come in real life .

Someone at the forefront of this is Axon 313 Sdn Bhd chief executive officer Faisal Khawaja. Faisal founded the company with Nasir Rizwan Hashmi, the company’s managing partner, to create the Axon Hajj Training Simulator (AHTS).

“We saw the potential of developing Islamic content in Malaysia, and developing this simulator and launching it from Malaysia gives us better footing before launching it in other countries,” Faisal tells Metrobiz.

He says that the simulator, which simulates the whole Haj experience, will help people who are performing the pilgrimage to better understand and carry out the whole ritual properly.

The Islamic pilgrimage to Mecca takes about a week, but the majority of Hajj pilgrims stay in Saudi Arabia for around two to three weeks to complete several other rituals. The real-made virtual:Details can be seen throughout the simulation, up to the features on the roof of one of the mosques in Mecca.

“An imam (Islamic leader), after experiencing the simulator, shared with me that he trains people who are going for the pilgrimage for months and they still come back with blank faces. The imam also said they need something like this where words can be given the visual backing while teaching pilgrims,” he said.

Faisal added that people had told him that the “simulator would not be a luxury but a necessity” and that it is also an edutainment medium that caters to Muslims who cannot afford to go for the Haj and also for non-Muslims who want to get a feel of the Haj – one of the largest holy gatherings in the world.

With previous experience in developing control rooms and simulator training systems for oil and gas and defence industries, Pakistan born-Faisal said, prior to that he had also developed content with special visual effects and animations for television networks in Pakistan.

“We partnered with software and hardware companies from around the world to develop the systems,” he said. 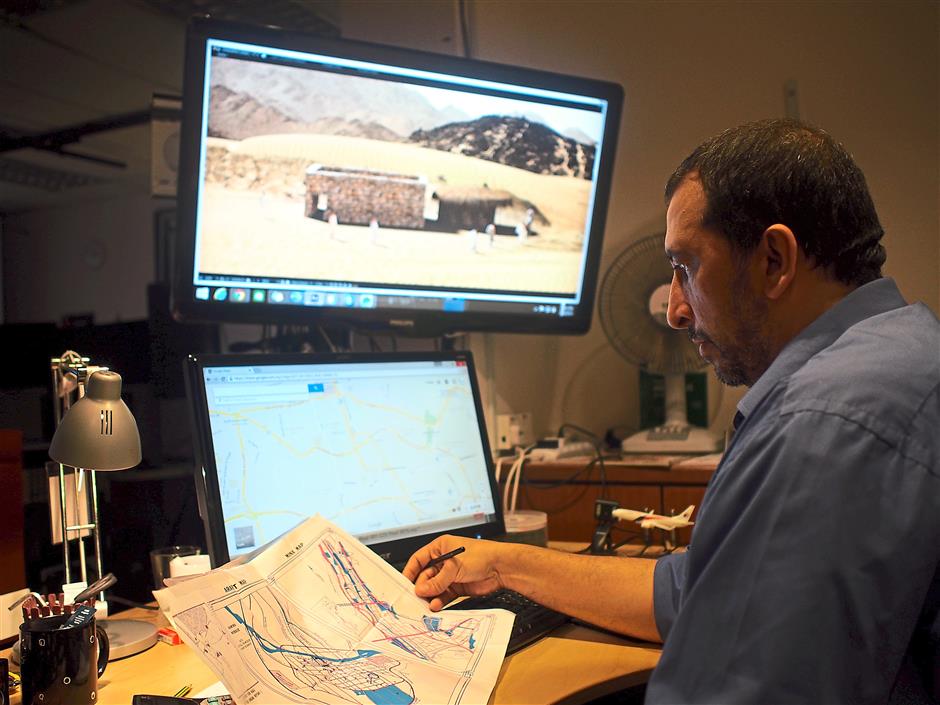 Geography meets science: The company had to ensure that the entire journey of the pilgrimage is recreated in the simulation and every detail that pilgrims would encounter appears in the simulator.

Incorporating the company in 2009 in an office in Cyberjaya, he said the company had to invest about RM1mil to purchase the equipment including projectors, sound systems and specialised hardware and software that custom built to create the right resolutions for the curved screens used in the simulations.

Faisal says he is also grateful for a grant from the Multimedia Development Corp that helped in developing the product.

Based on multi-projection technology, he said a large display is created by joining multiple projectors (two or more) seamlessly via geometry correction applications.

The maximum image size that can be managed from just two projectors is 12.2m wide and 4.8m high and this can be increased with additional projectors and other equipment.

“A computer has limited processing power. We purchased a lot of hardware and created new code that allows the load to be distributed. The curvature of the screens creates a reality-based image giving the audience a feel that they are at that location,” he says.

Getting all the required hardware was just one of the challenges to create the simulator.

To make the simulation as real as possible, the company required assistance from many parties, including documentary filmmaker and photographer Omar Faruk Aksoy, who did documentaries on the Haj and other broadcast programmes for National Geographic Channel.

“He was able to take very detailed images and recordings of over 20,000 textures from the various sites in Mecca which allowed us to recreate very fine and detailed texture as the part of the scenes,” Faisal said. 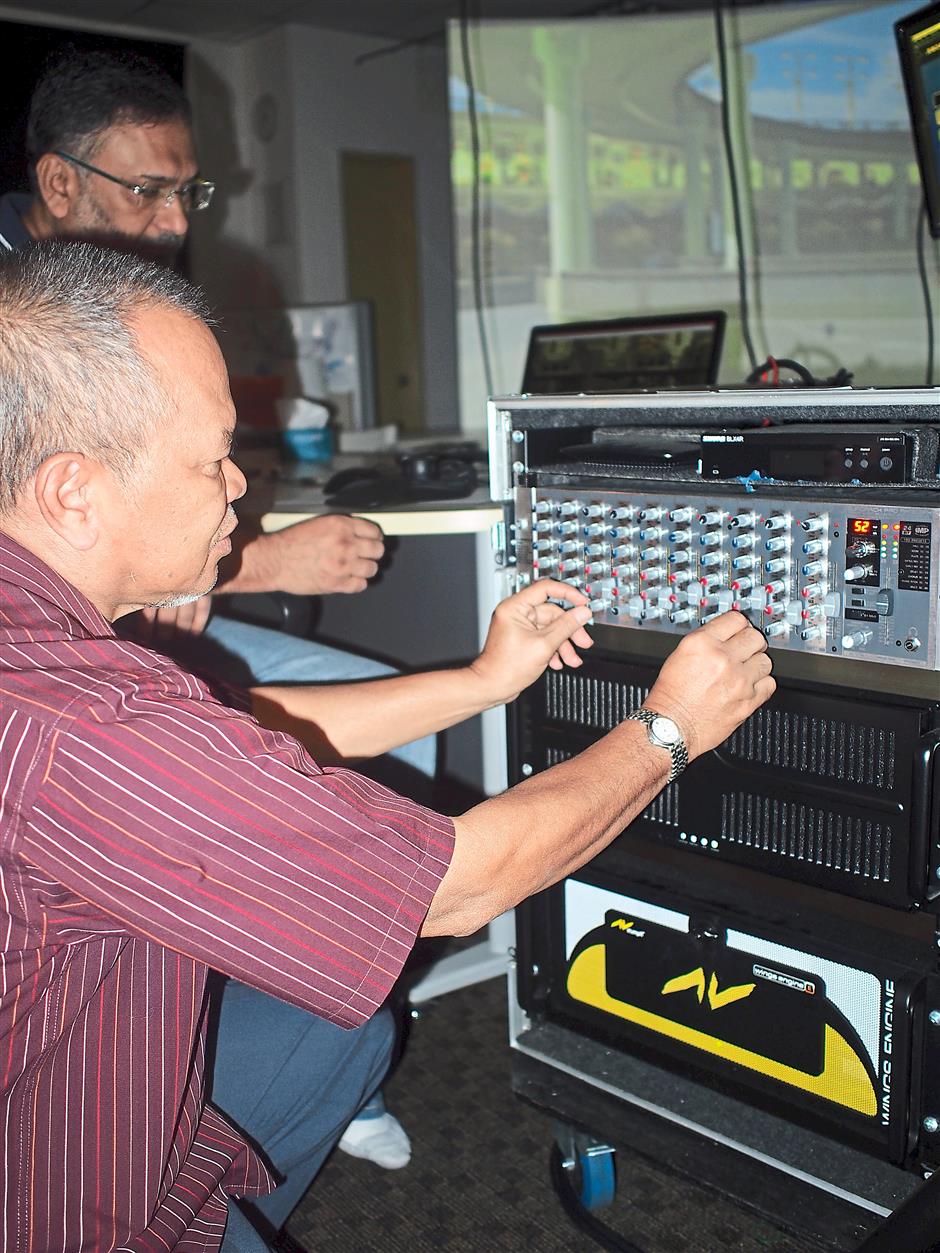 Made to order: The simulator requires many piece of customised equipment that were built according to Axon's requirements.

Axon also received help from the mayor of Mecca Dr Osama Fadl Al Bar to arrange for the approvals to get accurate data, textures and visas to Saudi Arabia.

“All environments are based on actual dimensions. Some of the work involved doing modelling and texturing of the and buildings involved so when you view the screen it is as if you are in Mecca,” he said.

Thanks to the work of 20 permanent and more than 100 contract employees to work on the project, from filming the journey, which is about 30km, to bring together about 10 terrabytes of data at breakneck pace for four years, Faisal says he is proud that the product is ready. 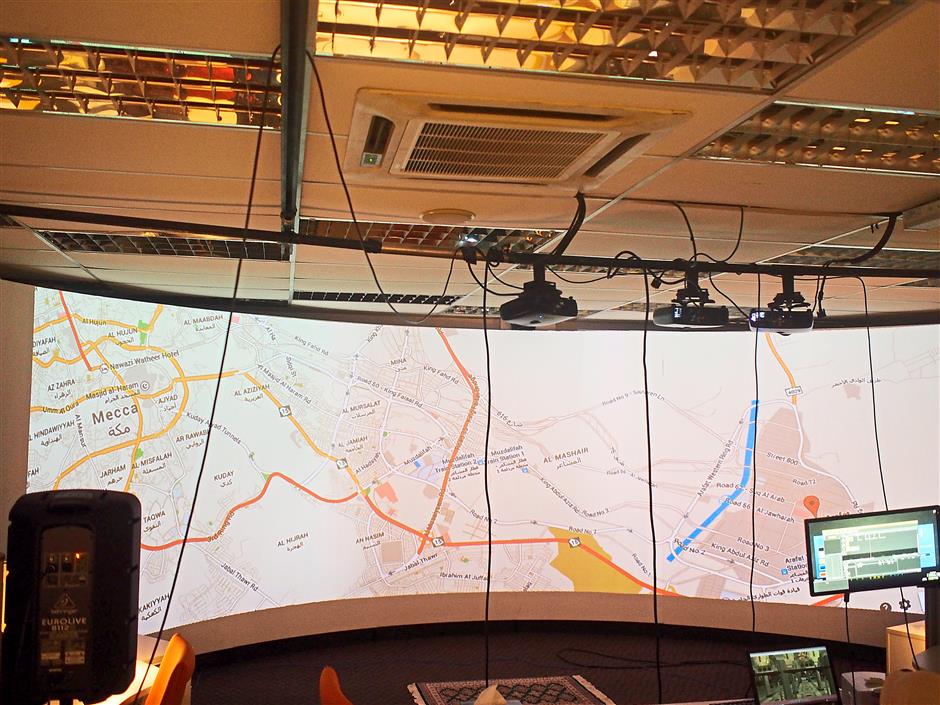 Eye in the sky: The large screens can be used to project large maps.

He is in no hurry to market the simulator because now his focus is now on educating potential clients on how it can be applied.

He knows he has a huge potential market with over two billion Muslims in the world. Last year alone, more than two million pilgrims arrived in Mecca.

This does not include the non-Muslims who would be keen to learn about this annual pilgrimage.

“We are looking at both government and travel agencies who are involved with Haj-related activities and we will discuss with them how this simulator helps them add value to their customers,” Faisal says.