Boutique offers Muslim clothing with a dash of style

Creative crew: The Indonesian designers behind the clothes availabe at Busana Timoer were present for the launch of the boutique.

THE ISLAMIC hijab, a veil that covers the head and chest, need not be plain and boring. If you want ideas on how to wear hijab in the most glamorous and fashionable way, go to Busana Timoer, a new boutique that specialises in Muslim designer apparel, hijab and accessories.

“We hope to live up to our motto, ‘Redefining hijab fashion’. Our collection is definitely more creative and interesting, something the contemporary and modern Muslim woman would appreciate,” says Omar Arif, the managing director of Cakrawala Communications, owner of the boutique.

Busana Timoer, the brainchild of Omar and Bob Lisastra, was set up a year ago with paid-up capital of RM250,000. The clothing brand is located on the first floor of the Bangi Sentral Business Park in Bandar Baru Bangi, and one of its main attractions is the organically-produced Shahmina collection — wool and silk shawls, scarves, wraps and the exotic Tusha stoles from Kashmir. 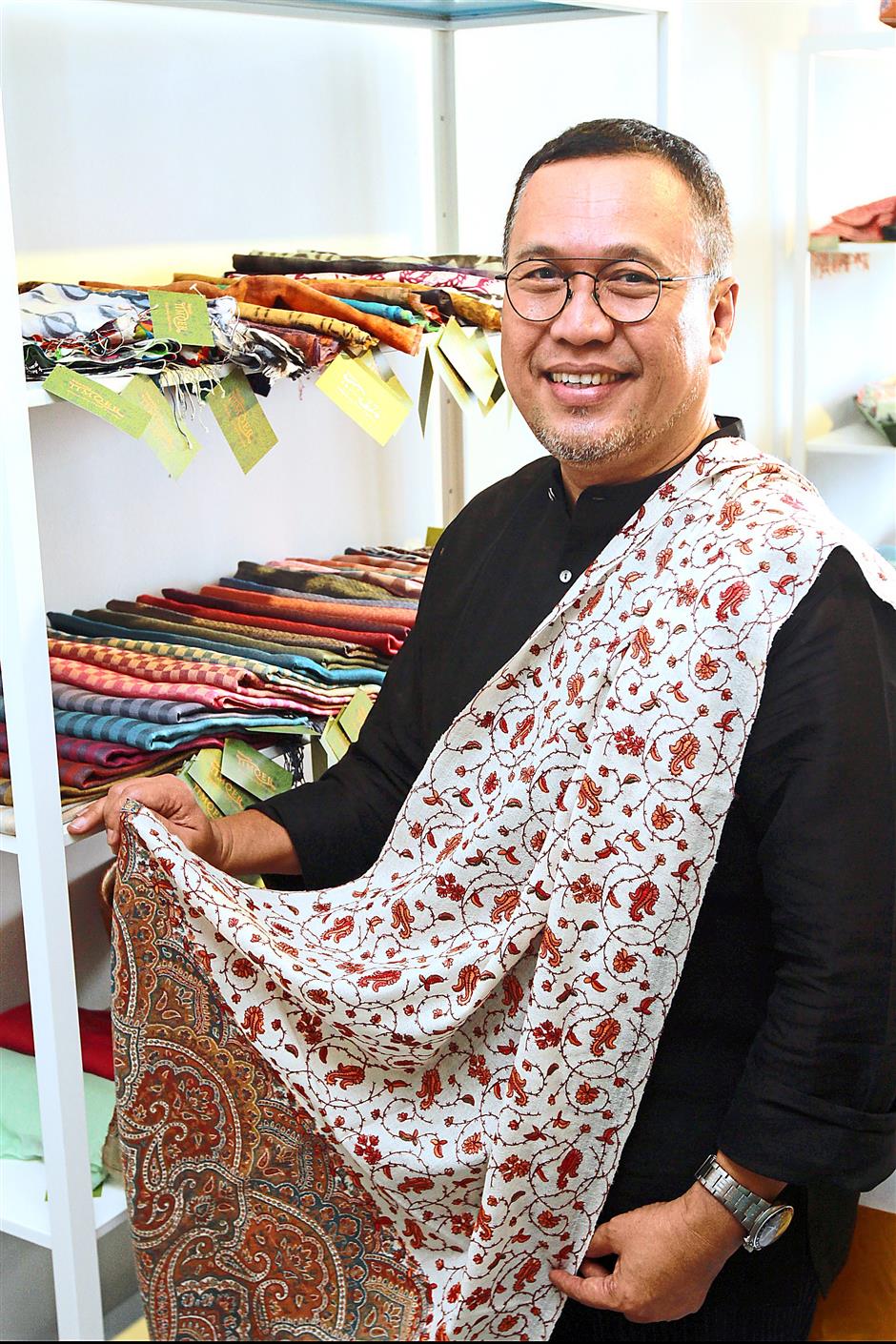 Pride of place: Omar with some of the beautiful Shahmina shawls the boutique stocks during the launch of Busana Timoer.

“We have a good collection of Shahmina shawls in our store. These are an exclusive, one-of-a-kind line of handmade, hand-embroidered Kashmir shawls. Shahmina shawls are finer than Pashmina shawls and woven with goat’s fleece, which is the finest softest fleece. The wool came from the underbelly of the goats and are only used for the finest shawls,” says Omar.

The idea for the boutique can be traced back to 2008 when Omar decided to start a small business after he was posted to Jakarta as Metro TV’s anchorperson. While there, he was inspired by Iva Lativa, a top designer and chairman of Muslim Designs Indonesia.

Last year, Omar finally plucked up the courage to set up Busana Timoer. One of the first things he did was to invest in Shahmina shawls. Omar says the quality of the shawls make them a bargain even though their prices start from a few hundred ringgit to a few thousand.

Busana Timoer was conceived with the aim of providing an alternative Muslim sensibility in fashion, apparel and hijab. During its launch recently, the boutique offered discounts to drive sales, marking down its goods by as much as 30%.

“We wanted to gauge the response. From a fashion standpoint; we know our collection is a bit fashion-forward, but the response has been good. Some like the subtle feminine colours, others like the more colourful vibrant colours which are a hit,” says Omar,who is also a fashion designer. 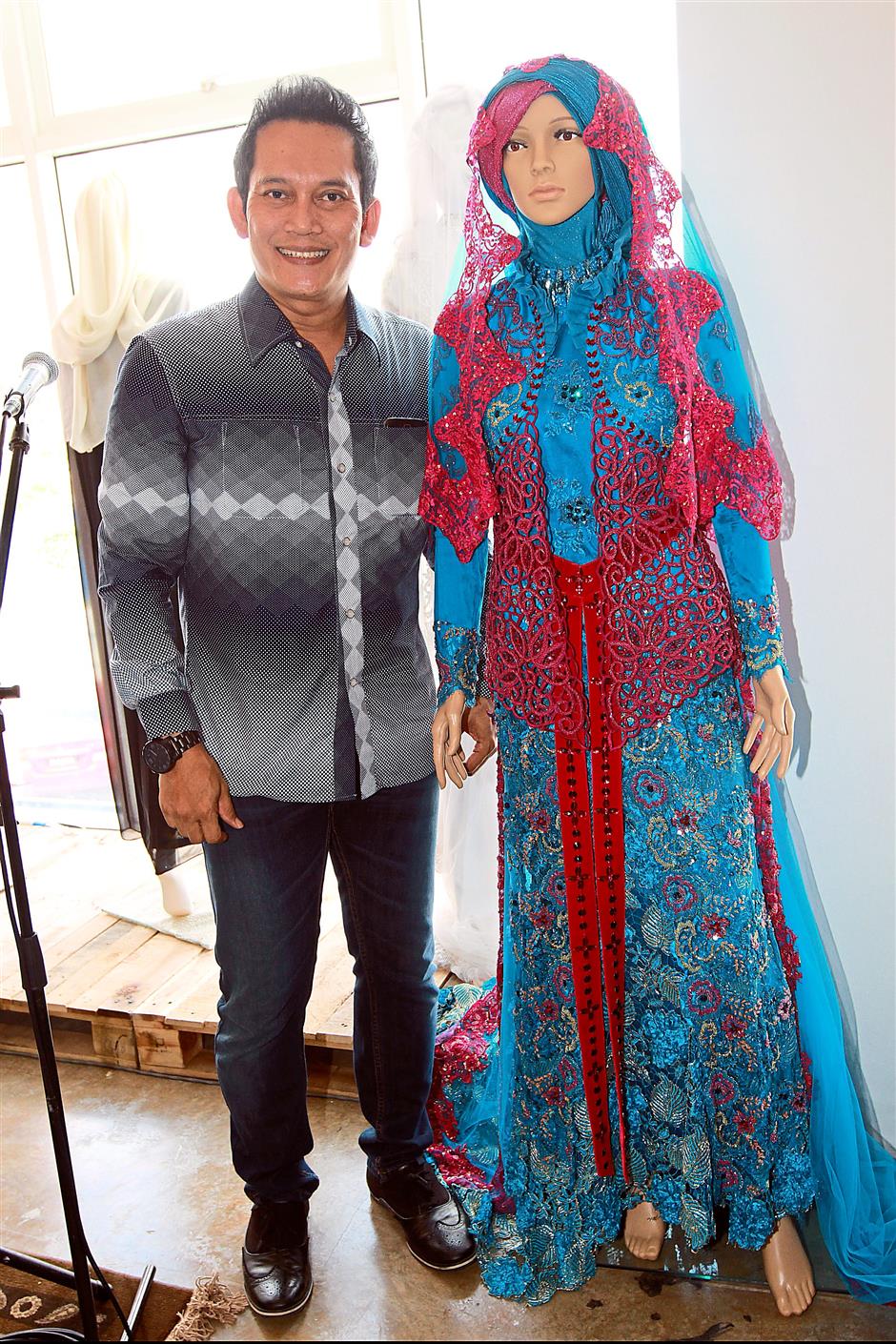 Creative dlair: Indonesian desginer Toera Imara with one of his designs.

The boutique also offers glamorous clutch bags made from Manicika beads from Ubud Bali and hand-drawn exclusive batik attire and caftans from Solo.

“We want to revolutionise the art of wearing hijab and Muslimah apparel. We show them how to wear it in a more glamorous and adventurous way. We have the works of talented Nusantara fashion designers all under one roof — each with a distinct style, using fine fabrics. The styles are very appealing and affordable,” says the 55-year-old TV news presenter and actor-turned-businessman.

One of the boutique’s designers, Tety Muniarti, used to be model for 20 years. Tety has authored 10 books on hijab and has a few boutiques in Jakarta, an online hijab shop (hijabah.com) and a boutique in Perth, Australia. “I’ve always been fascinated by romantic, feminine lace and the bohemian style. I decided to combine these two elements in my apparel and hijab wear,” says Tety who has travelled all over the world to give talks and demonstration on wearing hijab.

Another well-known designer Toera Imara, who specialises in bridal couture, has won several awards in his 18 years in the industry.

Toera, who creates Muslim wear and veils that feature Victorian style, romantic glamour and cosmopolitan chic, believes it is not wrong to revolutionise Muslim apparel.

“Muslim-wear was once regarded as conservative and boring. I wanted to change that and try to show how you can still be glamorous even when you are all covered up,” says Toera, who is the author of the book, Beauty Reincarnates: Muslim Wear and Veils. Toera has established himself as a Muslim designer because his evergreen designs.

It’s not easy to introduce something contemporary to Muslim fashion. Some people prefer the conservative style; some welcome any new Muslim fashion. I prefer to strike the right balance in my creations,” says Toera, who has boutiques in Bandung, Sukabumi and Jakarta.

Omar, on his part, intends to add more works by Indonesian designers to Busana Timoer. He is hopeful that revenue will grow in the next three months.