The radically revised interior of Hard Rock Cafe Kuala Lumpur was a move initiated worldwide by Dodds. This current look is a far cry from the days when it had checkered table cloths and old-school seats. —Photos: AZLINA ABDULLAH and VINCENT TAN/The Star

WHEN the first Hard Rock Cafe (HRC) in Malaysia opened its doors in Jalan Sultan Ismail, Kuala Lumpur on Nov 9, 1991, someone snapped a picture of the queue lining up to enter, in all its early nineties fashion glory, tucked-in shirts, hair and all.

Fast forward 25 years later, the facade has changed somewhat, with an al fresco section, the long bar has been shifted to another part of the floor while the interior and rock memorabilia were also changed during a 2008 revamp.

As 10.30pm approached on Nov 8, tables and chairs were cleared to fit a sold-out crowd of over 600, all cheering rocker/actor Awie on stage, as everyone celebrated Hard Rock Cafe (HRC) Kuala Lumpur’s 25th anniversary.

But for HRC Malaysia founder chairman Tan Sri Syed Mohd Yusof Syed Tahir, it feels like just yesterday when he was clad in black shirt and jeans and a sparkling red jacket cutting a huge cake in the shape of an electric guitar back in 1991.

“One of our long-standing philosophies is to welcome everyone, serve all and love all and maintain our service standards,” said the entrepreneur, and this has also extended to the menu.

“Aside from our steaks, burgers and ribs, we have also expanded our menu to include local favourites such as satay, nasi goreng and mee mamak, and I daresay the nasi goreng is one of the best in town,” said Syed Yusof.

Syed Yusof says it was just like yesterday that he wore a red jacket and cut a giant cake in the shape of a guitar to celebrate HRC's opening.

Right from the beginning, HRC Kuala Lumpur became a popular venue for music lovers to listen to live bands, but the place has also established itself as a popular family venue.

“If you come on Sundays, you can see families celebrating birthday parties and other occassions due to the brand name,” said Syed Yusof.

Over the years, Syed Yusof, or “Jojo” as he’s familiarly known to friends, has brought in big entertainment names to play in HRC ranging from BB King, Gloria Estafan and Ricky Martin to Linkin Park and even the late King of Pop, Michael Jackson.

And he is still bringing in the names, albeit with an ‘Oldies’ theme, with the likes of Dan Hill, Johnny Tillotson and perhaps Barry Gibbs next year, though that is still in discussions, he added.

Blues legend BB King (seated), signs a CD for Syed Yusof in this copy of a picture from 1992, when Hard Rock Cafe was barely four months old.

Of course, brand name is one thing, but the other is the manpower, with stalwarts such as Ng Lee Chow, Mohd Yunus Ali Akbar, Tang Swai Lan and Azmi Hassan, who have been with HRC Kuala Lumpur since day one or even before.

“We treat our staff well, and have become like a family,” said Syed Yusof, who looks forward to the future, and perhaps more opportunities.

“When we think about everything we have done in Kuala Lumpur, the many dishes we served, the performances held and guests we have served, there is an overwhelming sense of pride and excitement for the future,” he said.

When Ng joined the newly-opened HRC Kuala Lumpur as a cashier, never did she imagine that she would see the late Michael Jackson up close and personal a few years later.

“The whole dining area here had been sealed off once for a party with some orphans.

The facade might have changed and a new al-fresco section added, but the crowd is still lining up to check out Hard Rock Cafe Kuala Lumpur 25 years later.

“He came down with his lower face covered and wearing sunglasses,” said Ng, who was on cashier duty during that memorable week.

Ng recalled fans were camped along Jalan Sultan Ismail, and if Jackson so much as opened the window and curtains to wave, the screams could be heard despite the heavy glass panelling.

“What attracted me was the salary and benefits, plus this was a world-renowned brand,” Tang, who started as a commis chef and worked her way up, said.

Tang and her hot kitchen colleague Azmi Hassan both recalled working in Stadium Merdeka, churning out salads and hot meals to feed Jackson’s entourage, the back-up dancers, musicians and crew.

Syed Yusof (centre) or 'Jojo' as he's known among friends, talking with two of his four longest- serving employees who joined before, or just as HRC opened. Both Ng (left) and Tang (right) have served 25 years with the music-dining establishment, rising to become senior figures in HRC Kuala Lumpur's cold kitchen section.

“You need passion and dedication to work in the kitchen.

“Why else would you be standing nearly 14 hours in a hot environment churning the same meal day after day,” laughed Azmi.

Chief stock-keeper Mohd Yunus Ali Akbar, who started as a receiving clerk, said to work for 25 years with Hard Rock, the easiest way to see if you were a good fit was to see how well you and your colleagues got along.

“Still, the craziest and most happening time was Michael Jackson, because half of us were sent to the stadium, and the other half were still carrying out our duties here, but it was fun,” Yunus recalled.

For Dodds, the success of Hard Rock Cafe Malaysia's presence in Kuala Lumpur has been a praiseworthy achievement in the face of the cut-throat scene that is the Malaysian F&B scene.

“Twenty-five years ago, Jojo cut the cake and brought in Air Supply to wow the crowd.

“Now, Hard Rock Cafe KL is still going strong, and getting stronger, with hotels and restaurants throughout Malaysia.

Air Supply's Russell Hitchcock (on mike) sings to the crowd while Graham Russell plays on the guitar at the back at HRC during the early years.

“We are very happy he is cutting another cake again,” Dodds observed, before flying off to check on the Hong Kong outlet. 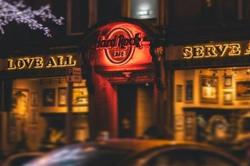