Leisurely day out with loved ones

By SHALINI RAVINDRAN and DINESH PARAMASIVAN

THERE is no better time to explore Kuala Lumpur than during the festive season.

This Hari Raya Aidilfitri is no different with people from far and near taking advantage of the public holiday and clear roads to organise get-togethers and spend quality time while checking out some of the city’s centre’s popular tourist spots and hidden gems.

“It is not easy to get everyone together. So, we decided to utilise this Hari Raya holiday to have a picnic in the park.”

Viviana Shield, 21, said this was the first time they had picnicked together.

“The environment here is amazing and despite the hot weather, there is a nice breeze.

“We all had an awesome time and it was a perfect setting for a get-together,” she said.

The usually busy intersection of Jalan Tun Razak almost devoid of traffic at 11am on the first day of Raya. — Brian Moh/The Star.

Regular visitor Jacelyn Tan, 29, said it was a different experience being at the park with his good friends.

“I usually come here to exercise but sharing laughs while chilling with my buddies was priceless.”

Also spotted was Sumathi Nagappan, 42, who was there with her three children – Ojashinee Ganesh, 21, Huthashiinee Ganesh,16, and Gayoth Ganesh, 14.

She said the Hari Raya holidays gave them a chance to spend some quality time together.

“Normally, the children will always be busy with their daily routine so occasions like this give us an opportunity to interact,” she added.

Ojashinee concurred that the siblings did not have much time on normal days.

“I have a busy schedule at university and my brother and sister are also busy with tuition and their school’s extra-curricular activities,” she said.

Another family enjoying Bukit Kiara Park was Jacob Gwee, 41, who was taking a morning walk with his children, Beatrice, 5, Eunice, 9 and Sincere, also 9, on the second day of Hari Raya.

“My children have always wanted me to bring them here.

Others seized the opportunity to drive into the city centre during the public holiday.

Although most of the main roads and highways leading to Kuala Lumpur were relatively empty, areas such as Bukit Bintang were full of people.

Anusha Perumal, for one, decided to take advantage of the near empty roads to visit Sungei Wang Plaza.

“On other days, it would have been a hassle. I wish it was like this every day,” said the 43-year-old from Bandar Sunway, Petaling Jaya.

On the MRR2, traffic from Taman Hillview to Zoo Negara was heavy too.

Mohd Khalid Bashir said the crawl was due to motorists double-parking to buy Hari Raya goodies being sold by the roadside.

“This place is known for lemang and ketupat, but there is no proper parking,” he said.

Although there was no traffic congestion on the Federal Highway, there was still a large number of vehicles.

Jasmine Tan, who was travelling from Klang, said it took half the usual time for her to get to Petaling Jaya.

“On a normal day, it would have taken me almost an hour-and-a-half, but today, I arrived within 30 minutes,” she said.

Taking in the sights of KL 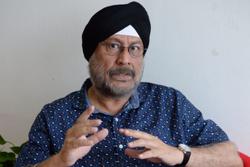