A variety of ingredients which are carefully selected to give diners a quality dining experience. — Photos: SAM THAM/The Star

Hotpot meals are simply likeable and appeal to many Malaysians, judging from the number of restaurants serving steamboat.

For some diners, the soup varieties and its taste are factors determining whether they will return while others consider the extensive condiments that go along with the soup as well as the price.

Co-owner of the restaurant, Ang Yoke Ching said idea of starting a Japanese-inspired steamboat restaurant was because she loved Japan and enjoyed Japanese food.

“Shabu-shabu is unique and we wanted to introduce it at our restaurant but featuring our own style.

“There are many steamboat restaurants in Malaysia but only a few have Japanese-inspired soups.

“Here, we have shabu-shabu which is clear soup, sukiyaki, Japanese curry as well as kuro signature broth,” said Ang adding that the other co-owners were brothers Alvin and Daniel Han. 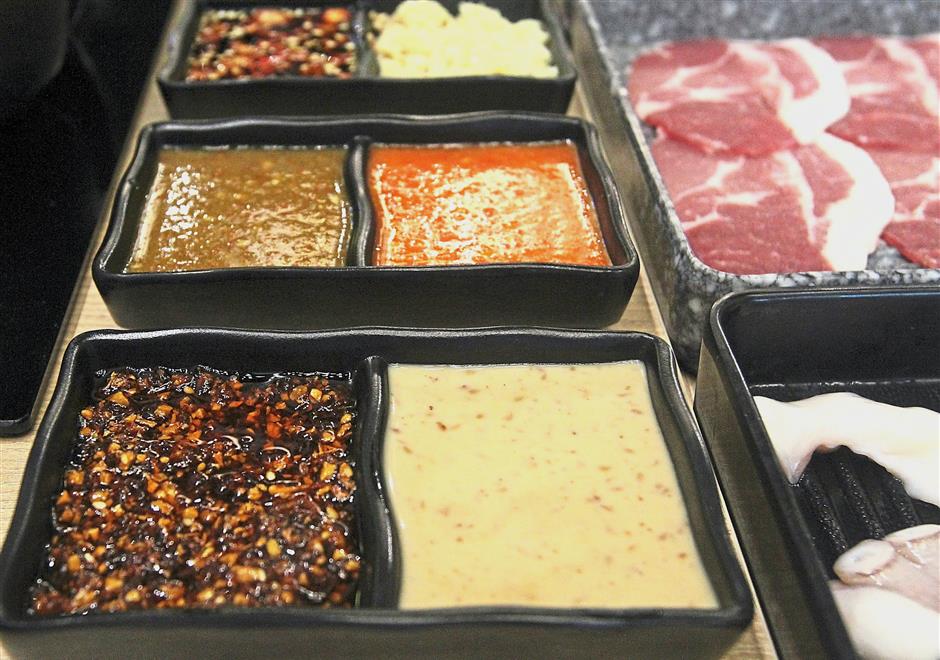 Different kinds of sauces to enjoy with your selection of meat, seafood and vegetable.

Diners at Kuro can enjoy a selection of meat but pork is the restaurant’s main highlight.

“That is also why we named the restaurant ‘kuro’. Our signature meat is the Japan bred Kurobuta pork.

“We also have Australian-imported beef and lamb as well as chicken and seafood,” she said.

Kurobuta means black hog in Japanese and comes from the Black Berkshire pig and its meat is known for its quality and marbling.

The four different soups are distinctive in taste.

My favourite was kuro signature broth. This mild pork broth is somewhat sweet and its flavour gets richer as various ingredients are added into the hotpot.

The sweetness of the broth is a direct result of the kuro which is known for its smooth texture.

Those who prefer something spicier can opt for the Japanese curry which is quite rare when having steamboat.

For a more luxurious fare, the restaurant is offering its premium Japanese Wagyu Beef Buffet priced at RM338 for adults and RM169 for children.

The thin Wagyu beef slices, graded A3 or A4 in marbling, got cooked in an instant. When dipping Wagyu slices into the soup, be careful not to overcook it.

Just gently immersing the meat in the soup briefly does the trick as one gets to enjoy its full flavour when some parts are still rare.

The lean meat with decent marbling melts in the mouth, leaving a luscious creamy taste on the palate.

The restaurant is also offering ala carte giant fresh water prawns for RM50 per piece, and RM88 for two.

The prawn is huge with fleshly meat that easily detaches from the shell when cooked.

All the meat and seafood served, here, taste fresh and you can either eat them with or without the accompanying sauces.

Sesame sauce, homemade chilli or bird’s eye chilli with soy sauce are the sauces the restaurant has in store.

Diners can expect an assortment of mushrooms, vegetables and meat balls as well as soba, kuro garlic fried rice, Nissin noodle and chikuwa when placing an order for steamboat.

Ang said the ingredients were personally chosen to ensure a quality dining experience for diners.

“The reason we are doing the all-you-can-eat buffet is for diners to enjoy the entire menu and eat whatever they want.

“We also provide diners a choice of different cuts of meat upon request,” she said.