Avina (left) and Kuljit are connected to each other as neighbours and share a love for cooking. (Right) Hyderabad chicken briyani is a once-a-week affair at Punjabi Cha Wala. — Photos: P. NATHAN/The Star

SERVING affordably priced and tasty food is a sure way to win over customers.

Add humility to the service rendered, and customers will return for more of their favourites.

This is true of Punjabi Cha Wala, where returning clients seem interested to savour what they have every other day.

I witnessed this, one afternoon, over lunch at the stall in Pearl Point Shopping Mall.

Stall owner Pall Singh and his wife Kuljit Kaur and their neighbour Amuthavalli Narasamy (better known as Avina) are quick to offer a big smile, and warmth in their voices when welcoming regular customers.

There is an elderly Chinese man who visits every day for his daily sustenance of fried tenggiri.

There are others who come for their fill of paratha or just for some masala tea with buffalo milk. My sister and her family are also regulars, as she says the food is cooked from the heart, and heads to Punjabi Cha Wala once a week.

After listening to her talk so much about the “aunties” who run the stall, I decided to check it out for myself.

The first thing I noticed was the contrast in colours of dishes served in stainless steel trays. There were several vegetables, cooked the way Malaysians like their veggies without killing the taste or flavour.

A sambal dish is usually on the buffet with either egg sambal, ikan billis sambal, sardine sambal or fish sambal.

Thick slabs of fried tenggiri marinated with chilli, turmeric and salt then deep-fried is a weakness, and always burns a hole in my pocket when dining at banana leaf restaurants.

While some places charge RM10 for their fish, the good folks at Punjabi Cha Wala charge RM5 or slightly more depending on size, per piece.

That’s two slices of fish for the price of one if I dined at the more popular banana leaf eateries in Petaling Jaya or Kuala Lumpur.

Savoury and appetising mutton peratal, chicken varuvel and fish head curry are some other dishes I look forward to.

Those who don’t like fat or bones in their peratal will like that it is an all-meat affair here.

“My wife is good in North Indian cuisine while Avina excels in South Indian, Malay and Chinese food,” said Pall. Charanjit from Punjabi Haweli offers curry mee and puri in addition to a variety of dishes.

Kuljit, who previously worked in a cake house and later a kindergarten, was urged by her husband to venture into running a food business.

Roping Avina, their neighbour and good friend of 13 years, on board has resulted in a stall that leaves quite an impression from the first taste.

The secret? Making fresh chapati and paratha upon receiving an order.

“We are accustomed to eating freshly made chapati and paratha so we roll them out when there is an order,” said Kuljit, who learnt cooking from her mother at the age of 11.

The breads are also value for money as the chapati costs RM1.60, plain paratha (RM2) while the potato, cauliflower, onion, methi, mint, radish and carrot paratha cost RM3 each. The cheese paratha is priced at RM4.

Multi-lingual Avina learnt cooking from her father who used to run a food shop in Cameron Highlands.

“I learnt from my dad and also from customers who came to our shop.

“I enjoy cooking and I tak malu (not ashamed) to ask customers for recipes,” said Avina.

Fresh buffalo milk from Salak Tinggi is used to make milk tea with up to 15l consumed on a good day. 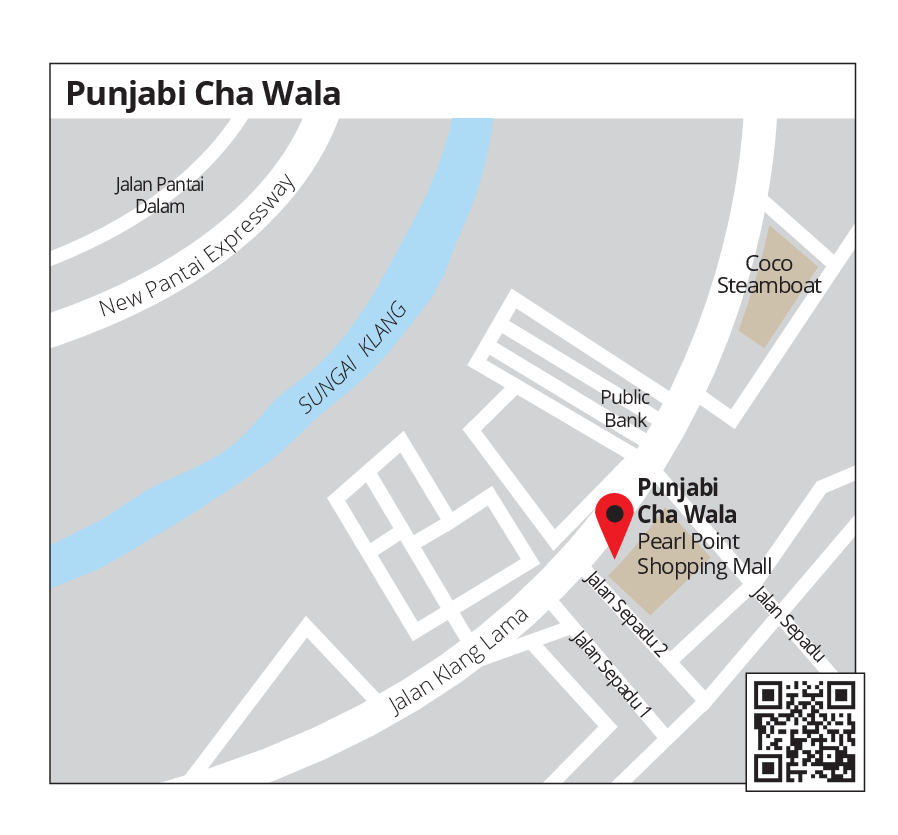 Now, Punjabi Cha Wala (stall No 2) is not the only stall serving Indian food at the food court.

Walk down a little further to stall No 10 and you will see Punjabi Haweli, which is managed single-handedly by Charanjit Kaur from Amritsar, Punjab.

She, too, has 10 vegetable and meat dishes as well as puri, corn chapati and curry mee.

The chapati and paratha here are also made hot off the griddle, and Charanjit also makes pipping hot tea for her customers.

Besides the savoury treats she cooks daily, Charanjit also makes samosa as well as giant ladoos and sugee barfi for those with a sweet tooth.

Their stalls are at the food court on the second floor of the mall in Jalan Klang Lama.

Both stalls are open for lunch and dinner but it is advisable to savour the lunch fare.