Abandoned cars among issues outside condo in Segambut

Some abandoned cars have had their parts stripped off.

Sri Putramas 1 condominium management committee president Kenny Lim said there had been at least seven cars abandoned along the 150m stretch outside the building in the past two years.

“There is about 11 more along the main road of Jalan Putramas.

“We have been complaining to Kuala Lumpur City Hall (DBKL) but nothing much has been done. Our last complaint was in March.

“DBKL officers will come over to issue summonses and notices to remove the vehicles but they have not towed them away.

“When contacted, DBKL said their depot was full or the roads were privately owned.

“Like many condominiums in the city, there is never enough parking in the building, so there is a spillover of cars in the surrounding. These abandoned cars are taking up space,” he said.

At least seven cars are left along Jalan Putramas 1 since 2015.

Lim said Jalan Putramas 1 had also been neglected in other aspects by DBKL.

“Illegal advertisements are put up on trees and once when our cleaners took them down, they were threatened by two men on a motorcycle that their hands would be chopped off if they did so in future.

Sri Putramas 1 condominium building manager Mohd Asnawi Mohd Norjaini said some of the abandoned vehicles were used by expatriates who had left the country.

“Some cars may belong to car rental companies and they have not been returned. Some cars belong to locals who have moved out too,” he said.

A check by StarMetro showed some abandoned vehicles were issued notices by DBKL dating June 10 and some vehicles had parts stripped off.

Segambut MP Lim Lip Eng said abandoned vehicles was a nationwide problem and the Government should find a permanent solution.

“There is a need for a mechanism to dispose off such vehicles. I will bring it up in Parliament next month,” he said. 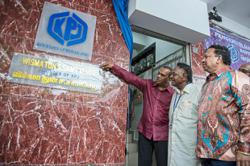