A 39-year-old technician, who sustained serious injuries after a tree uprooted and fell on him while he was on his motorcycle, is appealing for public donations amounting to RM70,000 to pay for his medical bills.

Jeffri Abu Kassim, who was admitted to a private hospital in Ipoh, said initially, he was taken to a government hospital where he stayed for 52 days after the incident on Sept 28.

The employee of Masif Latex products Sdn Bhd in Bercham said he sustained fractures at five different locations on his left arm, leg as well as suffered from a badly infected wound at his knee pit.

Jeffri, who lived in Pusing, claimed that during his stay at the government hospital, his wound was not getting any better and the doctor there told him that if the situation remained, his leg would be amputated.

“I was shocked and speechless when the doctor gave me that option because I have a family to feed and I am neither suffering from diabetes or gangrene.

“That was when my wife rushed to seek a second opinion from a doctor at a private hospital, who said no amputation was required and soon after that, I got myself discharged from the government hospital.

“I hope kind Malaysians will help me pay for the cost I require for skin grafting, humerus lock up plates and physiotherapy,” he said from his hospital bed last Friday to state MCA Public Services and Complaints bureau chief Jimmy Loh.

Both Loh and Chan are assisting Jeffri in the donation drive, as well as speaking to the authorities concerned to provide some form of aid.

During the incident, Jeffri who was on his way back home at about 7.30am after completing his night shift was pinned under the falling tree in Bercham.

He was sandwiched between his motorcycle and the tree and thankfully other motorists had helped to pull him out before they called for an ambulance.

Jeffri’s wife Zaleha Karin, 37, a part-time cook at a restaurant said she had used up all their savings and had pawned all of her jewellery.

“I can just hope and pray that kind Malaysians will help my husband.

“I have two school-going children and it is important that my husband is well again,” she said, adding that her husband’s employer has also helped financially.

Zaleha said when her husband was shifted to the private hospital he was kept in isolation for 10 days and the wound has now started to show improvement.

Loh said he would be writing to the Ipoh City Council to see how best they could help with the medical claim.

“I will speak to the bureau’s lawyer on how to go about this case, since the tree was on the main road, which falls under the jurisdiction of the council.

“In the meantime, the public can send cheques to the Perak MCA headquarters with Jeffri’s name written on the back until Dec 17,” he added. 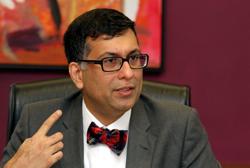 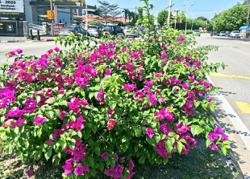