Shell Malaysia staff posing for a photo with Malaysia’s well-loved cartoonist Lat in front of his mural, The Kampung Boy.

Those murals captured the artists’ interpretation of progress and the Malaysian pioneering spirit, with some illustrating familiar Malaysian scenes and landmarks, expressing the nature of our society.

Azman was confident that the murals would touch people’s hearts and souls when they visit Shell stations.

Azman says the artists' work reflects the values that Shell subscribes to.

“The murals will be displayed at the selected stations for 12 months to provide photo opportunities for visitors.

“They are also a reminder to us and our customers that we have been here for the past 125 years,” he said.

“We believe these values unite Malaysians across the country, and will propel the nation forward into the next 125 years,” he said in his speech at the official launch at Publika Shopping Gallery.

Lat said his inspirations always came from children, like the characters in his famous comic book Kampung Boy.

“Every child is gifted with courage, curiosity and limitless imagination that enables them to dream big,” said Lat.

He said dreams are powerful, as featured in his mural The Kampung Boy, which showed imaginary flights with friends and family in homemade box carts, an illustration of nostalgia and the progressiveness of youth.

Besides its first art project, Shell will also be hosting a nationwide treasure hunt in September. 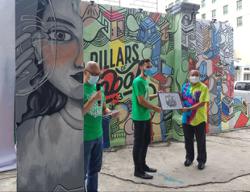