Feasibility study must be done on refloating shipwreck, says Rais

Rais ﻿pointing to the wreck ﻿at the Sungai Pahang riverbed. – Bernama

PEKAN: Efforts and costs to refloat the Paloh Hinai shipwreck will have to correspond with its historical value, said Socio-Cultural adviser to the Government Tan Sri Dr Rais Yatim.

He said a cost study would be conducted and the matter would be forwarded to Prime Minister Datuk Seri Najib Tun Razak to see whether it was feasible to raise the wreck from the Sungai Pahang riverbed.

“I am sure this will be of interest to the prime minister, who is the Pekan MP. I am certainly interested in seeing the wreck refloated from the historical and heritage aspects,” Dr Rais said after visiting the site of the wreck near Kampung Tanjung here.

He said any work on the site would require cooperation between the National Heritage Department, Prime Minister’s Department and the state government.

The shipwreck emerged recently after the water level of Sungai Pahang dropped drastically due to the El Nino phenomenon.

Rais said the discovery was significant for Pahang as it was evidence that the river was once used as a major trade route during the colonial era.

“This shows that Sungai Pahang was the only one river in the peninsular that was navigable. From here, we may draw some inference on why Sungai Pahang is no longer used as a shipping route. Perhaps, it is due to our neglect of the environment.

“What is the reason there are no longer ships plying Sungai Pahang when rivers like the Mississippi and the Yangtze are well preserved and still used for shipping? We shall do our homework on this,” he said.

Rais also said it was suspected that there were valuable cargo in the wreckage.

Meanwhile, the National Heritage Department recommended that the shipwreck be salvaged and placed in the state museum’s water transport gallery.

Its public relations officer Elviza Marjali said the department was recommending that the area be gazetted as a protected zone under Section 64 of the National Heritage Act 2005 with permission from the state authorities.

The department also suggested for further survey works and underwater archaeology salvaging to be carried out comprehensively and in detail.

Elviza said in an e-mail response to The Star that the wreckage was that of a steel steam engine ship as proven by the discovery of a boiler connected to the engine compartment.

She added that among the other items found were a steam valve and safety valve, a lower deck beam which was part of the ship's bridge, a long steel beam that resembled a drive propeller shaft and various objects such as a lifeboat davit, line fittings and a safety gate at the sides of the ship.

Elviza said further studies would be conducted to identify the ship's name and the history of its route. 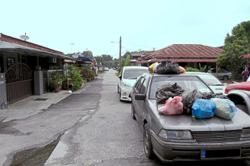